OpenELEC (Open Embedded Linux Entertainment Center) is a lightweight Linux distribution aiming at turning your computer or device into a Kodi media center. So instead of installing Kodi as a program or app on a desktop OS or Android, you could have a dedicated machine, which boots faster, has lower requirements (90-125 MB required for a full installation), and supported external tuners to watch live TV, as well as PVR & timeshifting functions out of the box. The developers have now announced OpenELEC 5.0 release, the successor of OpenELEC 4.2. 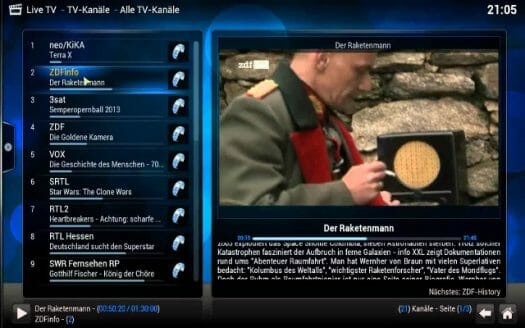 Key changes for OpenELEC 5.0 include:

Beside build for the CuBox devices, OpenELEC 5.0 can be downloaded for x86 (32- and 64-bit builds), and the Raspberry Pi boards. You may also have seen OpenELEC images for Amlogic devices, but these are not officially supported by OpenELEC “mainline”.

Due to the naming change from XBMC to KODI with this release, the developers recommend you back your XBMC data, and perform a manual update to upgrade to OpenELEC 5.0 in order to avoid a potential loss of data.

I’ve tried OpenELEC 5.0 on both my rasberry pi and my CX-S806. It runs very well on my rasberry pi. However, I would suggest not loading it on the CX-S806. The h264 video playback has not been perfected yet. I will be flashing back to android as soon as possible.

I just upgraded to that version you posted the link to. I have the same issue. I’m guessing it might be a fps bug. When i go into system when playing a video it shows 90-260fps. It does not show these high fps on my htpc kodi 5.0 or my rasberry pi openelec 5.0 installs.

Why would you go back to Android on the CX-S806? Wouldn’t going to a different Linux version with Gotham be best? Is Gotham not working well these days?

What boxes. exactly, are classified in the x86 category?