I wrote about ActDuino S500 last month. It’s a development board powered by Actions Semi S500 quad core Cortex A9 processor, but very few details were available, and release date and pricing had not been disclosed. EmbedStudio, a Shenzhen startup, has now launched an Indiegogo campaign (flexible funding) for their Lemon Pi board based on S500 processor. 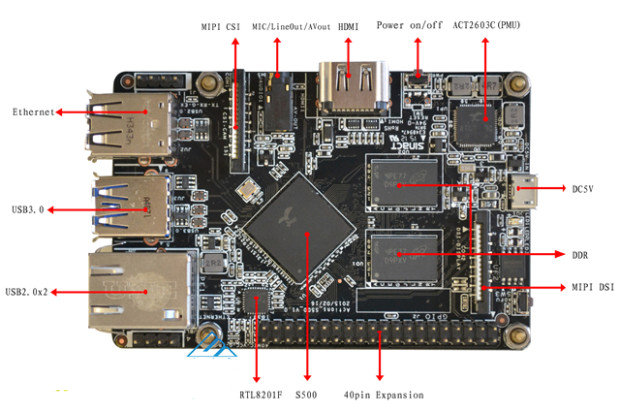 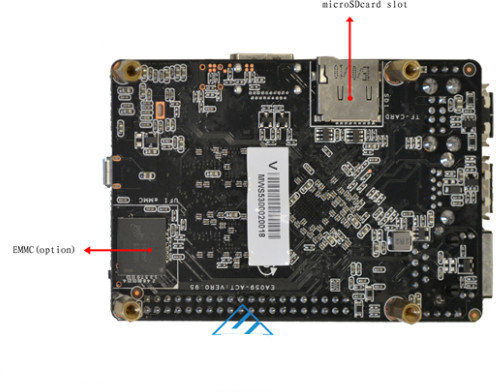 The board is said to run Android 5.0 and Ubuntu 12.04 using Linux 3.10 LTS. 3D hardware acceleration is enabled in Ubuntu too. They claim the source code can be found on github, but I could not find it (yet).

A $25 pledge for “Super Early Bird reward” should get you board, with a standard pledge being $35. Shipping via Hong Kong Post (Tracking not mentioned) is $5 extra to anywhere in the world. Most boards are scheduled to ship on August 2015, but a few beta? boards will ship as early as June.

They seem to have the ethernet and USB2.0 labels mixed up on the picture

PowerVR, argh, vendor lock in. This LemonPI has a life expectancy of 2 year max. Just like my Dell mini 1010 (Poulsbo).

Even the original PI with the Video Core IV from BCM has a better chance of a OSS GPU driver.

I Don’t know how Imagination Tech does it. But they keep on slithering in.

What does this mean on Indiegogo page?
*Please don’t remember adding shipping perk option with this perk in your total order

@Gabe
I think they just made separate rewards or shipping. That makes it unnecessarily complicated to pledge, but I understand if you pledge for a $35 board, you also need to add $5 (HK post) or $30 (DHL).

Any reason to favour this over existing options (Raspi/Hardkernel)?

This company promises on Indiegogo page a website that will be ready by April & now it’s the end of May, still no website.

@Phil
you are right
sorry, we make a mistake to label ethernet and usb2.0 position
thanks!

@onebir
usb3.0
quad-core A9 more powerful than A5/A7
imagination GPU that Apple use
android 5.0
Thanks

“please dont remember to add shipping costs with this perk”

that sense makes no sentence

Another ARM based board to the collection. There are SoCs out there with different cpus that have linux support (and other OSes).
Nothing new, it is the same as the other ones of its kind.

Well this is nice but with a PowerVR GPU thanks but not thanks. An open source for the rPi and rPi2 GPU is being worked on while there’s not such hope for PowerVR…

This limits the usability of the board IMO as there’s not reason to be sure you’ll have a working driver for the latest kernel or latest X or latest Mesa or a Wayland driver ….

Choice is always good but I don’t really see this offering much over the rPi2 … am I missing something ?

guy got PhD from US university and they wrote THIS? I’m sick of Chinglish and Chinese mentality regarding the quality (and accuracy) of descriptions.

I would stay clear. On top of that powervr….

🙂 I am stewar,not pino. I am sorry my chinglish bothers you. I will try to improve my english expression to be unstood. Many thanks.
🙂
@renw0rp

I mean $35 is cost of board.
$35 does not include shipping cost.
you will add shipping cost additionally when selecting perk manually.
@TC

because Imagination official GPU driver can only support ubuntu12.04 now.
later they will update to support 14.04
@ade

actually now it can only support 12.04
14.04 will be supported in the near future

because Imagination official GPU driver can only support ubuntu12.04 now.
later they will update to support 14.04

Well, this is a bad start, no?
(but no surprise here)
Your “near future” is what YEAR, exactly??

If anyone needs help with producing proper English technical documentation from Chinglish, we can help.

As the others I don’t see anything positive when binary imagination drivers are present.

It seems the Mali approach is a bit better? With user land blobs?

If they wanted better (free labor from) community support then they should have selected a much more open source friendly SoC platform to build this on than closed hardware such as Action Semi with PowerVR GPU.

I’d pay even more for that now, say $100, there are no good ARM64 boards out there. It would have been nicer to have one of that instead of this rPi2 competitor which has nothing important to offer in it’s favor.

I’ve also noticed there’s mention of a “PowerVR SGX544 GPU open source driver” which is very , very odd indeed. I’m guessing this is either an error or it’s about some sort of open source kernel module paired with a closed source userland blob.

because Imagination official GPU driver can only support ubuntu12.04 now.
later they will update to support 14.04

Well, this is a bad start, no?
(but no surprise here)
Your “near future” is what YEAR, exactly??

And it’s a flexible campaign. Maybe they won’t gather enough money, boards will be never sent out & you remain without money.

Gabe :
And it’s a flexible campaign. Maybe they won’t gather enough money, boards will be never sent out & you remain without money.

I stopped at Actions Semi, or was it Shenzehn? Point is i stopped, if any newbie reads this: don’t jump at the hopeful firmware, think you’ll get the option for 2gb ram, or expect it sent to you at all. I’m gagging that the crowd source site keeps this up. Andrd 5 is the new Honeycomb. @imagination stop. Just stop.

Dear Gabe, Firstly, our team believe we will succeed in our compaign with help of everyone who pay attention to us and support us, like you. We also thank anyone who don’t give financial contribution but give attention. Seondly, If we can’t achieve the $10,000 USD goal we set originally, we will still to sent out Lemon Pi to every contributer and make friend with everyone and reply every email sent to us. We will keep our promise for every contributer whom we treat as our first investors. We will not break heart of anyone who helps us. Although this… Read more »

sorry, we can’t give exact time, we can only wait for support from Imagination who is vender of PowerVR544

Many Thanks, please sent email to me.
[email protected]

I think only one HDMI connect can support digital signage, why not? thanks for your information

kernel mode of PowerVR SGX544 GPU driver will be open

@lemon pi thingy creator : reading these comments, and my own i wan’t to say that i think most of us are tired of the bait and switch. Whether it’s manufacturer A or B, you just happened to land in a forum full of people over the blatency of Asian continental board manufacturers telling us one thing and finding out the opposite AFTER weve paid. Or being shady with schematics knowing many consumers are not going to arrive in Guangdon province to hunt down 35.00 . so many sleek adverts but so little care that we actually read (and notice)… Read more »

@paul
I couldn’t agree more with your opinion. as what I said on campaign, “become one of the partners or volunteers partner or volunteer within our team EMBEDSTUDIO “. I warmly welcome anyone to help make this project more successful.
Please contact us [email protected];[email protected] for further detailed discussion.
Many thanks.

If this is an open source board, where is the datasheet for Actions S500 SOC?

The name of the product also is not very inspiring. Lemon has a negative conotation, according to merriam webster:
“a product that is not made well : a product that does not work the way it should” taken from:
http://www.merriam-webster.com/dictionary/lemon
You should have given another fruit name like Kiwi Pi, Pomelo Pi or Lychee Pi.

Dear Gabe,
Public datesheet is be preparing by Actions semi. When we get their authorized official public version, we will release immediatly.
Many thanks for your detailed explanation for one meaning of Lemon. actually we do not realize and have no ideas about it. We will consider your valuable advice seriously. Let us try our best to make Lemon Pi work well.

So you finished porting Ubuntu 12.04, does hardware video acceleration work under it(playing videos from KODI, VLC)?

yes, Ubuntu 12.04 with GPU acceleration and XBMC/KODI with hardware video decode all already run on Lemon Pi, we are fixing some bugs for it

recently ,I will update FAQ according to questions these days on campaign