EmbPower is a Taiwanese company that first focused on graphic cards, but has since then also developed other solutions requiring high GPU performance for military & aerospace applications as well as medical equipment. One of these products is TK1 Carrier Board with TK1 SoM powered by Nvidia Tegra K1 quad core processor, that can be encapsulated into TK1 PowerUnit industrial computer. 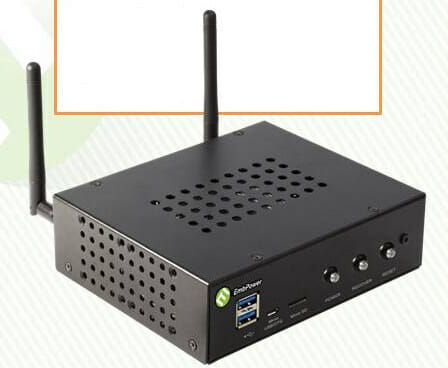 There are actually two TK1 carrier boards: the larger V1.2 with more ports and features, and the smaller V2.0 that is used in TK1 PowerUnit Box, but they share most of the same (preliminary) specifications:

There are also two versions of the industrial PC: PowerUnit and PowerUnit_w, with the latter adding 802.11ac and Bluetooth 4.0, and corresponding WiFi antennas as shown on the first picture.

The company mentions support for two 4K video output devices, and hardware encode and decode, but did not provide anything about software support, except in the comparison table below between TK1 module and Jetson TK1 board, which shows Android and Ubuntu BSP can be provided.

Contrary to what the table implies, Jeston TK1 does support MIPI CSI cameras, although maybe not with OV5640 sensor.

EmbPower’s Nvidia Tegra K1 solutions are available now, but the company won’t disclose pricing publicly. If you are interested in their Tegra K1 industrial computers, boards, or modules, you won’t find many details on TK1 SOM product page, but you can still contact the company there. You’ll be asked for your company details, project schedule and sales’ forecast.

In your article you are missing the world best implementation of the Tegra K1 done by CALAO Systems in an incredible SMARC short compliant module. The best quality with the best set of interfaces and furthermore reinforced in security..!

Going to be pricey. Now, if you’re doing something for business, it might be great- but it’s going to sting a bit trying to acquire this gem. Might be worth it to some, but for others…not so much so.

Says an employee working there.
LOL

@Nobody of Import
I’ve been quoted as follows: