Many Amlogic S905 TV boxes have been announced, and thanks to Videostrong, I’ve received my first Amlogic S905 device for review with their K1 Plus media player (aka KI Plus). Today, I’ll start by listing the specifications, before taking a few pictures of the device and its board. with the full review following up in a few days.

K1 Plus is one of the entry level models with 1GB RAM and 8GB storage by default:

I received the device by DHL in a retail package with the markings “KI Plus” and “Quad-core Android DVB” on the top, as well as specifications on the bottom. 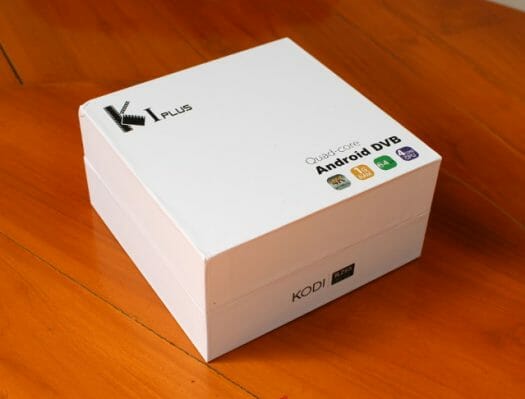 The device looks exactly the same as Videostrong’a previous models, such as K1 with S805, and comes with an IR remote control with IR learning function, a 12V/1A power adapter, an HDMI cable, and a user’s manual in English.

There’s again mention of “Android DVB” simply because there are optional DVB-T/T2, ATSC, and ISDB-T tuners for the device according to the user’s manual. The company also plans to send me a DVB-S2 version in a few weeks.

A closer look at the TV box shows the  four USB ports and micro SD slot on the side, and all other connectors on the rear panel: CVBS/ LR audio jack, Ethernet (RJ45), HDMI 2.0 output, optical S/PDIF and the power jack.

You could also watch the unboxing video below.

On the back of the case, we’ll notice the device can be wall-mounted, and I’ve marked the location of the two screws you need to loosen in order to open the case. 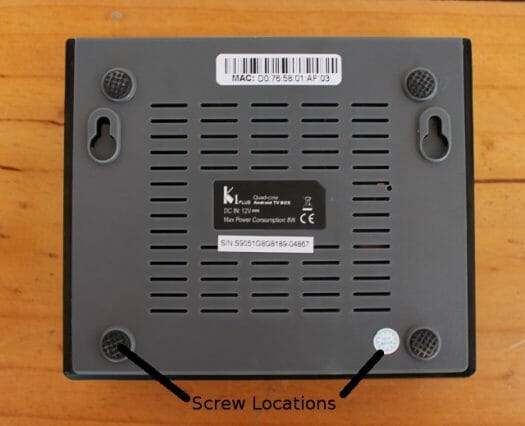 The MAC address suffix D0:76:58 show on the sticker does not appear to look up to anything.

Once you have removed the screws, it’s relatively easy to pop up the top part of the case with a sharp and strong plastic tool. 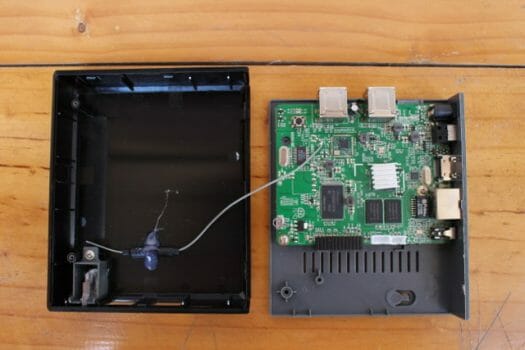 We’ll need to loosen two more screws to completely take out the board. 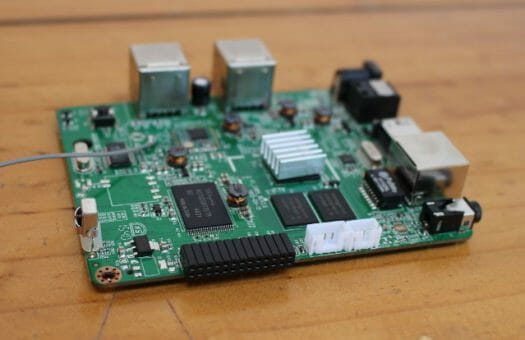 The board name is K1_S905_REV2.0. Three connectors are soldered in the side of the board. The 26-pin black header is most likely for digital tuners, and the two other 3-pin and 4-pin headers have Tx & Rx markings on the back of the board, so one of them is likely to be used for the serial console.

The recovery / firmware update button (K1) can also be seen on the back of the board.

I’d like to thanks Videostrong for sending a sample. If you are interested in purchasing the board in quantities, you may want to contact the company via their Alibaba product page. K1 Plus, also named Ki Plus on some websites, is available on retail sites starting at just $42.99 shipped on GearBest, GeekBuying, eBay, Amazon US, Aliexpress and others.

I wonder if an ATSC tuner will make it to this one. Thanks for the peek in to this S905 box.

What’s the button to the left of the USB port?
Thanks!

What does SW5 button do?

@Gabe
Ah OK… I think I misunderstood vickycq comment now.
SW5 is the power button. It’s controlled by the power LED/button on the top of the device.
If you watch the video, you can see I press it.

@Jean-Luc Aufranc (CNXSoft)
Oh, I see that. Thanks!

@Jean-Luc Aufranc (CNXSoft)
please to test very high biterate HEVC videos like 60 Mbps+ and to include KODI 16 beta 1 in the tests, I think it will be a very good device, looking forward for the DVB S2 version as well

The case design kinda reminds me of the wetek play / core. Very interested in checking one of these S905 boxes out myself hopefully the 912s wont be too far behind either.

the unboxing video needs VPN if I want to watch from mainland China..

@WeK05
That’s what they wrote on the package, but I don’t think they support it by default.

Most apps can’t be installed via Google Play Store with the message “your device isn’t compatible with this version”.
The only thing that I installed was DRM Info: no Widewine, no Playready support at all.

I’ve decided to postpone K1 Plus review until they provide a new firmware that fixes the Google Play issue.

I don’t know whether it’s an old news, but there is a linux kernel on amlogic web page that seems quite recent (arm-src-kernel-2015-11-04-9e845bea41.tar.gz) that has meson64_defconfig under arch/arm64/configs. I wonder whether it’s the config for S905…

Just got my K1 Plus S905 in the mail today, this is my first android TV, where should I go to update, new apps and the latest news about this kind of stuff?

@Zubin
Since K1 Plus does not have OTA firmware update install, you can try: http://www.cnx-software.com/2015/11/24/how-to-upgrade-firmware-on-amlogic-s905-tv-boxes/

You may already have that version of the firmware, or even more recent. So check before getting an update.

Manufacturers of K1 Plus did not setup a support form or anything like that, so your best bet would probably to check Freaktab forums.

Is this still the latest firmware for the KI Plus dvbs2 box?

@Jean-Luc Aufranc (CNXSoft)
when we can expect the review, looking forward to it 🙂

@Jean-Luc Aufranc (CNXSoft)
sorry, not this one, I’m mistaken, I meant the combo version with DVB tuners http://www.cnx-software.com/2016/01/08/specs-unboxing-and-teardown-of-ki-plus-android-tv-box-with-dvb-t2s2-combo-tuner/

@natsu
You could use sysfs to control the GPIOs.

How do you program the k1 plus to receive directv ??

just bought a K1 Plus and also have problems receiving direct tv.

Found some instructuions here but they didn’t work for me. 🙁

I am able to get a signal strength of 80-90% but 0% quality despite choosing the correct country setting.
Are there other settings reqiuired?
Any advice would be appreciated.

@zero
Do you get a list of channels once the search is finished? I guess you set the right satellite?

Hi all
finally i got this box
i’m using it with Samsung TV, the problem is with screen resolution,i changed it to be 1080/50p because of all Europe Channels use 50hz
original app DTV not so smooth in 1080/60p specially in HD and 4k,i think there is frames drop
the problem when i plug off box from mains , android return to 1080/60p , how can i solve this big problem