Allwinner A33 has never been a popular processor for development boards and single board computers, despite its $5 price tag for a quad core processor (in 2014), as without HDMI support, it’s been mostly used in low cost Android tablets. But this morning, I’ve come across Sinlinx company on linux-sunxi mailing list, and one of their latest development board – Sinlinx SIN-A33 Plus – is based on their older Allwinner A33 and features LCD, VGA & camera interfaces, I/Os headers, Ethernet and WiFi/Bt connectivity, and various other ports. 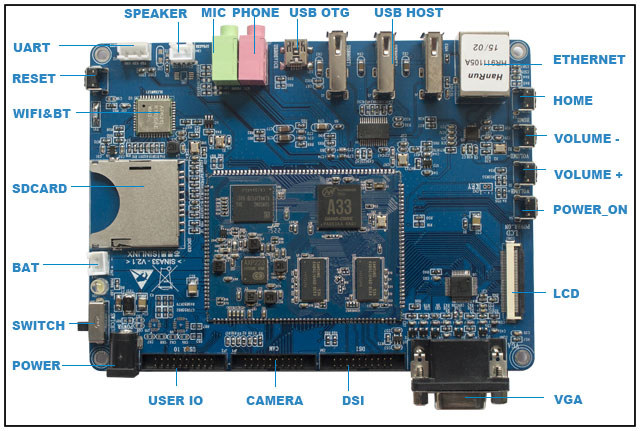 There’s actually very little information about SIN-A33 Plus, but there are more details about its smaller predecessor that lacks VGA, Ethernet and wireless connectivity, and a few other features. The company provided me a link to the SDK (password: xfux) with Android 4.4 and Linux 3.4 + Qt 4.8.7, as well as documentation (mostly in Chinese).

SIN-A33 board also have its own page on linux-sunxi community, and while there isn’t any support for Allwinner A33 on the legacy kernel (3.4), there’s some support in mainline U-boot and Linux with sun8i-a33-sina33.dtb device tree binary. This is all for the older board, so modifications would be needed for the new features of SIN-A33 Plus board.

The new board is available on Taobao for 349.00 CNY (~$54). More details may soon be found on Sinlinx website, and if you can read and write Chinese, you may ask question on their forums.

are they still producing those socs or is this an attempt at getting rid of old stocks ?

Another way of asking that question would be, are there end of life announcements for those arm chips (any brand) ?

@mdel
Allwinner does not publicly announced EOL for their processor, but Olimex had a look into this, and Allwinner said their processors are typically available for 3 to 4 years.
https://olimex.wordpress.com/2013/08/20/how-long-olinuxino-boards-with-allwinner-socs-will-be-available-ii/

In a later update, Olimex said if you can order 50k pieces or more, Allwinner will do a run for you, even if the processor is phased out.
https://olimex.wordpress.com/2014/11/27/how-long-olinuxino-with-allwinner-socs-will-be-produced-again-now-we-know-the-answer-forever/

Hi my name is Alp,
I want to ask can you share the sdk link again? This link expired. Thanks