Rockchip first unveiled RK3399 hexa-core processor at the beginning of 2016, but we had to wait longer than expected to get devices to play with. The first retail product based on the processor is really Samsung Chromebook Plus, and we only saw a few TV boxes for pre-sale in January such as Yundoo Y8 or R-TV Box K99, and with the first shipments occurring in March. However, I’ve also noticed many companies postponed the launch of the RK3399 mini PC/TV box, and no company contacted me for review so far, so I had no rush because that probably means the boxes were not quite ready. But starting at the beginning of next month, more companies will start selling their model, and GearBest proposed to send me Yundoo Y8 model with 4GB RAm, 32GB flash, and decided to give it a go. In this first part of the review, I’ll only look at the hardware, and will further test overall performance, video & audio capabilities, in subsequent posts. 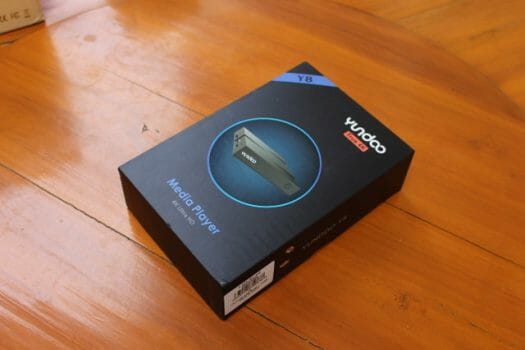 There are two version for Y8 model one with 2GB RAM, 16GB storage, and the other with 4GB RAM/32GB storage which I received,

The box ships with a HDMI cable, an infrared remote control with IR learning function for 5 keys, a 5V/2.5A power supply, and a rather useless user manual. 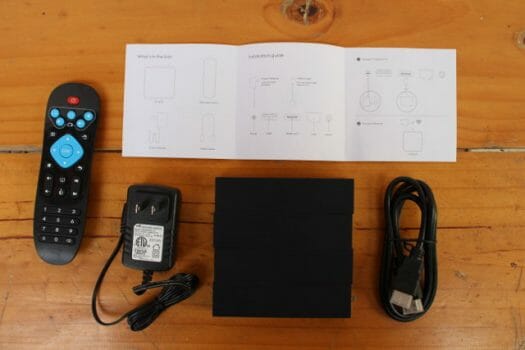 The enclosure is made of plastic with the power button on the front panel, an SD card, USB 3.0 port, and USB type C port on one of the side, with the rest of the ports on the rear panel: DC jack, optical S/PDIF, AV port (composite + stereo audio), Gigabit Ethernet, HDMI 2.0, and two USB 2.0 ports.

You may watch the unboxing video if you please.

We’ll start our unboxing by removing 3 rubber pads from the bottom of the case, and loosen the three screws underneath. You can leave the one at the top left alone, since there’s nothing there.

The gap between the two side of the enclosure is extremely small, and my green plastic tool was not sharp enough, so I took a bit more risks and used a sharper metal tool to get started with popping up the bottom part of the case, before carrying on with the plastic tool.

There’s no much to see on the bottom of the board, except a footprint for a wireless module with one antenna, and the sticker showing the key features of the board: RK3399, 4G/32G, and AP6356 wireless module. After removing four more screws, we can completely take the board out.

A large heatsink covers the processor and RAM chips, and it’s further cooled by a thermal pad and a thick metal plate attached to the box of the case. Two antennas are connected to the Wireless module, which could help with WiFi reliability and/or performance. The power button and LED is located in a separate small board. 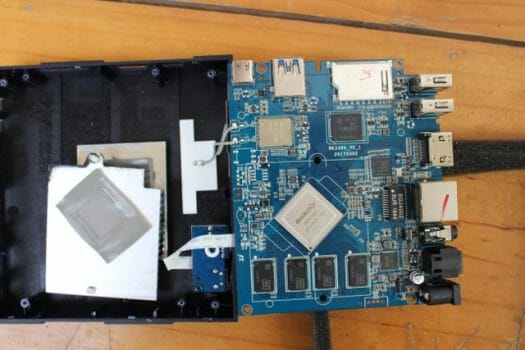 I’ve removed the heatsink to have a better look at the board, Note that there’s no thermal paste between the heatsink and the processor, but instead the company used another thermal pad.

Rockchip RK3399 processor is connected to four Samsung K4B8G1646D-MYK0 DDR3L chip (4x 1GByte), and a 32GB Samsung KLMBG4WEBD-B031 eMMC 5.0 flash with theoretical 260/46 MB/s sequential read and write speed, and 6000/5000 R/W IOPS, which should offer a good user experience. That’s still the lowest end 32GB Samsung eMMC flash there is. Ampak AP6356S module brings dual band 802.11 b/g/n/ac 2×2 (Up to 867 Mbps) and Bluetooth 4.1 LE connectivity to the board, while Gigabit Ethernet is made possible thanks to ZTE ZX2AA500 transceiver – no a Realtek chip for once – and SG24002 magnetics. Rockchip RK808-D PMIC completes the list of the mains chips on the board. You may have also noticed the unpopulated 4-pin header  on the bottom right of the board which should be the serial console. The firmware recovery button is hidden right behind the AV port.

I’d like to thank GearBest for sending a sample for review. If you are interested you could purchase the device on their website for $109.99 with coupon GBYDY8, or $90 with coupon GBYDY816 for the 2GB/16GB version. Yundoo Y8 appears to be a GearBest exclusivity, as I failed to find it on Aliexpress, GeekBuying and other websites.

oooh Gigabit AND usb3. I wonder whats the USB3 benchmarks will be like and how difficult it will be to put vanilla linux inside of it and maybe use it as a NAS.

Tested with firefly RK3399 and USB3 SSD
Read speed around 400MB/s with UAS enabled, 250MB/s without.

Give me Linux mainline support and this is my box.

No mention anywhere of which OS installed – hopefully Android7 and Linux mainline ?

Are the antenna leads soldered to the board ?

When you do the part 2 of the review, pls measure power consumption for idle & internet browsing. Please also measure the WiFi range

Ugoos has also come out with the UT5 based on the RK3399, but it’s quite expensive right now:

@Hugh Mayle
If my memory serves me right, that website often lists Ugoos boxes very early, and at an inflated price as long as it’s not available. Price will come down in a price line with other products at launch, although slightly higher since Ugoos is doing a decent job with their firmware, at least over time.

@Hugh Mayle
That’s not the real price as it’s not for sale yet.

The Yundoo Y8 has serious Google Play Store problems, half of apps say not compatible. There are also big pass-through problems as you get no audio output, just silence. Just get green screen problems when using Sony or Phillips tv’s. When using Chrome browser the above tabs overlap and you can’t use it. The ethernet MAC address also resets to random after every reboot. No Google Widevine for streaming apps. Youtube stuttering problems because of slow EMMC. Kodi can’t play VP9 or Mpeg videos. Also no update for Android 7 will be released while other RK3399 manufacturers will release it… Read more »

@ivan
The chips are very decent and high performing.
But it’s the first to market manufacturers that combine low quality hardware to save costs with unstable pre-release firmwares full of bugs, no testing before a device is shipped and no after-sales support that give the chips a bad name.
When manufacturers that will release Android 7 and use higher quality components including a fan(since the CPU runs hot) release their devices with good after-sales support and regular firmware updates, their RK3399 devices will run much better.

Even if the cooling design looks worse than anything we’ve ever seen yet, it features a rich connectivity and I think it’s the first affordable A72-equipped device. I’d be tempted to buy one just to see if I can boot Linux on it, but I want to ensure I’m not wasting my money. @cnx-software, for part2 of your review, if you have some grip-pins to attach a TTL UART adapter to the connector at the bottom right to show the boot loader and the output of “help” and “printenv” (to ensure it’s not locked), it would be great.

@Willy
Cortex A72 based Xiaomi Mi Box 3 Enhanced has been available since last year for about $80 -> http://www.cnx-software.com/2016/04/18/xiaomi-mi-box-3-enhanced-review/
However, we did not see any UART at the time, and for people who planned to use it with Android, not ideal since it was for the Chinese market.

Those RK3399 boxes should be much easier to work with.

cnxsoft : @Willy Cortex A72 based Xiaomi Mi Box 3 Enhanced has been available since last year for about $80 Yes but with no network connectivity, that doesn’t count for me, I call these a brick 🙂 I also noticed that apparently the RK3399 are really running at 1.5 and not 2.0 GHz, I’ve seen various performance reports on the net showing some Firefly boxes and even a presentation of the Yundoo Y8 where the CPU was shown at 1.516 GHz. Not a bit deal but we know we must never trust these vendors when it comes to GHz, so… Read more »

Anyone been able to run Linux on this? If it can run Linux they have a customer for at least 2 boxes.

Also it seems the USB-C support dual screen. If this can support dual 1900×1200 in Linux, it would rock.
But yeah…too much to hope for maybe?

They probably are all using the same reference board so just load whatever on it, once you verify if that is the case. In particular the open nature of the Firefly should make updating the Yundoo Y8 relatively easy regardless of what Yundoo itself does.

did you find an exposed clk pin of the emmc ?