So it looks like Rockchip is soon going to join 96Boards family with Rock960 board. Developed by a Guangzhou based startup called Varms, the board will be powered by Rockchip RK3399 hexa-core SoC, and comply with 96Boards CE specifications. 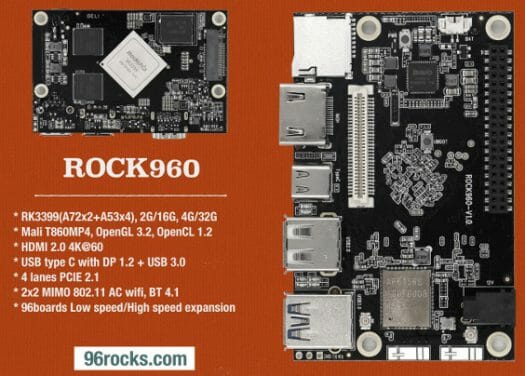 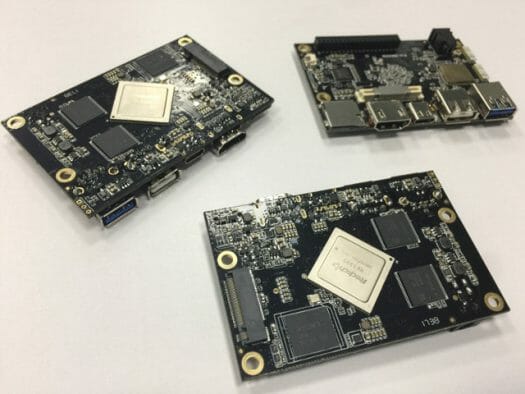 The board will support Android (AOSP), Ubuntu, the Yocto Project, and Armbian. The website shows the word “official” for the first three, and lists Canonical as partner. The company will also offer various at least one expansion board, and starter kit based on Seeed Studio Grove system with a mezzanine board with plenty of Grove headers, an LCD display, and various Grove modules like buzzers, relays, buttons, LEDs, temperature sensors, and so on. 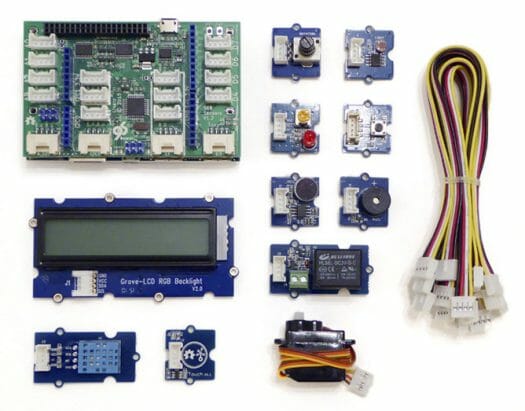 Rock960 is both simpler and smaller than other RK3399 boards such as Firefly-RK3399 and VS-RK3399, so I’d expect it to be cheaper, hopefully below $100, once it becomes available. The website is still very much under construction, but you may find few more details there.

Thanks to mininodes for the tip.

What’s with the bottom-side SoC placement? How is heat dissipation supposed to work?

@blu
With a huge metal enclosure acting as a giant heatsink, look at ODROID HC1 to get the idea 🙂

@tkaiser
I see. I hope the vendor provides that in the box, otherwise it would be rather impractical.

@blu Well attaching any huge metal works surprisingly well. Tested personally with a Banana Pro and a NanoPi NEO both combined with el cheapo thermal pads in aluminium enclosures and got ~10°C less on average. At a customer they use now the same thermal pads to attach NanoPi NEO directly to the top of each rack cabinet though with all those slow SoCs it’s not really needed anyway. With such powerful SoCs like RK3399 I believe the only reasonable placement on any PCB is like it’s done here since this is the only chance to get good but fanless heat… Read more »

nobe : does “M.2 key M” means only SATA is available ? Exactly the opposite. M key allows for ‘PCIe ×4, SATA and SMBus’ and since RK3399 has neither SATA nor SMBus… If the company is smart they use a thick metal base plate both providing heat dissipation and mount options for 2242, 2260 and 2280 M.2 cards though AFAIK the only cards that would really fit here are M.2 PCIe SSDs and they’re all 2280 today. But maybe they provide another such baseplate with a real PCIe 2.1 x4 slot… BTW: wrt SSDs you have to take care again… Read more »

@m][sko
The Kirin has almost everything integrated (at least DRAM) and can AFAIK only handle one display (?). If you look at RK3399’s bottom there are ~900 solder balls so even with a die shrink I doubt they can shrink the package that much 🙂

This might become a very popular 96board (depends on price). IIRC rk3399 should have upstream support. It’s the same chip as in Samsung Chromebook Plus and ASUS Chromebook Flip C101.

@davidlt Yes, RK3399 (as well as RK3328) are amongst the Rockchip ‘open sourced’ SoCs. With both SoCs some stuff surprisingly is fixed/supported by Rockchip themselves already in their upstream mainline kernel submissions and will only later be backported to their respective ‘vendor kernel’ (4.4 BSP for Linux and AFAIK 3.10 for Android). A bit sad the 96board specification didn’t take care of RGMII since these SoCs also show nice Gigabit Ethernet performance 🙂 But hey, the use case shown above (tons of boring low speed accessories attached) can be done with this board showing zero CPU utilization all the time… Read more »

@tkaiser
This is probably due to Google Chromebook (minimum 5 year support). Btw, 4.4 will be the first 6-year LTS. Google announced that kernel community will be doing 6-year extended LTS (not specific to Google Android or Chromebook, but will help them __a lot__).

davidlt : 4.4 will be the first 6-year LTS. That’s really interesting especially given that all the RK stuff is developed in the open. Lets wait and see. I would assume once the price tag of the board above is known Xunlong will officially announce their own RK3399 for $5 less 😉 At least based on the PCB pictures that were ‘leaked’ back in April the ‘RK3399 Orange’ will be ready for a lot more use case out of the box (Gigabit Ethernet exposed, tons of connectors, one SATA port provided by an ASM106x, a mPCIe slot to be combined… Read more »

@tkaiser
This is all very good, but how about active cooling? After using the A8040 for sufficiently long I have my doubts about 2x A72 + MP4 @28nm running throttle-free at their respective full clocks with passive cooling. We shall see, I guess.

@nobe
It appears that a Mezzanine board is in the works for GigE plus POE. https://www.96boards.org/product/ethernetcard/

Thanks for all the suggestion.

M.2 is just the connector in a small footprint with many pins available. We have routed the RGMII and 4 lanes PCIE on the connector. The initial intent was not to use PCIE SSD(you can not reach the max speed of the SSD anyway). We are planning to release a custom pcie adapter board with GbE and 4 SATA(pci to sata).

I just posted a video of it here https://www.youtube.com/watch?v=j_6ZUAc3P5E

@vamrs
Just to double check, you mean 4 x SATA connectors? I.e. I could use this board for NAS with RAID?

@Ray Knight That’s USB2 Ethernet, not even half of the bandwidth compared to what RK3399 provides natively (RGMII) @vamrs Nice to hear that RGMII is also routed to the M.2 connector (violating specs somewhat?) @davidlt Even with just a single PCIe 2.x lane you can always add a Marvell 88SE9215 for example and get 4 ‘native’ SATA ports. Since it’s Marvell you can add on each port a good Marvell SATA port multiplier and then have 20 SATA drives already. And all of this is just mad since expensive, slow and not taking care of data integrity. 🙂 (I deal… Read more »

@Jean-Luc Aufranc (CNXSoft)
i guess he refers to the ARM Compute Library, i think it’s not only for Mali-T860MP4 GPU but for all midgard & bifrost mali GPUs

@vamrs
i agree with tkaiser, a metal enclosure acting as a fanless heatsink is a must have IMHO.
i also like his idea of a case big enough and having screw holes to fasten your planned pcie adapter board.

@Ray Knight In my opinion it’s too late. The 96boards specification is pure crap apparently designed to kill ethernet usage. And it works 🙁 It’s sad they did this at the moment ARM chips are starting to enter the server market. Some will say that there’s the (much larger) 96board enterprise format. But clearly the NAS form factor is what helps transitionning from the development board to the server board and they’re making it the hardest possible. Adding extra parts is a no-go for most use cases (form factor, moving parts, pricing, etc). For now every time I see a… Read more »

For those looking for NAS usage with that “4 ports PCIe SATA adapter”, this would add to the price so it’s IMO, better to go for HP Microserver G1610 which here in Europe costs ~ €200. Then you can even run ZFS (ZoL) using ECC RAM!

@fossxplorer
I’m looking for non-x86 NAS stuff. And maybe a light non-x86 desktop. But nothing out there seems really appropriate. Or at least not at a halfway reasonable price.

Four months on. Will this board still materialise ?

I have just received an email:

we are happy to announce that ROCK960, the first 96boards based on Rockchip RK3399 is finally available now. ROCK960 was first introduced in Linaro Connect 2017 SFO(working sample), and it’s almost one year from now. We didn’t expect it takes that long to get the board to massive production. The hardware has been updated/optimized for 4 times, from version v1.0 to now MP v1.3, we made samples then test and verify for each version. It finally gets to the stage we are satisfied and ready to ship now.

@Robert
For some reasons (maybe work on software support), 96Boards always seem to take forever to launch.
For example, Dragonboard 820c was unveiled in February of last year, as it has yet to launch, but we’re being told it should be available very soon.

@Jean-Luc Aufranc (CNXSoft)
OK, I didn’t realise that. I hope that it is available soon because I’ve been holding out. I need a new board by mid February. The 4GB/32GB version.
Do you happen to know if a USB to UART module board (based on CP2104) will be made available, for console debugging from a terminal ?

@Robert @Jean-Luc Aufranc (CNXSoft)
I already have the answer to my question. A colleague pointed me 2 boards at the 96boards website which add this functionality to any board in the 96boards lineup. The “UART Serial Mezzanine” and “Arrow Audio Mezzanine”.

I know of one other premium arm board that is waiting on busy programmers, but I suggest working software, is better than the Orange Pi build, make and forget model of product launch.