You may remember we covered a “4K ATV Stick” last month, as a mostly unknown manufacturer (Shenzhen SEI Robotics) applied for FCC certification, with the device featuring a large G marking, leading some to speculate it may be an upcoming Google device.

At the time, I dismissed it, and believed if was just another Chinese “Android TV” or “Android” TV device, but Google has now released a similar looking Android device which probably means I was wrong… 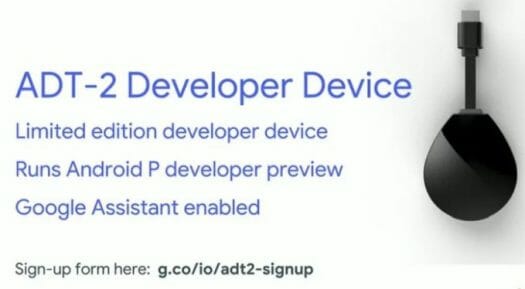 The dongle will come with a voice remote control and a power supply, and receive updates from Google.

ADT-2 HDMI dongle is a limited edition Android TV box that is intended for developers, and you can apply for one with priority going to developers with Google Play accounts.

Same specs as Mi Box. I wish we could get Android P on Mi Box too.

Don’t hold your breath. I read a American article where xiaomi said they planed no update soon. Most of their work is on their China specific OS.

Nobody Of Import
Johny007

Heh… I’d be more happy getting a Libre Computers’ Le Potato or similar booting Android TV. Should be able to do something like that… You’ll get more attention if we take the reins ourselves and do it ourselves.

I saw this dongle on Ali Express a couple weeks ago…

On the S905** Android Boxes: Is it true that total bandwidth limit would be 240 Mbps each way because the fast ethernet port goes through the USB2 hub internally?

Most Android Box designs internally seem to have one USB2 OTG port(s.) How can the master slave modes be switched under Linux Armbian or Android OS?

Weird that it doesn’t use the soon-to-be-released S905X2.