LoRa gateways tend to be fairly expensive, especially because of the radio part, but anything that may help lower the cost is probably welcomed.

And one way to to do that is to use dirt cheap boards like Orange Pi Zero as Edzelf did, by combining the low cost Arm Linux board ($15 shipped) with Rak wireless RAK831 concentrator module kit ($143) via a custom cable, and a power supply board. All assembled into a metal case.

RAK831 communicates with Orange Pi Zero over an SPI connection. While some other Orange Pi boards are suitable for the project, note that Orange Pi Zero Plus lacks a spare SPI interface, and can’t be used with this particular application. A fan was also added for cooling, a well as a USB serial debug board for debugging purpose, but it can be removed once the gateway is in the field.

Software-wise, Edzelf installed Armbian 5.38 on the board, and setup the timezone and WiFi, as well as enabled SPI and GPIO interfaces with armbian-config. The next step was to install the gateway software “iC880a gateways running The Things Network” since the plan was to run the platform as a gateway on The Thing Networks (TTN). You’ll then have to configure the gateway and modify some scripts to reset RAK831 board with GPIO 25. 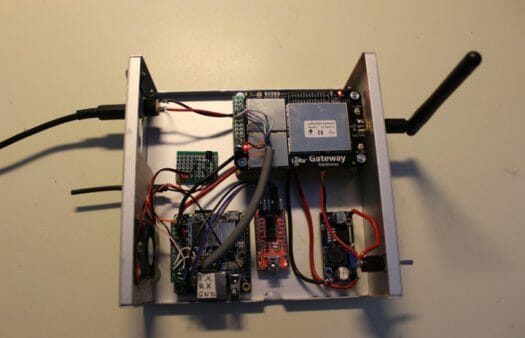 Everything to build your own Orange Pi Zero LoRa gateway is explained in further details in a PDF hosted on Github. The PDF was exported as a JPEG, so if you want o reproduce his setup, you’d have to type the commands manually since copy/paste is not possible.