We first tested MediaTek MT7688 MIPS processor in Mediatek Labs’ LinkIt Smart 7688 / 7688 Duo hardware development kits running OpenWrt in 2015 with the boards having a focus on IoT applications. A year later, Widora NEO board launched with an audio jack for connected audio applications, but AFAIK it’s not available anymore.

There’s now another OpenWrt audio board based on the processor with HLK-7688A board featuring Hi-Link HLK-7688A module which we previously found in MatchBox LoRaWAN gateway. 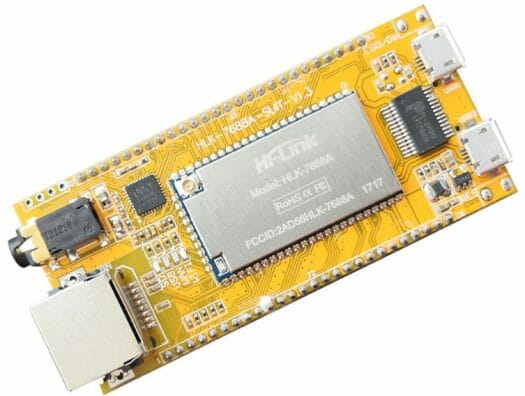 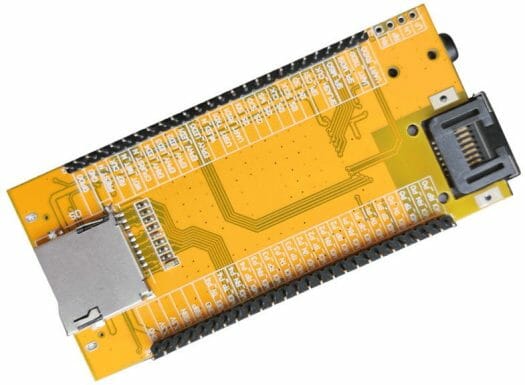 The board is apparently sold as a video and/or audio streamer storing files in USB storage or MicroSD card to be played on your phone. Up to 8 phones are supported for photo sharing, and 3 phones for simultaneous video streaming.

One buyer also mentions USB audio works just fine with Linkit firmware, and the latest version of OpenWrt can run on the board but without I2S nor I2C support. He later updated his comment with further details:

Openwrt driver support is left at v15 and even this version 15 is full of bugs. I2S is “mission impossible” andI could not get sound out of that board

If despite the software shortcomings, you’re still interested in the board, it can be purchased for $16.70 with WiFi antenna on Aliexpress, or alternatively you could get the module only for $10 shipped from the same link.

As a side note, while looking for other HLK-7688A boards on Aliexpress, I came across one with 5 Ethernet ports since the processor supports this. 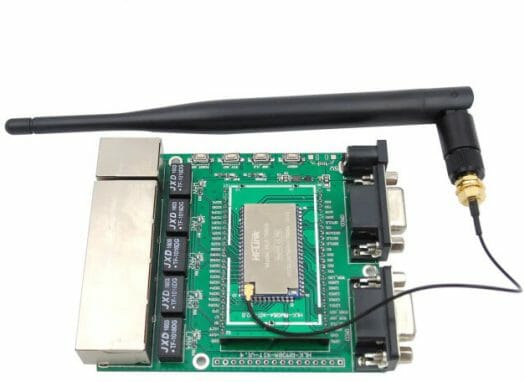 The router board above can be purchased for $17.55 including shipping.

Thanks to Fran for the tip

You mixed RAM and flash sizes, it seemed odd to me 🙂 Coincidently, last week-end I was looking at a number of boards using this module and noticed that all of them are very large, almost voiding the benefit of this compact module. Apparently you found an interesting one! The module alone can be found even cheaper on aliexpress, around $8/pc or so. However from what I’ve understood it only takes 3.3V input so you’ll need an external regulator anyway, making this board interesting since for a small extra price and not that much extra square centimeters you get quite… Read more »

>For example it’s appropriately sized to make an MQTT gateway for IoT devices.

Same sized module based on something like the AW S3 would be better IMHO.

Likely indeed. However having a full machine (soc+RAM+flash) at such a price with decent specs is already great.

is that board 5x Gigabit?

Based on the datasheet info, the processor only supports Fast Ethernet.

Yep that’s 100M only. Some such chips’ datasheets used to be confusing because they used to report gigabit for the ethernet controller, but in fact the internal GbE ethernet controller is connected to the internal 5x100M switch, which is what causes the confusion. Also when you look at the HLK-7688A module’s pinout, you have 2 Tx and 2 Tx pins per port so it’s definitely 100M. The MT7621 I’m having in my EdgeRouter-X has 5 GigE ports and is a dual-core quad-thread at 880 MHz. I don’t know if similar modules can be found but the whole assembled device looking… Read more »

Having a sound output is not a big deal. As long as you have a USB port on your OpenWRT router, you can attach a $5 USB sound card that has audio jack output and install USB Audio Support. Some Linksys routers can be “modded” to use GPIO headers to get an additional sound output, with a simple cable and two connectors (a header connector + 3.5mm jack output). What’s good about this board is that it’s so cheap. 🙂

Actually there was a i2c driver that was working, there was patches created for LEDE but they never get merged.

Unfortunately that soc have a silicon bug for i2c and a manual register handler was created. With that driver the chips works quite well.

Unfortunately I2S is broken. I have tried a lot of times. I think it is related to the DMA driver.