When Shenzhen Xunlong Software launched their first Allwinner H6 development board, Orange Pi One Plus, many were disappointed as the board did not make use of some of the key features of H6 processor like USB 3.0 or PCIe, and RAM was limited to 1GB. A couple of weeks later, the company introduced Orange Pi Lite2 board with 802.11ac WiFi, a USB 3.0 port, HDMI 2.0a output, but no Gigabit Ethernet, nor PCIe interface, and again only 1 GB LPDDR3 memory.

There are four variants of the Orange Pi 3 board with either 1 or 2 GB RAM, with or without eMMC flash that share the following specifications: 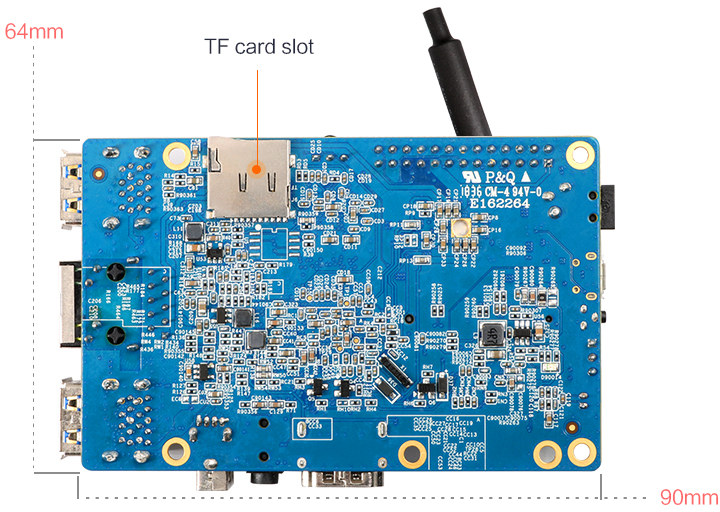 The hardware looks good and leverages most features of Allwinner H6 processor, but if you ever plan to use PCIe, be aware that they are issues as explained in linux-sunxi:

Allwinner H6 has a quirky PCIe controller that doesn’t map the PCIe address space properly (only 64k accessible at one time) to CPU, and accessing the PCIe config space, I/O space or memory space will need to be wrapped. As Linux doesn’t wrap PCIe memory space access, it’s not possible to do a proper PCIe controller driver for H6. The BSP kernel modifies the driver to wrap the access, so it’s also not generic, and only devices with modified driver will work.

The company will release Android 7.0, Ubuntu, and Debian images for the board, which should eventually become available in the download page. Also note that Armbian provides experimental Ubuntu Bionic and Debian Stretch images for Allwinner H6 boards based on Linux 4.19.x, so Orange Pi 3 will likely be added to the list soon.

Pricing for the four variants of Orange Pi 3 board:

You’ll find all four on Aliexpress as usual.