In my first job, I wrote code for a MIPS processor for VoIP phones, then I switched to NEC/Renesas MCUs for CD and DVD players, before going back to Linux and my first experience with an Arm processor: Cirrus Logic EP9307 with a single ARM9  (ARM920T) core clocked at 200 MHz. That was in 2005, and according to Wikipedia various ARM9 cores were released between 1998 to 2006, and now such cores are not recommended for new IC designs with most companies now building their chips around Arm Cortex-A/M/R cores.

At the end of last year, we wrote about Banana Pi BPI-F2S SBC based on Sunplus SP7021 “Plus1” quad-core Cortex-A7 processor with ARM9 and 8051 co-processor. Odd enough but at least the ARM9 core is not the main processor, however, while looking at the upcoming Linux 5.6 Linux kernel log I read an entry about a new SAM9X60 ARM926-based SoC from Microchip. 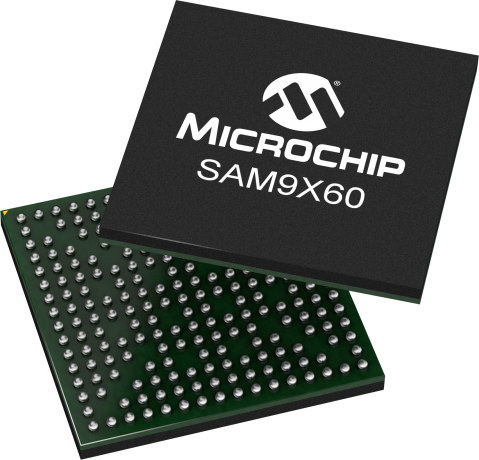 Quite surprising to have a new ARM9 processor right now, but it should be considered more like an upgrade than a completely new design as explained on Semimedia that first reported about the processor in October 2019:

The SAM9X60 reduces the core operating voltage from 1.8V to 1.2V, and upgrades the SDRAM interface to a (LP)DDR2 interface…

It’s worth noting SAM9X60 is an industrial-grade processor with a temperature range of -40 to 105°C.

Since there haven’t been any other new ARM9 SoC that I know of in recent times, 600Mhz must be a CPU clock record for ARM9 architecture. The system and memory bus are still clocked at 200MHz. The processor should also be more efficient thanks to a lower core operating voltage, and LPDDR2 memory interface. I suppose Microchip introduced this processor for existing customers that may want to upgrade products with improved performance and features while reusing most of the code.

You’ll find the full specifications, datasheet, and documentation for the processor on the product page. Volume pricing starts at $4.34 for 5,000 pieces.

The company also launched an evaluation kit with the following key features and specifications:

There’s excellent hardware and software documentation for the board on Linux4SAM Wiki with source code and demo image for Yocto & Builroot built Linux as well as OpenWrt. The product page also comes with documentation, and the board can be purchased on Microchip online store for $260.

Nuvoton also have a bunch of slower (~300mhz) industrial arm9 chips with memory. They have one in a tqfp 64 from what I remember.

Let’s not forget the Alwinner F1C100S family with integrated DRAM. F1C200S with 128MB of RAM cost less than $2

If you order 5 of the nuvoton parts from their distributor they are $.50 each apparently because a sample price is applied. Which is a good deal for makers especially if you want something your can solder like the QFP packages.

For someone so concerned with the price of things it’s weird you would suggest something that costs almost 10 times as much.

Also on old tech getting used. Several of the high priced multi console retro arcade machines on Aliexpress, have Allwinner H3, or Amlogic S812 SoC running inside. They tend to be fitted with a copper coloured cheap graphics card heatsink and fan too. Some have noted the S812 emulate games better than the S912, as well as comments that the S812 runs cool with the fitted graphics heatsink and fan.

” Mini Street Arcade also know as the pandoras treasure, Its basically a pandora’s box clone with no arcade stick attached it uses usb or wireless controller.
Its supports Sega genesis,FBA,NeoGeo,MAME,CPS1,CPS2,CPs3 and PS1.
Unfortunately, it’s overpriced for what you get and I just can’t recommend it to anyone.
Powered by the Allwinner H3 quad-core CPU with 1GB of ram. Lies about true memory size.
ETA PRIME

Pandoras Box 3d 9 or Pandoras BOX 3d with WIFI. Powered by a quad-core Cortex A9 CPU clocked at 2.0Ghz paired with an 8 Core Mali450MP8 GPU

>How nice that the evaluation kit is available from Mouser UK for £270.93.

I’ve said this here before but the cost of eval kits doesn’t really matter. It’s not meant for consumers to buy. It’s meant to be bought as a business expense.

So why not just use a Samsung Cortex A8 ARM processor running at 1 GHZ. Like ARMWORKS andahammer com.