[Edit: Hardkernel has now updated their documentation to clarify the NAS uses ASM1061 PCIe to SATA controller instead of JMB582]

It’s hard to find low-cost NAS platforms often because of the mechanism to insert drives and the enclosure add to the cost. An alternative is to use boards like Hardkernel ODROID-HC1 for 2.5-inch drives or ODROID-HC2 for 2.5- and 3.5-inch drives, but each board supports only one drive. The designs are stackable, but you’d need one Linux board per drive, so it’s not ideal.

The Korean company has now launched a new model with ODROID-HC4 powered by an Amlogic S905X3 processor and shipping with a case supporting two 2.5-inch or 3.5-inch SATA drives that will start selling later this month for just $65 and up.

The Cortex-A55 cores are pretty efficient, so a somewhat small heatsink (40 x 32 x 10mm) is attached on top of Amlogic S905X3 processor and RAM chips, and it will be good enough for cooling as the company measured a CPU temperature of 60°C under load in a room with an ambient temperature of 30°C. Power consumption is also pretty low at 0.29W in suspend mode, 4W at idle (no drive), and up to 15.6 Watts using hard drives and file transfers over SAMBA. 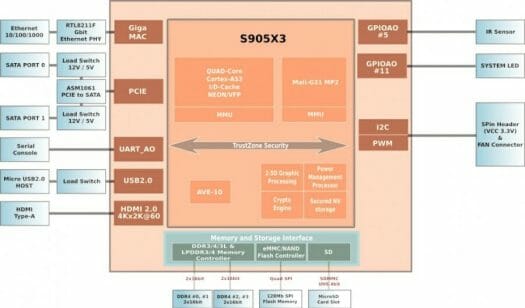 Besides the ability to connect two drives, the company replaced the USB 3.0 to SATA chip used in previous designs with a PCIe to SATA controller that should deliver better performance, especially for smaller files and random I/Os. Hardkernel reports around 400MB/s transfer speed with iozone using SSD’s, and 110MB/s SAMBA transfer speed that the maximal you can expect from a Gigabit Ethernet link.

The company provides an Ubuntu 20.04 image with Linux 4.9.230 (or Linux 5.8+ mainline) for the NAS and third-party images (CoreELEC, OMV and Android) are coming as well. Petitboot will also be supported and capable of booting the OS from MicroSD card or SATA storage. More technical details can be found in the wiki.

ODROID-HC4 will launch on October 27 for $65 with the plastic enclosure, and $75 with the RTC and OLED add-on board. Note you’ll also need a 15V/4A power supply, and the company will also offer optional accessories including an IR remote control, Wi-Fi and Bluetooth adapters, ODROID-VU series display devices, and a USB-UART cable for OS developers.

[Update: Ameridroid is already taking pre-orders, and as usual you can use coupons to get small discounts on any products on Ameridroid:

Thanks to Matt for the tip.

I was just about to email you but figured I would check the site first.

I think this is a good all in one solution for those looking for a media center with attached storage or just as an inexpensive NAS.

It would have been nice to have USB 3 as well but limitations of the SoC prevent it I suppose.

If I remember correctly PCIe and USB 3.0 interfaces are multiplexed in the chip, and since they used a PCIe to SATA controller, USB 3.0 is not available.

BTW: In the meantime all occurrences of JMB582 have been replaced by the much older ASM1061 on the Hardkernel site.

Shouldn’t make a difference since while JMB582 is capable of Gen3 speeds the SoC isn’t so it’s a Gen2 x1 PCIe link anyway.

With 4W at idle (not counting in the disks itself) there is maybe some room for improvements on the software side (Active-state power management)?

And I would be a bit concerned about vibrations when using HC4 with large spinning rust. The platters rotate above the center of gravity.

> And I would be a bit concerned about vibrations…

Vertical mounting, no active airflow, no vibration resistant mounts and two HDDs vibrating each other at 120Hz… What could possibly go wrong? 😀

I’m definitely throwing this plastic case away once I get my hands on this thing. Even thinking of using SATA cables.

The case design is basically the same as cheap dual-drive docking stations like the inateck FD2002. Do people have vibration problems with those? fwiw, I use one in my budget NVR setup and it’s been fine so far. I’ll knock on wood…

I use one as well and haven’t had any issues, I just so happen to use that exact Inateck.

I couldn’t believe how fast it could clone a drive without a PC connected the first time I used the feature.

agreed, astronomically high idle. either no PM active, or very badly designed NAS. I would expect <1Watt in this scenario on idle.

Generally amlogic ARM have much less power consumption in idle state than e.g. raspberry pi 4B due to different combinantion of A5x/A7x cores. Raspberry Pi 4B with 4xA72 have 2W idle, so amlogic with 4xA55 have a potencial to 1W at idle. Better would be using 4xA57 cores.

Looks good, we can already start designing other cases. If they only had put that IR sensor on headers, then the IR sensor could easily moved to another place in custom cases.
What is the PCB mounted on the right side of the case, it isn’t there on the pictures in the wiki.

Are you referring to the 40mm fan?

Not a fan of fans.

Yes, the case is not what I would like to use. It seems they are not selling the board without it, so you will end up paying for it anyway and trashing it…

Let’s hope they provide just PCB and heatsink for a few bucks less. But it’s more about not having to throw useless stuff away than saving some money.

,,,and that case is…heh…a waste of resources. They’d been better served by trying to make something like the HC1/HC2 except with two bays or an optional add-on rail that docks into the first. The board itself isn’t rinky-dink, but the case makes it moreso.

It is a shame they didn’t make a regular case, i want the harddrives to be protected in a metal case not poking out of a plastic case. I wonder if this would be powerful enough to run FreeNAS?

It could most likely run OMV, but FreeNAS doesn’t support ARM based SoCs, so that’s never going to happen.

OMV itself is no slouch. As for FreeNAS. It’s all FOSS and there’s a port of FreeBSD available for ARM targets… You should be able to do it if you had time… ;-D

interesting they have not gone with S905X4.

Because it’s not available just yet.

It’s based on the C4, had they used the X4 it would have costed more and been delayed until SoC availability.

Wait a minute. So, I can buy this thing. And then I can download files to it from my MacBook, and then watch movies from there on my TV through HDMI? Am I right?

Correct. It can do both network storage and act as a media player.
Amlogic S905X3 is actually a TV box processor.

The best firmware for video playback is probably CoreELEC, and then I’m not sure how easy it is to configure NAS functions using that OS.

Ubuntu 20.04 will be more versatile with both video and network storage features supported, but some video playback features like HDMI audio pass-through, HDR may not be fully supported, while it should work well in CoreELEC.

There is probably a mistake somewhere.

The mistake is in the block diagram. I did not notice it until your comment. I took it from the Wiki.

That’s pretty close to what I was expecting from a backup server. I could directly plug SATA SSDs for off-site backups instead of having to deal with usb enclosures. I’d need to stabilize the second one so that it doesn’t risk accidental removal however.

Documentation mentions 7-pin GPIO (for optional OLED display), but pictures show only 5-pins. And why do they they again not include the eMMC socket (same issue I had with HC1 and HC2).

It can boot from directly from disk, no need for the eMMC really but it would have been nice to have the option.

I did build my own NAS with rasspberry pi 2 and some ali express 2 drives to USB device. I probably will not buy this, because not much of a speed gain…

Oof that single USB host port shared with the network adapter and 100Mbit ethernet connection. Pile on the lack of hardware AES and the 10x speed gain you’d get from a gigabit network link is just the tip of the iceberg.

I like it. Great to have HDMI on it.
It’s a good SoC, great thermals and low power consumption. Too bad there’s no USB3 left. But you’ve got to compromise with Amlogic SoCs.