QNAP QMiroPlus-201W is an unusual networked storage device that’s acting both as a 2.5GbE & WiFI 6 router and NAS combining Qualcomm IPQ4019 Arm SoC for the router functions, and an Intel Celeron J4125 quad-core Gemini Lake processor for the NAS functions.

Usually, you’d get the choice of either an Arm or Intel processor, but here QNAP decided to use both to keep the same performance as having separate Arm-based router and Intel-based NAS, but in a much more compact form factor.

So what we end up having in this device are two separate products with an Intel NAS and an Arm router having separate ports, but at least they share the same power input… It looks to be possible to turn off the NAS, while the router is on as long as the system is plugged into the main.

The router runs QTS smart home management storage system on the NAS subsystem and QuRouter on the router subsystem. The solution supports WiFi Mesh through QMiro-201W units to extend coverage, QuWAN to connect the company network with your home network through SD-WAN, and can also be managed through QuRouter app. 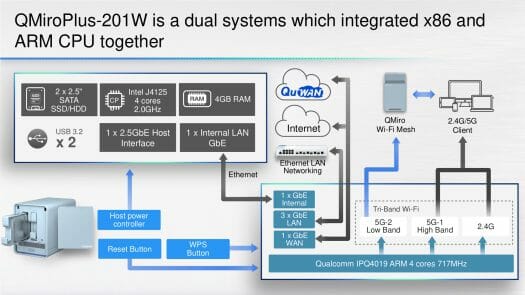 QNAP uploaded a 44-minute video presentation of the NAS router last month, but if you are short on time you could also flick through the presentation slides.

Such devices are often interesting as first acquisitions, but become problematic later when you want to replace only one of the function in them because the part you keep remains huge for what it does.

Since the NAS portion of the thing can be powered on/off separately if the Wi-Fi stuff remains main use case the NAS part could become a backup device powered on once every week/month. On the other hand the spinning rust idling in a backup NAS should be of large capacity and inexpensive and that’s not going to happen with 2.5″.

How do they manage to ‘downgrade’ the Celeron’s SATA ports to 3Gb/s?

My thoughts exactly.
Then again, having worked at QNAP in the past, nothing surprises me.

Maybe using a port multiplier, or even funnier, a USB controller instead of the native ports.

Maybe someone can help me with this: I want to build a NAS box using the same Celeron J4125 used by this QMiroPlus-201W NAS device, but I cannot find a standard motherboard with a J4125 on it. I can find lots of really small-form-factor boxes based on the J4125, but those won’t work well as the basis for a real NAS box. ASRock used to make an otherwise bare-bones mini-ATX board with the earlier Celeron J4105 soldered on it (none of these J41X5 Celerons are socketed), you could buy them for $76 on Amazon with “free” shipping.[1][2] ASRock sold zillions… Read more »