Jevois-A33 smart camera was a tiny Linux camera with Allwinner A33 processor designed for computer vision applications and announced in 2016. I had the opportunity to review the computer vision camera the following year, and it was fun to use to learn about computer vision with many examples, but since it relied on the CPU for processing, it would not have been suitable for all projects due to the lag, as for example, object detection took 500ms and Yolo V3 around 3 seconds per inference.

But time has passed, and great progress has been made in the computer vision and AI fields with the tasks now usually handled by a built-in NPU, or an AI accelerator card. So JeVois Pro deep learning camera has just been launched with an Amlogic A311D processor featuring a 5 TOPS NPU, and support for up to 13 TOPS via a Myriad X or Google Edge TPU M.2 card. 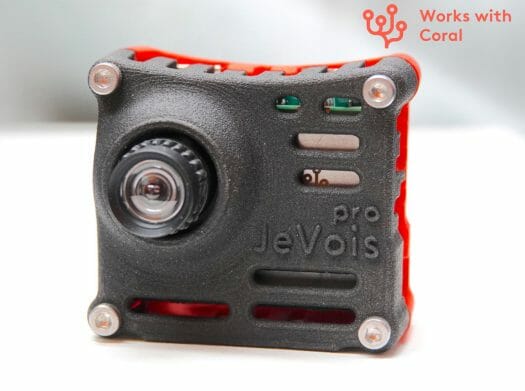 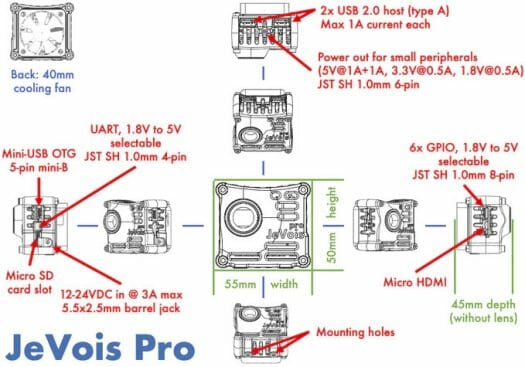 The Amlogic A311D camera is compatible TensorFlow-Lite 2.5, Caffe, ONNX, MxNet, and Darknet deep learning frameworks. Besides the preinstalled machine vision modules, it’s also possible to import/design your own custom deep learning models to run inside JeVois-Pro using machine vision pipelines in C++ or Python. Software development and testing can be first performed on a Linux computer, before cross-compiling the program for the JeVois Pro camera.

The code has been optimized for performance by DMABUF for zero-copy of images, and OpenGL to draw the overlays and GUI. The best way to get an idea of what the camera is capable of is to watch the video below. Note everything is rendered on the camera even the quad-view demo. The built-in 5 TOPS NPU works pretty well and can deliver over 30 times more performance than using the CPU only in some demos.

JeVois Pro is an open-source project, and all resources including software and hardware schematics will be released once the crowdfunding campaign is over. Development progress can be followed on JeVois documentation website, where you can also access documentation for the earlier JeVois-A33 camera.

JeVois launched the new Pro camera on Kickstarter with a $60,000 funding target. Rewards start at $379 for the Starter Kit with the camera, a 64GB MicroSD card, a micro HDMI to HDMI adapter, a GPIO cable, and a Coral Edge TPU card for up to 9 TOPS of combined AI processing power. The only other reward is a pack of three JeVois Pro Starter Kits for $999. Shipping is free to the US but adds $39 to the rest of the world. Backers should expect their perk(s) to ship in September 2021 barring any delays. Note that 13 TOPS is only achievable with a dual Google Edge TPU M.2 module that is not offered in the Kickstarter campaign.