The device looks very similar to an Android TV box, but it does come with some features specifically useful for digital signage players including optional 4G LTE connectivity, a watchdog timer to make sure the system continues running even after the system hangs, an on/off timer to schedule operating times, as well as screen orientation support for landscape or portrait operation. 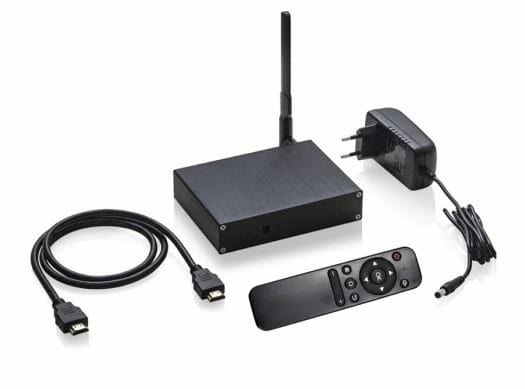 The timer on/off, watchdog timer, and real-time clock should be implemented through a separate microcontroller found on the board, and most TV boxes won’t come with that chip. I used to write software for digital signage boxes and boards and the timer was mostly used to automatically turn on/off the system during work hours, while the watchdog timer would automatically reboot the system if it failed to receive a “heartbeat” signal from the main processor within a period of time in order to ensure maximum uptime.

RKM DS03 digital signage player has been around for a while on Rikomagic website but the company has just started to sell it on Aliexpress for$169.90 with WiFi only or $209.90 with WiFi and 4G LTE connectivity.