Most robot arms are designed to carry and manipulate payloads, but HUENIT modular robot arm is much more versatile as besides a traditional suction module, the robot supports modules such as a 3D printer, laser engraver, pen holder for drawings, and a creator module for let people designed their own.

The robot arm can hold payloads of up to 750 grams, have a reach of up to 39 cm without module, supports WiFi and Bluetooth connectivity, and can also optionally be fitted with a 2MP AI camera module based on Kendryte K210 RISC-V processor with built-in AI accelerators. 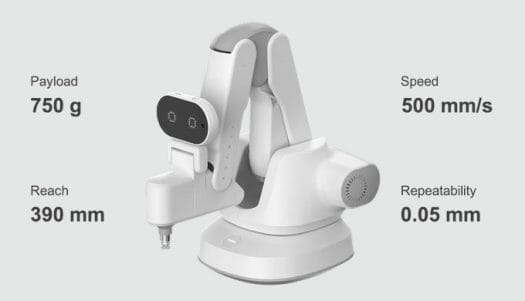 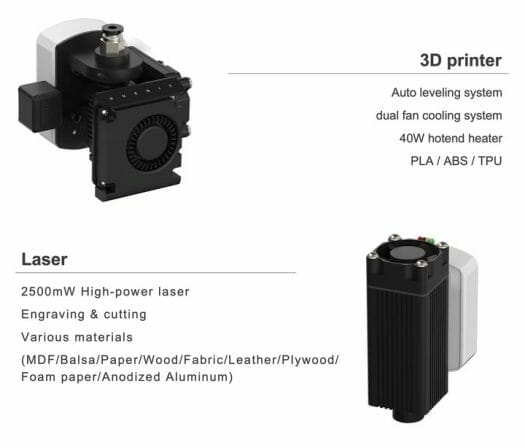 The company does not provide a lot of information about software but says the robot arm can be programmed with Block coding (visual programming), Python, Arduino C++, and G-code. As a side note, the Kendryte K210 processor is also used in Sipeed M1 module which we’ve tested with both Arduino and MicroPython, and that part should have mature software. More modules are in the work with a more powerful 7.5W laser, a soft gripper, a linear rail to extend the range up to 900mm, and others are considering including a blade cutting module and a 3D printer module supporting up to 6 colors.

The robot arm can also change modules by itself by using an electromagnet. That means you could set up a workflow for a small production facility with the HUENIT robot arm taking a piece of wood with the suction module, switching to the laser module to engrave a motif, and once done get to the next piece, and so on without human intervention.  You can watch the robot in action in the video below.

That looks fantastic! But the flip side is that it’s an incredibly complex project, and while I hope they can pull it off, there are clear risks to the project. We’re told teams based in South Korea and Germany have been working for two years on the robot, but it appears to be a start-up, and it’s their very first crowdfunding campaign. They have a list of over 10 collaborators, but all those are marketing companies aiming to help them raise funds. The manufacturer is not listed in the main description, but we can get more details in the FAQ where we learn the robot arm and modules will be manufactured and assembled in South Korea by a factory with experience in producing large motion CCTV and robots.

If you’d like to go ahead, you can join over 500 backers who help raise more than $400,000 on Kickstarter with 18 days to go. Rewards start at $579 for the HUENIT modular robot arm, a creator module, a module holder, power supply, and USB Type-C cable. The full “PRO” kit with the AI camera, 3D printer, laser, pen holder, and creator modules plus holders requires a $774 pledge. Those are the pre-Christmas prices after which there will be a $20+ increase for the perks. Shipping adds $49, and barring any unexpected delays, the rewards should start shipping in June 2022.

Adding another axis may bring it an auto-tool-change capability. It is still possible with a restricted tool placement though.

They have a printing bed which may be a heated bed (“40W heater”), but this is not entirely clear.