Banana Pi has showcased its first engineering samples of a Rockchip RK3588 SoM (system-on-module) with up to 8GB RAM and 128GB flash, as well as a development kit with dual Ethernet, three HDMI ports, SATA interfaces, PCIe interface, and more.

Rockchip RK3588 octa-core Cortex-A76/A55 processor is the most powerful from the company, both in terms of CPU and GPU power, but also with a wide range of high-speed interfaces, and will be found in the upcoming Radxa ROCK5 single board computer, and a yet-to-be-announced board from Pine64. 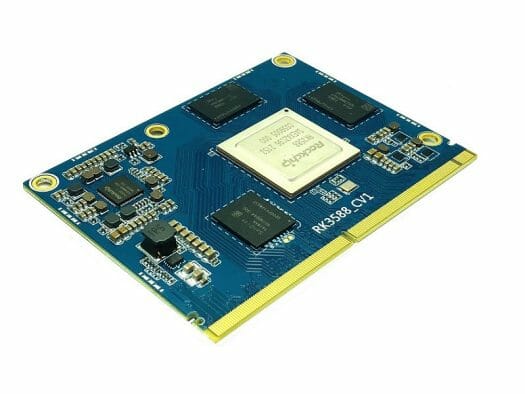 Assuming all components are on the top of the module, it means it only includes the processor, memory, storage, and power management circuitry, and all other features would be implemented on a carrier board via the edge connector. 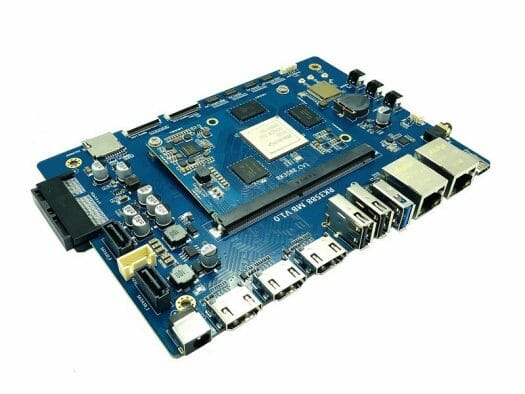 RK3588_MB “motherboard” is an example of that with two Ethernet ports, two SATA 3.0 ports plus power connector, three HDMI ports mostly like with two video output, and one video input, two USB 2.0 ports, one USB 3.1 port, 1x USB Type-C port, a MicroSD card slot, MIPI CSI/DSI interfaces, and a horizontal PCIe slot placed on the side of the board. I can also see what looks like WiFi + Bluetooth module plus three u.FL antenna connectors, and a power connector for a 12V/1A power supply.

You’ll have to be patient as Banana Pi says while the hardware samples are ready, they’ve only just started to work on the BSP. From what I’ve been told (and can see with my own eyes), Rockchip RK3588 is an incredibly complex processor, so it will take a while before the software is ready, and Q4 2022 is probably a reasonable target to have the most important features implemented. Once everything works, Rockchip RK3588 platforms should be over twice as fast as Amlogic S922X/A311D boards, and the difference will be even more striking with graphics-intensive workloads.

Happy to see the dev board exposing the dual SATA and dual NICs for NVR use. I wonder what the price will be.

Which SO-DIMM connector spec allows for that much pins?

The 313 is most probably caused by the SinoVoip clowns still not able to do technical documentation but just spitting out random characters and numbers. Asides that mechanically this looks like MXM 3.x (314 pins). Proprietary pin-out means you need to rely on matching carrier boards so good luck with this vendor…

The banana guys are still around? Who on earth buys their paperweights and why?

the price of RK3588 with pmic is $60!
It too high for embed design.
This price you can get lot choices from Intel,and may be better performance,and still no cpu fan for cooling.
Example:
Intel® Celeron® Processor J6413 $54
Intel Atom® x6425E Processor $56

IMO it’s too high for almost everything that does not make use of this SoC’s ‘special engines’ like camera support and stuff. And it has to be seen how vendor’s software support looks like for all if this ‘special’ stuff (Android only or also for Linux).

Edit: by vendor I mean Rockchip and not SinoVoip who pretend to ‘work’ on the BSP now 🙂

Indeed. Makes me kinda wonder why Intel doesn’t steamroll that market by adding MIPI CSI-2 lanes to a couple of their lower price range x86-based chips. Possibly even throwing in a few FPGA gates between the PHY and the CPU.
That would (unless of course messing it up by overpricing or closed specs) have a resounding success, especially since the PCIe&SATA connectivity e.g. for downstream storage are traditionally much better on x86 boards

While the linked announcement page of sinovoip/bpi themselves does indeed say “PCI 3.0” without an “e”, it would strongly surprise me if that was actually the case and not a typo on their part, as PCI 3.0 was a 64bit parallel bus back then in ye olde days (2004), which would not only seem quite pointless for a 2022 SBC and eat up too much of the connector and board real estate… but also be much slower than the much more plausible “PCIe 3.0”

> announcement page of sinovoip/bpi themselves does indeed say “PCI 3.0” … a typo on their part

This is not a ‘typo’ as it might happen sometimes. This is the long known process of letting the person in charge of SinoVoip’s ‘documentation’ and ‘community communication’ ruin the company’s reputation now for over 7 consecutive years. Unfortunately you can’t trust in any ‘information’ originating from them for the simple reason this person doesn’t give a sh*t about accuracy and just vomits random chars and digits into a wiki, forum, whatever.

If only it was just SinoVoip… alas, the mistake of trusting technical communication to (probably cheaper wage?) people who lack the necessary care and technical understanding is all too common. Even in bigger Corps like NVidia: here an example from the specs on their official page for the Jetson Nano Developer Kit (B01, with 2 FPC connectors for MIPI CSI-2 interfaced cameras): it misleadingly says: “Camera: 2x MIPI CSI-2 DPHY lanes” for the newer version where it said “1x MIPI CSI-2 DPHY lanes” for the older version that had only one connector and “Camera: 1x MIPI CSI-2 connector” on the… Read more »

Hello to all, i would like to do a question: Am I alone to have thought about that MB of SBC/CPU in general can start to have their own GPU? In china they started to sell intel/AMD MB with a GTX 1650/Super like this one:https://www.tomshardware.com/news/zeal-all-za-kb1650-motherboard-gtx-1650 Could be fantastic if IO MB for Rock&RB /pi have their own GPU integrated and work in parallel with iGPU of these Pis to have a better graphic experience specially for games. For example if this MB has Mali 10MP6 and work in parallel with iGPU of G610MP4, we can have at least double graphic… Read more »