UP Xtreme i11 is both a single board computer and a mini PC powered by an Intel Tiger Lake processor and designed for industrial edge applications. I received the one sample of the mini PC called “UP Xtreme i11 Edge Compute Enabling Kit” last December based on an Intel Core i7-1185GRE processor, fitted with 16GB RAM, a 128GB SSD, and pre-loaded with Ubuntu 20.04 operating system.

I’ve now had more time to play with the system, and I’ll report my experience with Ubuntu 20.04 and Edge Insights for Vision, a computer vision framework that’s part of the getting started guide. The latter was missing from my package possibly because customs opened the package, and forgot to put it back in. The most important part is “devkit” is used as username and password.

Software for UP Xtreme i11 and Fan Control

While Ubuntu 20.04 is pre-installed on the mini PC, it’s also possible can access the software for UP Xtreme i11 in UP Community with resources for Ubuntu, Windows, Yocto, etc…, 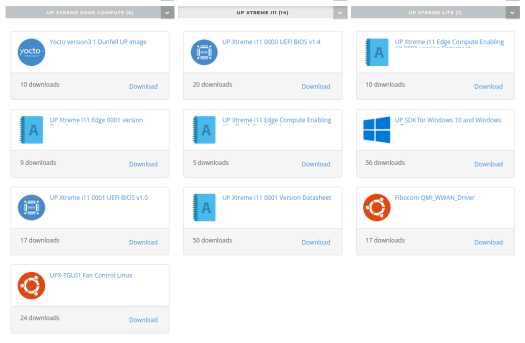 The main reason I’d mention this first is that, as noted in the first part of the review, the fan noise is pretty loud. I can usually accept some level of noise, but the fan noise here is really annoying. My girlfriend even asked me why the neighbor was vacuuming his house for so long, and at that point, I had to tell her it was not our neighbor, but my computer.

The good news is there’s a download for “UPX-TGL01 Fan Control Linux”, a script that will only turn on the fan when a temperature threshold is reached. We can download and install it as follows:

Output for the last command:

The fan will run at a much slower speed immediately after installation, and be barely audible. It’s running as a systemd service, so you won’t have to run any command manually.

If the temperature is less than 50°C the fan will run at slow speed, between 50 and 60°C, it will run at medium speed, and over that at full speed (and be extra noisy). I’d just wish it was installed by default.

I’ve run a few commands to check the system info in Ubuntu 20.04 after running apt dist-upgrade:

The system comes with an Intel Core i7-1185GRE quad-core processor clocked at up to 4.4 GHz, with 16GB memory, and a 128GB SSD. The extra USB drive is the MINIX USB-C docker with SSD that I used for testing. There are plenty of Ethernet interfaces because k3s Kubernetes distribution is running for the Edge Insights for Vision framework.

The system temperature reported by inxi is incorrect. Running the following command taken from the UpFanCtrl.sh script shows the actual temperature:

More system information can be found below.

I’ve already tested several features of UP Xtreme i11 notably in my reviews of a USB 3.0 to 2.5 Gbps Ethernet adapter and the 10.1-inch RPi all-in-one display where I tested both Ethernet and the DisplayPort Alt mode function of the USB-C/Thunderbolt port.

Download, as seen from UP Xtreme i11 mini PC, does work fine:

Upload performance could only be tested up to 1.7 Gbps due to issues with the USB to Ethernet adapter I used for testing.

The USB Type-C’s port DisplayPort Alt. Mode worked fine through MINIX NEO S2 USB-C dock. Since it comes with an SSD, let’s see what performance I get using iozone3:

Sequential reads are at about 440 MB/s or around 3.5 Gbps. The storage device is probably the bottleneck here instead of the USB speed. If we look at the USB ports speeds:

It looks like the USB Type-C port is rated 10 Gbps, but the MINIX USB-C dock is only 5 Gbps.

HDMI is working just fine with both video and audio as tested with YouTube videos in Firefox and Chrome. Testing with 4K is not working so well, but only because of my 10 Mbps cellular connection… Audio through the 3.5mm jack worked fine as well with headphones, so I didn’t have the same issues as on the Intel Core i5-1135G7 (Tiger Lake) powered Beelink GTi 11 mini PC which lacks audio support through HDMI and the audio jack. Ian could fix HDMI audio manually, but not the audio jack.

So that means everything works out of the box with UP Xtreme i11 mini PC, at least for the things I tested. I do not have the hardware with me to check DisplayPort output, the serial ports, and the GPIOs.

That said we can still see both serial interfaces are shown in bootterm:

The GPIOs are also showing up in sysfs:

As we’ll see just below, there are even BIOS options to configure the boot behavior of each pins.

I’m happy to get a system that just works considering all problems I had with other recent products I had for review.

A quick look at the BIOS

UP Xtreme i11 comes with AMI Aptio Setup BIOS/UEFI. 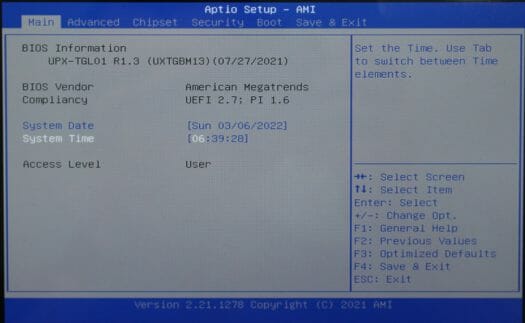 There are plenty of options in the Advanced tag, and if the fan is in issue, you can turn it off or slow it down by default as well. 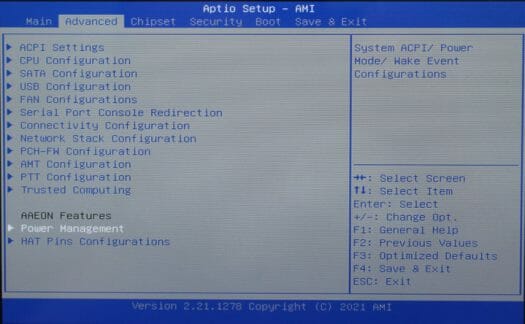 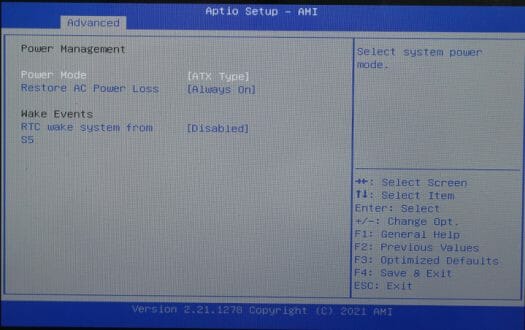 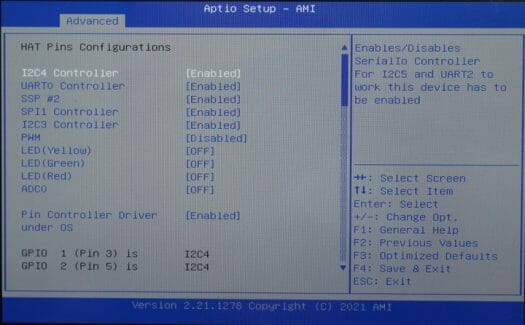 as well as the on-boot behavior of each GPIO pin from the mini PC’s terminal block. 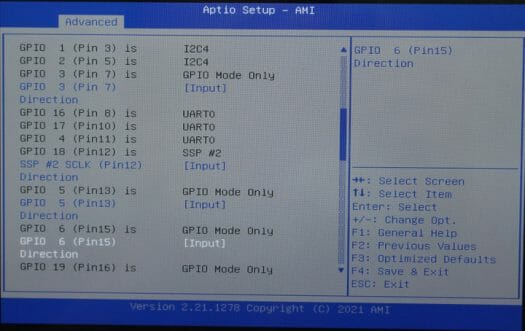 UP Xtreme i11 benchmarks

Let’s run some benchmarks to compare the performance against other mini PCs. 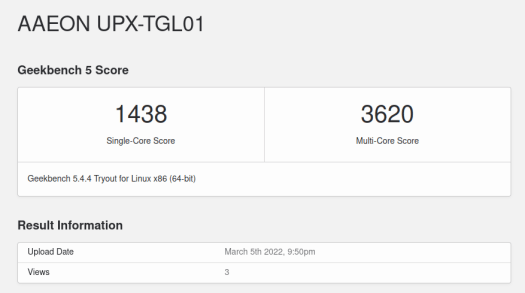 Check out the full results on the Geekbench website. 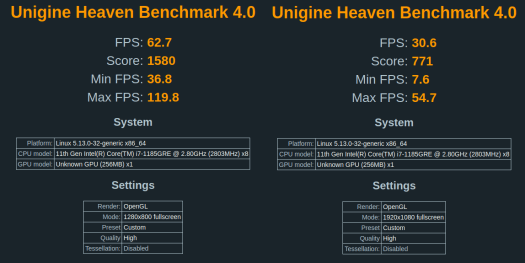 I ran the 3D graphics benchmark twice, once using the system’s resolution (I’m using a small HDMI display with 1280×800 resolution), and the second time with 1920×1080 resolution for comparison with other systems.

Let’s compare the results against four other mini PC from different processor families:

7-zip results are unexpected because I would have thought UP Xtreme i11, with a Core i7-1185GRE processor, would be faster than the Beelink GTI 11. 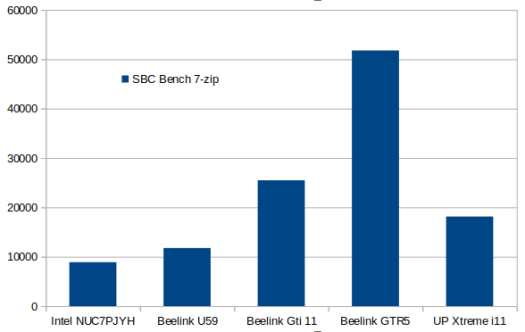 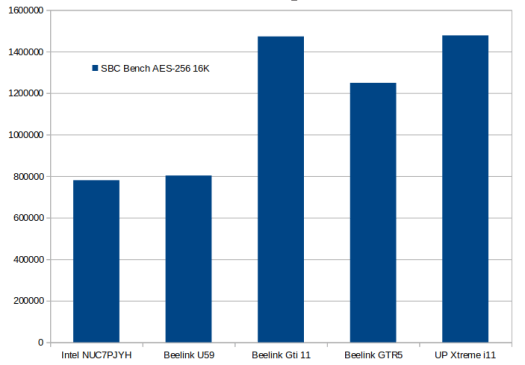 We can see what’s going in sbc-bench.sh log for UP Xtreme i11:

While single-core frequency is limited to 4 GHz, when all cores/threads are active it throttles to around 3.0 GHz. There was a similar effect with Beelink GTi 11, but the multi-thread was around 3.6 GHz:

One reason could be that Core i5-1135G7 is a mobile processor, while Core i7-1185GRE is an embedded processor with an extended/industrial temperature range (-40°C to 100°C), so the frequency may be limited to work under all conditions and make the system more reliable even at high or low ambient temperature. In order words, it might be a feature rather than a bug.

This behavior can sometimes be changed via some settings in the BIOS, but I could not find any “CPU Thermal Configuration” options to change power limits or throttling temperature. 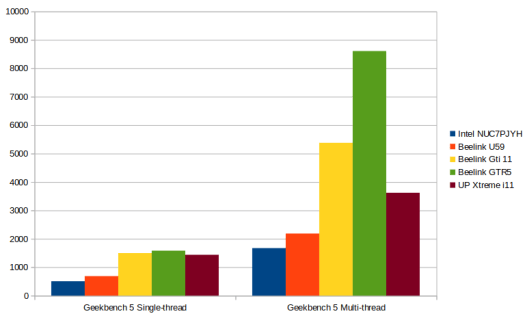 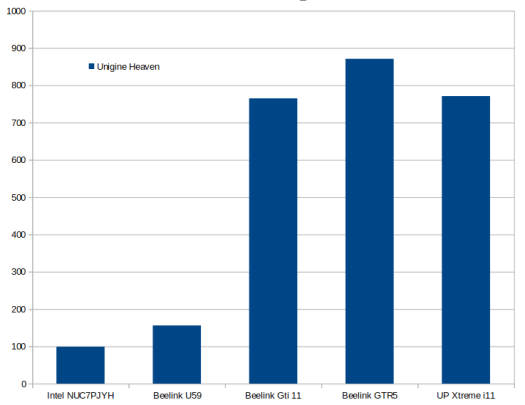 3D graphics performance, as measured with Unigine Heaven benchmark at 1920×1080 resolution, is basically the same for Beelink GTI 11 and UP Xtreme i11. 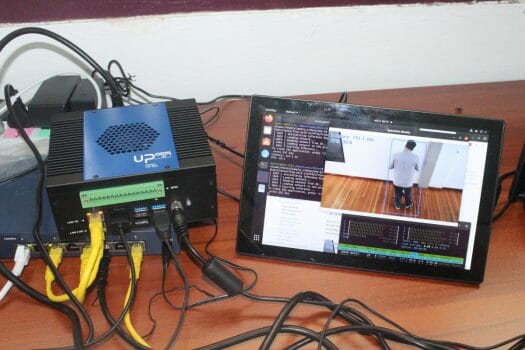 The Quick Start Guide directs us to https://www.intel.com/content/www/us/en/developer/articles/training/devkit-gsg21.html to test Edge Insights for Vision framework which relies on Intel OpenVino.

I’ll go through the “Single and Multi-Object Detection with Hardware Acceleration” section with demos using the CPU, GPU, and Intel Vision Accelerator, although I’ll skip the latter since my system is not fitted with an accelerator card.

Everything is pre-installed, so we can just enter the YOLOv3 folder, and initialize the environment…

… before running the first single object detection demo using the CPU only:

That’s the photo above and the screenshot below. 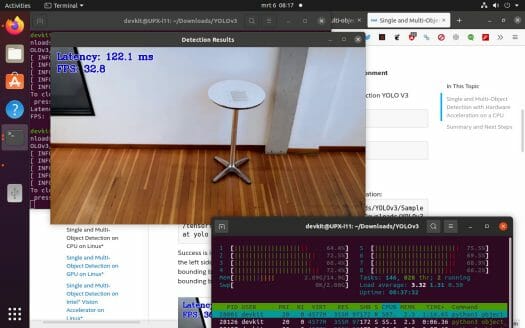 Latency is around 125ms, and CPU usage of the Python script over 500% on this 8-thread system.

Multiple object detection is similar with only slightly higher latency and lower FPS,

but this could be because of the source video that does not have many objects. 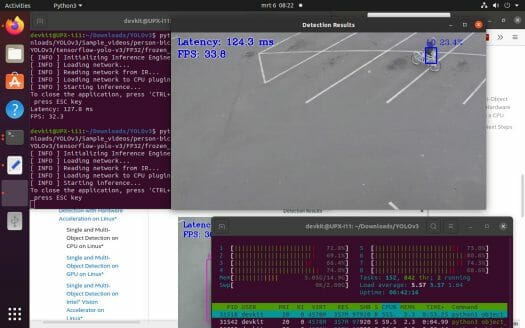 CPU usage for the main Python script was 555% at the time of the screenshot. 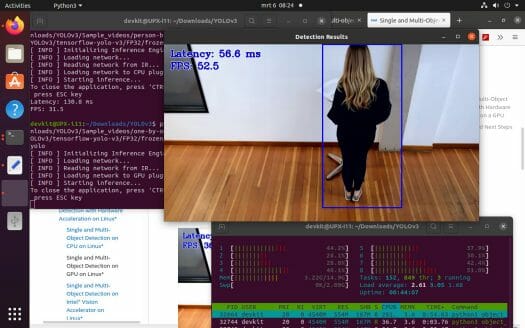 Latency has been roughly halved at about 60ms, and framerate doubled while CPU utilization dropped to 281%.

Finally, let’s do the multi-object detection with the GPU: 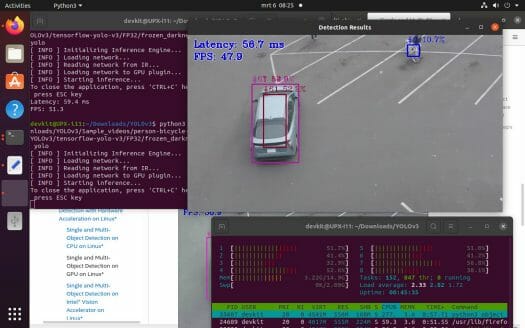 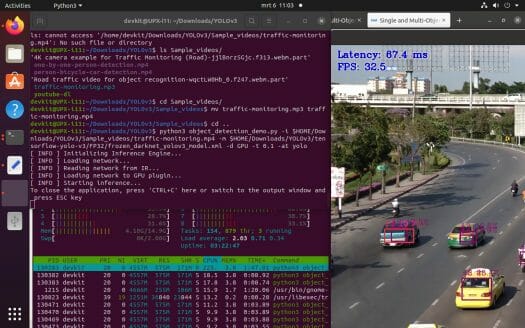 Latency is about the same, and so is CPU usage but FPS has dropped, but the main reason may be because of the higher resolutions. 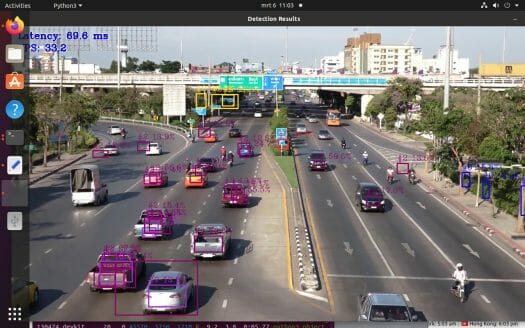 I can see most regular cars are detected unless they are too far away, but the model does not seem to have been trained to detect Thai pickup trucks that have been modified to transport goods (see left side) or motorcycles. The blue “Type #0” rectangle should be person detection, and there’s nobody standing on the right, but those are all under 15% confidence so they could be discarded.

I’m pretty happy with the UP Xtreme i11 mini PC, as everything works out of the box. I wish the fan would be less noisy, but considering it targets industrial applications there may be noisier equipment operating in the environment, and if it’s an issue its speed can be controlled in the BIOS or through a script as we’ve shown in the review. Note that’s a “hybrid” system in the sense that’s it is a fanless case with a fan block on top, so dust should NOT easily enter the enclosure.

The Intel Core i7-1185GRE “embedded” Tiger Lake processor @ 2.8/4.4 GHz has lower multi-threaded performance/frequency than the Core i5-1135G7 “mobile” processor @ 2.4/4.2 GHz, but it’s unclear whether there may be an issue with the system configuration, or that’s a deliberate choice to operating in a wide temperature range.

I’d like to thank AAEON for sending the UP Xtreme i11 Edge Compute Enabling Kit for review. The tested configuration sells for $1,319, but note the company’s changed the hardwaredesign in the latest “0001 Version Series” and the 16-pin GPIO terminal block is gone, and so is the USB 4.0 Type-C port. The BIOS has also changed probably to remove options related to those two features. If you have a tighter budget pricing starts at $385 for a barebone model with an Intel Celeron 6305E processor.

The terminal block and USB-C port are casualties of the global component shortage: