When 802.11.ah WiFi operating in the 900 MHz frequency range for low-power long-range communication was announced in 2014, then named WiFi HaLow in 2016, I naively assumed it would soon compete against other LPWAN standards like LoRaWAN or Sigfox.

However, over the next few years, we did not see much interest in the wireless standard. But it may be picking up now, as Gateworks recently announced a Newracom NRC7292 based 802.11ah WiFi HaLow Mini PCIe module for their Arm Linux SBC’s, and a company called TELEDATICS has now introduced the Halo TD-XPAH 802.11ah Hallow development board featuring an AzureWave AW-HM482 module. 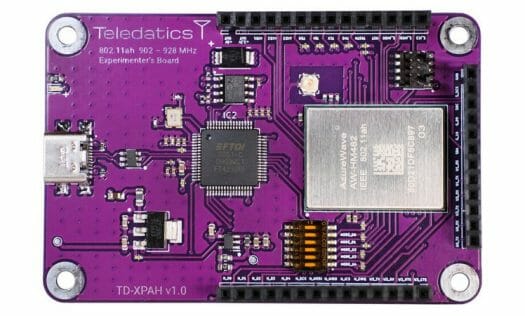 The board can be used as a standalone device, or as a USB device. The company provides both the firmware/SDK (nrc7292_sdk) and Linux drivers (nrc7292_sw_pkg) on Github, as well as a KiCAD 6.x template to create your own expansion board.

HaLo TD-XPAH WiFi HaLow development board and hAT expansion boards have just launched on Crowd Supply. The development board itself goes for $99, fur the company also offers a $29 air quality sensor hAT (temperature, humidity, air quality), a $49 WiFi gateway hAT with a 2.4 GHz 802.11n radio, and an Ethernet hAT also for $49. Shipping is free to the US but adds $8 to the rest of the world. Delivery of the hAT expansion boards is expected to start by mid-May, while the development board should be ready around three weeks later (first week of June 2022). That’s indeed significantly more expensive than LoRa and NB-IoT hardware, but at least there’s no need for a relatively expensive gateway since the board can act as one, and the higher bitrate may make it suitable where other competing LPWAN standards are not.

[Update: Initially published on December 20, 2021, the post was updated on March 2022 with the launch of the Crowd Supply campaign]

Important to note that this board is only suitable for regions which allow the use of the 902-928 MHz band like the US (not usable in Europe and many other countries). Don’t know if they have other versions for those countries/regions. Also 1km is in theory the outdoor, LOS range with a 1 MHz channel at 200 mW at MCS 10 (see https://www.riverpublishers.com/journal/journal_articles/RP_Journal_2245-800X_115.pdf), which yields a maximum of 170 kbps. To reach 15 Mbps you need to reduce range dramatically (it will depend on which combination of bandwidth, number of streams, and MCS the chip allows, but significantly less in… Read more »

Even though it lacks precise figures, this confirms it: they only manage to “ping” at the longer distances (1km to 1.5km), while video only works up to 600-700m. They don’t specify the bitrate, but insist that video quality isn’t important, so it’s probably quite low, very far from 15 Mbps, probably closer to a few hundred kbps. Still a pretty interesting result for some use cases of course.

The price will need to come down by about an order of magnitude (to around $10) to compete with LORA esp32 boards (which even have an onboard display). But since they are replicating function without a clear advantage, I don’t really see that happening. If access points supported HaLow it would be a different story, but as is this is just another good idea that took too long to come to market.

I think HaLow has a totally different use case than LoRaWAN. HaLow enables direct TCP/IP communication at a medium distance. While LoRaWAN has a bigger range it only allows for 27 kbps.

LoRaWAN is structured for sensors that periodically upload data. It’s not very good for devices that might need to act on upstream commands at any time with low latency,

Single channel LoRawan gateways can be deployed using cheap esp32 boards. You dont even need to participate in LoRaWan at all for private deployment, just use straight up lora.

Either way this is very different to LoRa, 10x the transmit power as LoRa, lower range, higher bitrate. There are already expensive wifi long range solutions. So it seems this fills a small niche for lower price than those, maybe camera at end of driveway stuff once you figure out power.

$99 will give me just one board. So to have something I can work with, I have to buy at least two boards. That’s a bit expensive. I mean developers who test these boards will promote them and do them a favor. So I think the should subsidies them and make them cheaper like $30 per board.