We first noticed 802.11ah WiFI LPWAN standard operating at 900 MHz for the Internet of Things in 2014, followed by Newracom NRC6101 chip in 2015, and the following year the Wi-Fi  Alliance decided to call the new standard “Wi-Fi HaLow“. I was expecting it to compete with the likes of LoRa and NB-IoT, but I have not heard much about it, and when I asked a WiFi module and board supplier earlier this year, they seemed surprised I would even be interested in this type of hardware and, obviously, did not have any… So it’s good to see some new hardware coming out. 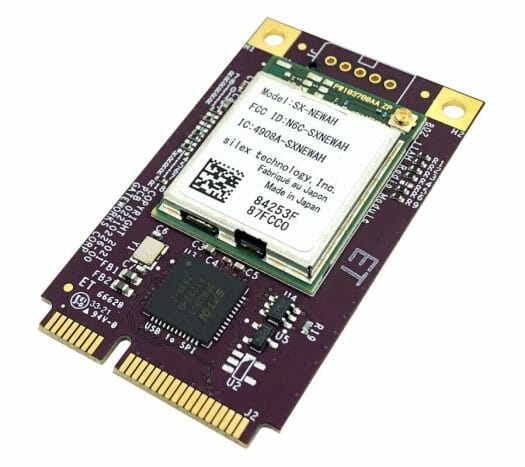 Gateworks provides Linux kernel drivers for FT232H USB to SPI bridge and the NRC7292 SPI radio chip. as well as required firmware file, and a userspace client app to configure the NTC7292. All those are already integrated into the Ubuntu 20.04 image for Venice and Newport ports, but the company asked customers to contact them for Ventana SBCs’ support.

The NRC7292 SoC is designed for many of the same applications as other LPWAN standards including IoT applications, wearables, industrial automation, Smart Agriculture, healthcare, safety & security, the Smart Grid, etc.. but also “multimedia streaming” thanks to the higher 4 Mbps (mPCie card specs) or 15 Mbps (chip specs) bitrate.

Gateworks also published a blog post about W-iFi HaLow that includes the chart above comparing various wireless standards. Based on this chart, we can see the battery life is similar to Bluetooth and Zigbee, but apparently much better than LoRa and Sigfox, but HaLow has much better Tx & Rx efficiency,  while Sigfox and LoRa shine in terms of range (up to 10km+). The information provided in the chart should probably be taken with a grain of salt, as it shows standard WiFi battery life similar or even better than Sifgox or LoRa. It might be possible to achieve those results under specific, atypical conditions (e.g. always on radio with Tx or Rx), but there’s a reason why we don’t see WiFi devices with 10-year battery life…

Gateworks GW16146 WiFi HaLow mini PCIe module is available now at an undisclosed price. Note it does not come with an antenna which needs to be purchase separately togerther with an SMA to u.FL cable. Additional information can be found on the product page.

It’s nice to see a comparison with other technologies. I thought LoRa and friends were good for battery life. Maybe only when sending short data and not for large blocks in fact.

Yes, I suspect that this is for large transfers only. But there is another issue; LoRa modulation is relatively slow so large transmissions over long distances can consume a lot of airtime and creep up on legal maximums for the 900MHz ISM band. I don’t know what sort of modulation this uses, but it could be a lot faster than LoRa meaning that the range is worse (as shown in the diagram), but the airtime per packet is much smaller too.

What I do not see mentioned with HaLow is latency, or how many devices can be on the same network. Regular Wi-Fi excels at these, but is too inefficient, what about HaLow, then?

HaLow can support up to 8191 nodes / clients / stations. Latency is considered low, but I don’t have exact numbers. Perhaps some can be found through searching google.

It does not know either. Where did you get that number? Are those multiplexed or simultaneous connections?

Jean, I wish this was true. 4mbps is the max speed when the devices are close, at 1 km the speed is 150 kbps, fix the article