The new system-on-module follows the iW-RainboW-G40M module with NXP i.MX 8M Plus processor and OSM Size-L (45x45mm) form factor launched at the beginning of the year. The iW-RainboW-G46M comes with 2GB RAM and 8GB flash by default, Gigabit Ethernet, PCIe, and CAN interfaces among others, and can operate in a wide -40°C to +125°C temperature range. 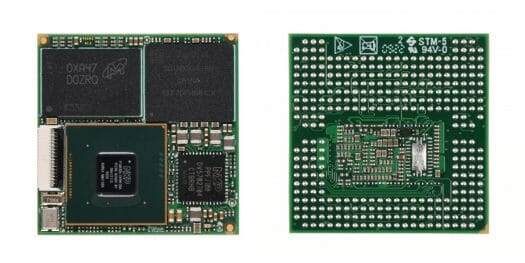 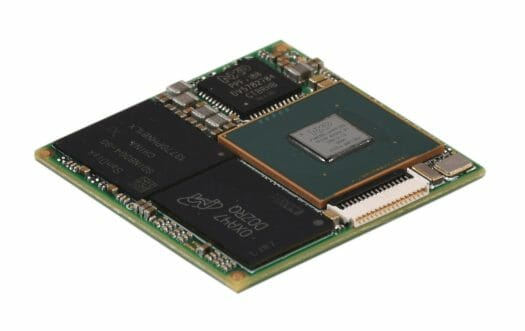 The company provides Linux 5.4.7 (or higher) and Android 11 (or higher) BSPs for the module, with Ubuntu OS also mentioned. iWave Systems expects it to be used in Vehicle-to-Vehicle communication (V2V), Vehicle to Infrastructure (V2I) and Vehicle to Network (V2N) applications, as well as Industrial IoT, control, and connectivity applications. A development kit for the system-on-module is also available, but no details were given about it. The earlier iW-RainboW-G40M devkit is a Pico-ITX carrier board, so it might be the same for the new i.MX 8XLite module.

Pricing has not been made public, but we do know the board is part of a 10-year product longevity program, so it will be available at least until 2032. Additional information may be found on the product page.

So it’s BGA, not LGA, or am I missing something ? Anyway I’m impressed by their ability to place components on the ball side!

Yes, it indeed looks more like BGA, but iWave Systems use LGA in their press release and product page.

I find it very difficult to get excited about i.MX-anything because they’re always so spectacularly outdated at launch. I get that their value is in their LTS production promise… but when something is dinosaur-toothed at launch it makes even less sense to invest in it, let alone for 10 years. They’re defeating their own purpose. It’s worked for them in the past with microcontrollers and seriously-outdated application processors that only they could supply… but the world isn’t so much a captive audience for this stuff any more… they are really shooting themselves in the foot now… okay well maybe not… Read more »

You don’t invest in imx for ten years. You make a product once at considerable expense and hope that you can actually get the parts for the next ten years so you can sell enough of them to make your money back.

If you don’t think a 10 year commitment to handing your money to a vendor is an investment, hey, could you not invest in my products for 10 years pretty please? $;)

It depends. For example if your car is having a review after 3 and 5 years, you’d rather not learn that it needs a very expensive component to be replaced because the old one is no longer supported despite still working fine, nor do you want to hear that you need to replace for $5k of computer stuff because one tiny component died and the previous ones are not produced anymore.

And I addressed that in the initial comment. I get that the USP is the LTS. I just disagree that A35 is a good choice between the long-term prospects of 74-series TTL, 4k series CMOS, Atmel, TI-MSP, ARM-M4, nano-FPGA, and A55. If they’re going to do a cheap LTS application processor, today, it should be A72 (old node) or A55 (small efficient), not A35. A35 is so slow that a high-clocked M4 will nearly catch it, and the M4 is way cheaper to license.

The present design model just rewards designers and software writers by paying them to do the same work over, and over.

So much for standards, ensuring compatibility.