Qualcomm unveiled a new Wireless AR Smart Viewer Reference Design powered by the Snapdragon XR2 platform last week with very few details, but the company has now demonstrated the system to some members of the press, so let’s have a closer look.

The reference design aims to provide a similar level of performance as a headset connected to PC or premium smartphone, but with some of the processing offloaded to the Snapdragon XR2 processor, thereby eliminating the need for a cord while still achieving lag-free experiences in combination with the Qualcomm FastConnect 6900 WiFi 6 and Bluetooth 5.3 solution. It is supposed to offer a 40% thinner profile and a more balanced weight distribution than the earlier Snapdragon XR1 smart glasses reference design. 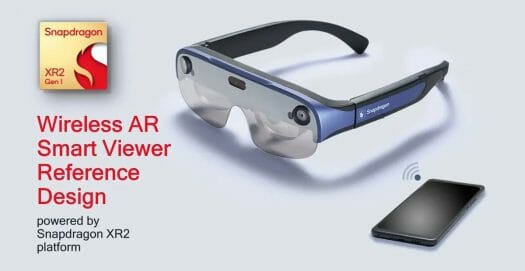 The system is supported by the FastConnect XR software suite with features such as head and hand tracking, 3D reconstruction, and boundless AR, and the press release also mentions “immersive experiences that unlock the Metaverse”.

a smartphone receives the stream and does the heavy computing (3D, AI, video encode), all with a 20ms motion to photon latency, according to Qualcomm. The glasses decode the video stream sent by the smartphone, and the process repeats for every frame.

Qualcomm has already made the wireless AR Smart Viewer reference design available to select partners, and wider availability is expected in the coming months. So I’d assume similar products, most probably for the enterprise market, will become available by the end of the year or in Q1 2023.

Have they got around the worries of VR eye damage?
” A software developer has tweeted about how wearing a VR headset for hours a day has damaged his eyesight. ” June 2020.