While it may be hard to buy a Raspberry Pi these days, there are various alternatives with the Raspberry Pi 3/4 form factor, including Pine64’s Quartz64 Model B SBC powered by a Rockchip RK3566 processor that has just launched for $59.99 with 4GB RAM.

The Quartz64 Model B is a smaller version of the Quartz64 Model A launched earlier this year, that comes with HDMI 2.0a and MIPI DSI display interfaces, a MIPI CSI camera interface, Gigabit Ethernet, WiFi 5 and Bluetooth 5.0, as well as several USB 2.0/3.0 ports, and of course, a 40-pin Raspberry Pi compatible GPIO header. 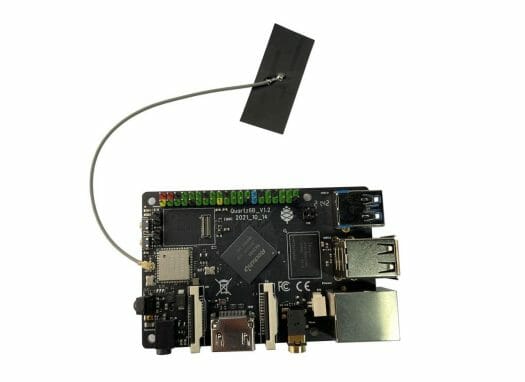 While the specs are pretty much the same as during the initial announcement in April 2021, the PCB has been redesigned quite a lot, and Pine64 appears to have settled on the Ampak AP6265 wireless module. While the software has progressed a lot, and for instance, Manjaro Linux with Plasma is said to perform well at 4K resolution thanks in part to Panfrost open-source Mali GPU driver providing 3D graphics acceleration, we’re still told that “Quartz64 SBC [is] still in early development stage, only suitable for developers and advanced users”.

Other supported operating systems are Android 11, Arch Linux Arm, gwipeout’s Quartz64 CI (Debian Installer + buildroot rescue), and NetBSD (relying on Tianocore EDK II UEFI port) of all which you can find in the Wiki. LAKKA OS for retro-gaming might be ported to the board as well. Mainlining is also in progress with initial support for Quartz64 Model A and B, and the SOQuartz module to be introduced into Linux 5.19, as well as the VOP2 driver for HDMI, but the DTS change for the latter will somehow only get accepted in Linux 5.20.