Yuzuki Chameleon is an open-source hardware single board computer powered by an Allwinner H616 quad-core Cortex-A53 processor that somewhat follows the shape of Raspberry Pi 3 Model A+ SBC with a different port layout that should still keep mechanical and electrical compatibility with some Raspberry Pi HATs.

The board supports up to 2GB RAM, up to 128GB eMMC flash, features a MicroSD card slot, one 4K-capable HDMI 2.0 port, an audio jack, four USB Type-C ports to keep the design as slim as possible, as well as a wireless module for WiFi and Bluetooth and a connector to optionally add Fast Ethernet through an external module. 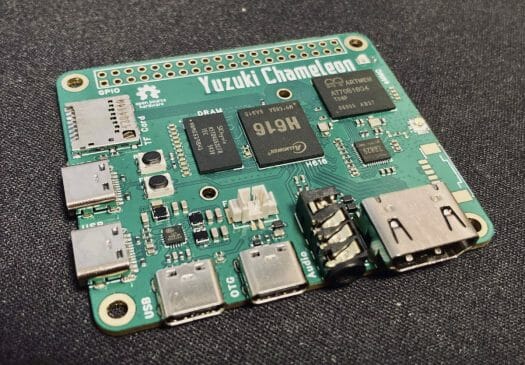 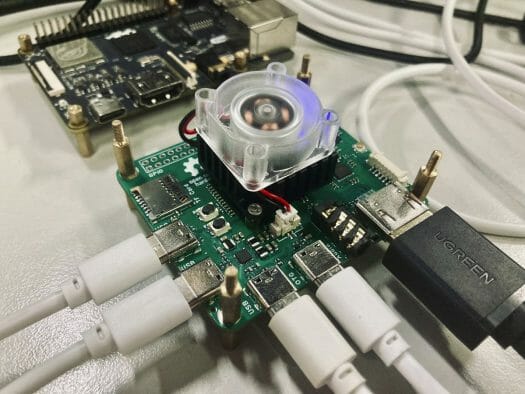 The Allwinner H616 SBC has been designed with EasyEDA and is open-source hardware with the design files and datasheets on Github under a “CERN Open Hardware Licence Version 2 – Strongly Reciprocal” (CERN-OHL-S) license. You’ll also find the Tina Linux source code there, but the developer (YukuziHD) also plans to release Ubuntu 20.04, Armbian, Android TV 10, Android TV 12, and Android Auto images for the board. 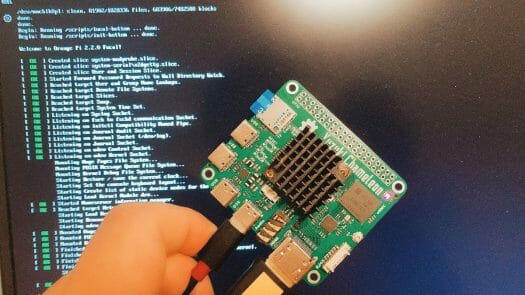 The Yuzuki Chameleon SBC can be seen running an Ubuntu Focal image apparently made for an Orange Pi board, likely the Orange Pi Zero2 since it’s powered by Allwinner H616 SoC. The Chameleon board is not the first Allwinner H616 single board computer based on Raspberry Pi form factor either with the MangoPi MQ Quad recently launched with the smaller Raspberry Pi Zero form factor, which bodes well for software support. Mainline Linux appears to be progressing as well with a few more bits and pieces added to the upcoming Linux 6.0 kernel.

YuzukiHD does not appear to be selling the board (yet), but I can see a price tag of 172 CNY (about $25) on OSHWHub where you’ll find additional photos and links to order the PCB and components to make your own. The caveat is that you’ll need to read Chinese, and possibly be based in China to order from those links. Mandarin speakers may also be interested in a video where the developer appears to go through the schematics and 6-layer PCB layout design.

Any evidence for this?

He probably just used the heatsink and fan he had on hand. There are plenty of Allwinner H616 devices that do not come with a fan.

And these pictures show the board ‘hanging’ caused by thermal issues?

The Allwinner H6 was launched in 2017, and we first noticed the H616 in February 2020, so it’s quite newer and includes a more recent GPU.

It is now possible to buy this board on Aliexpress
https://fave.co/3ux3kqZ

Received mine from AliExpress yesterday. Will be trying it out this weekend. Should appear on WikiDevi soon.