NewAE Technology’s ChipWhisperer-Husky is a compact tool designed for side-channel power analysis and fault injection with features such as a high-speed logic analyzer used to visualize glitches, real-time data streaming for attacking asymmetric algorithms, and support for JTAG/SWD programming.

The security research company explains its device delivers a more stable and reliable experience compared to other off-the-shelf test gear such as oscilloscopes and function generators thanks to features such as synchronous sampling, which means the sample clock of your target device and the sample clock of ChipWhisperer-Husky can be perfectly aligned, or the ability to generate glitches, including clock glitches that can be less than a  nanosecond wide. 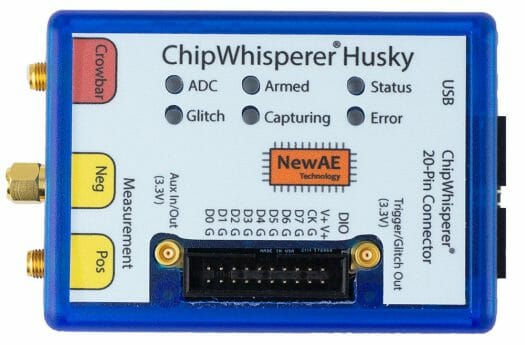 While the ChipWhisperer-Husky is not OSHW-certified, the core – including the Xilinx Artix-A15 FPGA logic, Microchip SAM3U microcontroller firmware, and computer code – is open-source and can be found on GitHub, documentation on RTFM, as well as on a separate GitHub repo with interactive ChipWhisperer tutorials using Jupyter notebooks.

NewAE Technology has been around for a while and we wrote about their PhyWhisperer-USB tool for USB security testing in 2019. They had introduced the ChipWhisperer-Lite and ChipWhisperer-Nano in the meantime, and the ChipWhisperer-Husky is just an evolution of the previous design with an enclosure and extra features.

The ChipWhisperer-Husky side-channel power analysis and fault injection tool launched on Crowd Supply a few weeks ago and raised over $75,000 so far. It is offered as part of a $549 Starter Kit with the ChipWhisperer-Husky unit, a CW313 target baseboard, iCE40 FPGA target, SAM4S Arm processor target, USB cables, SMA cables, 20-pin straight-through, and breakout cables, and suitable to run most of the tutorials for the solution. Worldwide shipping is free, and deliveries are expected to start in March 2023 with the company having secured future deliveries of core components for at least 400 units.

I was very interested of this for my home lab, until I saw the price. Eep
To make it interesting for professional use, J1939 and CanOpen fault injection is missing

Considering all of the features, the price is pretty good, from my point of view.