I’ve now had more time to play with Zidoo M6 Arm mini PC powered by a Rockchip RK3566 quad-core Cortex-A55 processor. I intended to review the device with Ubuntu, but I misunderstood, and Android 11 was pre-installed on the device. I was also told since this model is mainly for industrial control, I might want to focus on performance and connectors rather than how well all functions work.

So this will not be a review, but rather a preview of Zidoo M6, since as we’ll see below there’s still more work do to fix all issues. As an industrial platform. some features like Google Services may not be needed or even desirable. 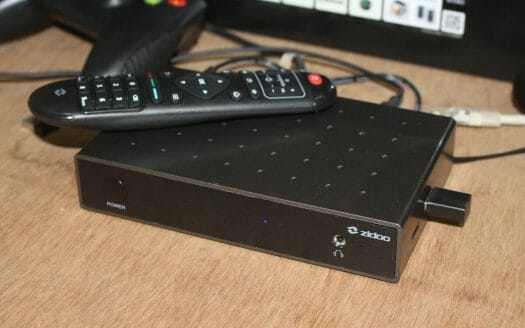 I’ve connected a USB keyboard for screenshots, MINIX NEO A2 Lite air mouse, an HDMI cable to my 4K TV, and the power supply to get started. I also add two AAA batteries to the IR remote control. Pressing the power button on the unit or the IR remote control will start the device. The boot is quite fast and we can get to the launcher within 25 seconds. 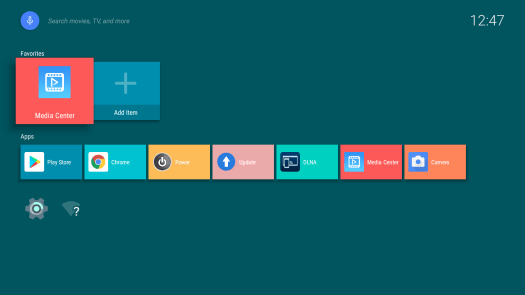 There are just a few apps pre-installed with the Play Store, Chrome, Power control, Update function, DLNA, Media Center, and Camera app. I could connect to my 5 GHz WiFi access point with no issue, but I initially was unable to use the Play Store nor Chrome getting the error message “The device isn’t Play Protect certified”, as Zidoo M6 is not certified, and instead, I had to register the device with Google to use Google services normally, and I could install all programs I needed from the Google Play Store without issue. 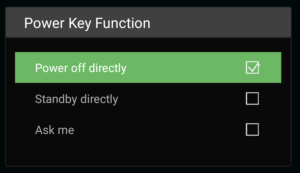 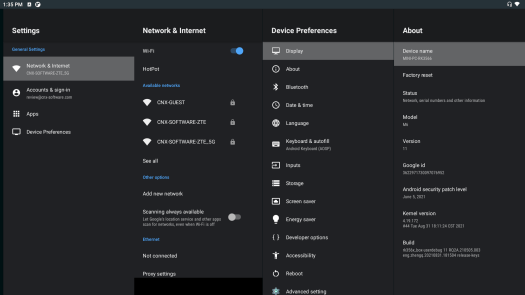 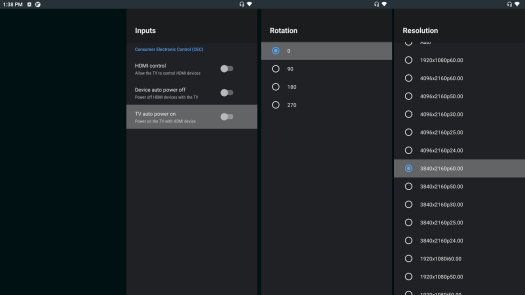 Video settings enabled me to set the video output to 3840x2160p60.00, HDMI CEC is supposed to be supported but I have not tested it since I’ve never managed to make it work with my TV or AV receiver, and people interesting in digital signage applications will be pleased to know screen rotation can easily be adjusted. 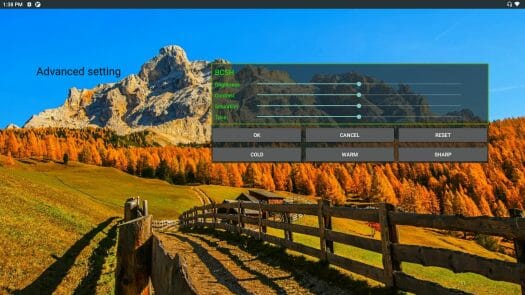 There’s also an Advanced setting for video output that allows control of brightness, contrast, and saturation. A separate Advanced setting menu brings option to hide the system bar, or add “Performance dialog” showing CPU, RAM, and Networking use on the top left corner of the display. 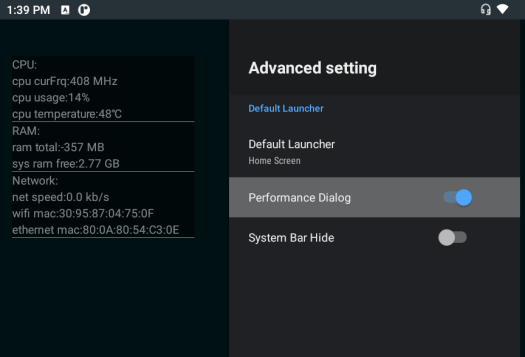 I’ve already written a separate post with RK3566 benchmarks and system info, but here are again CPU-Z and Antutu 6.0.2 results for reference.

CPU-Z shows some of the 4GB of RAM is used for hardware buffers since the total RAM available to Android/Linux is just 3755 MB. The available storage on the 32GB flash is also 24.12GB, so other partitions take around 8 GB… Note while Root Access is set to No, I could use adb as root without any problem. 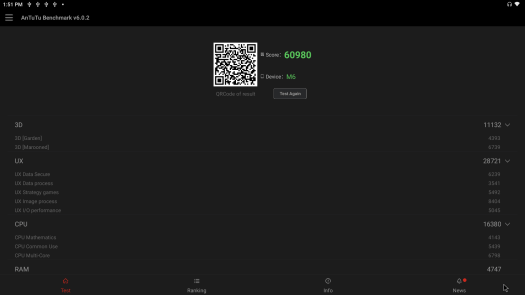 Rockchip RK3566 CPU performance is similar to Cortex-A53/A55 platforms clocked at 1.8/2.0 GHz, but the Mali-G52 GPU provides a significant boost in terms of graphics performance compared to older SoCs like Rockchip RK3328, Allwinner H6, or Amlogic S905X with older Mali-4xx or Mali-7xx GPUs.

This is what the results looked like for a full-duplex transfer in the terminal of my PC:

The segmentation fault happened again at the second try:

But in Android we can see the complete results. 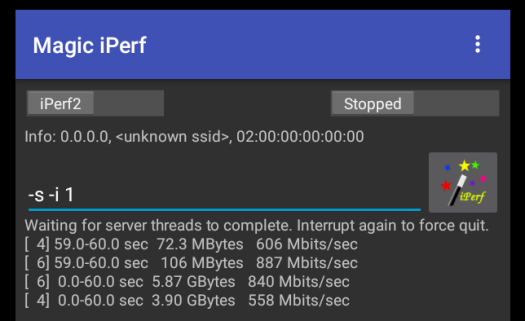 887 Mbps and 558 Mbps are OK, and typical on most Arm hardware. This is also a worst-case scenario with simultaneous upload and download at max speed that will not happen for most workloads.

If I try download only mode, the system reaches 940 Mbps:

And it’s about the same for upload only: 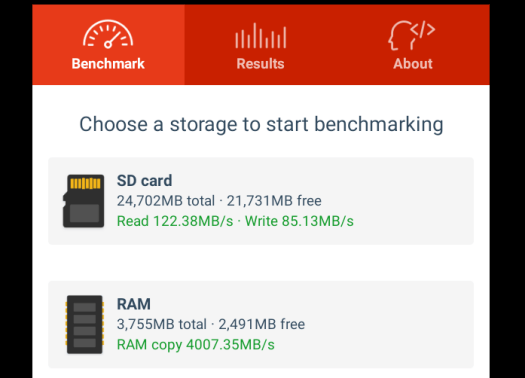 The internal storage is relatively fast compared to most other Android devices I reviewed. 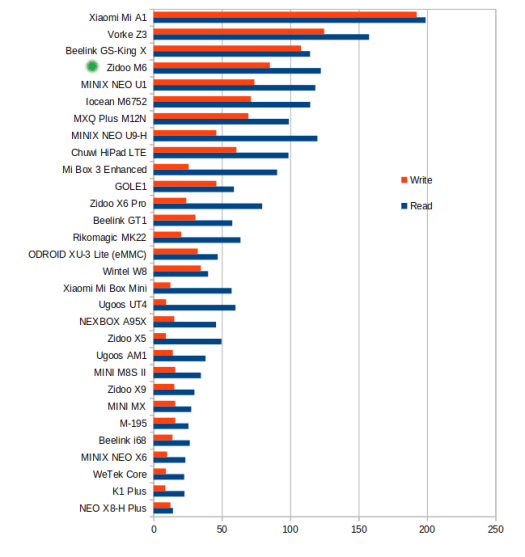 But note that many of those devices are older ones with 8GB and 16GB flash.

While Zidoo M6 does not have a USB 3.0 port, I still connected my USB hard drive to one of the USB 2.0 ports to check supported file systems, and see if we can get the usual 35 to 40MB/s over the slower port. But the first time I connected my USB hard drive nothing happened, so I decided to reboot the mini PC, and it took 35 minutes (not a typo) to get to the launcher. My hard drive is a bit unusual as it comes with four partitions, and contains lots of files including videos, but also some source code with many small text files, and I think the system would scan the drive to create a searchable database of the drives. The very slow boot only happens the first time, after that it takes ~30 seconds to start the device. 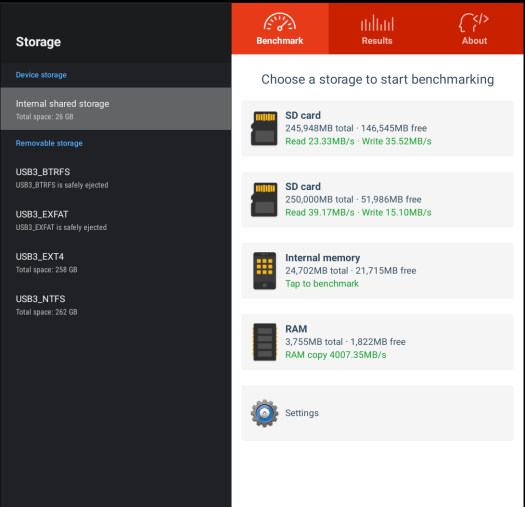 The current Android firmware could mount the NTFS and EXT4 partitions of the drive, but not EXFAT (many other devices can), nor BTRFS (I’ve yet to see an Android TV box support it). Performance is mixed with 39.17 MB/s read and 15.10 MB/s write with NTFS and 23.33MB/s + 35.52 MB/s with EXT-4. It can probably be improved with some software tweaks. Or is it? After testing video playback (See below), I found out there may have been a background process slowing things down, so I re-tested the partitions.

This did not change the write speed results, but the read speed of the EXT-4 partition was faster, the one of the NTFS partition slower… It should probably be possible to ask Zidoo to disable whatever causes those variations.

Zidoo M6 mini PC/SBC is not particularly well-suited for people wanting fast or large storage since the only options are the eMMC flash (up to 128 GB), or a MicroSD card slot. There’s no internal M.2 or mPCIe socket with SATA or PCIe (only USB 3.0), nor SATA interfaces.

The hardware can basically decode all 4K videos smoothly from those samples, it’s the first time it happens to me. That’s not without some issues, as some videos with AC-3 audio played without audio, there’s no automatic frame rate switching in Media Center (all videos played at 4Kp60 video output, but that was expected), and the hard drive may have been busy during my first test with frequent audio cuts, possibly because of a scanning process running on the background, but later on, all audio cuts completely disappeared… 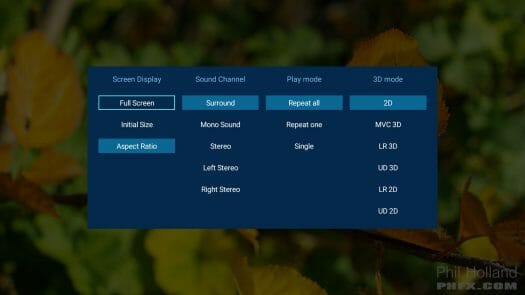 Media Center also supports 3D video playback (MVC, SBS), but since my TV does not support it I did not try. I could not test HDR either for that reason, and I initially did not play to test HDMI audio passthrough since it’s was likely not implemented yet, but change my mind to have a quick try. If I connect Zidoo M6 through my ONKYO AV receiver, I can access the launcher and some apps, but when I start Media Center app, the screen goes dark until I press the Home Button to return to the launcher. I eventually left it dark to see what happens, and about 5 minutes later I could enter the Media Center UI, but doing anything in this UI would lead to an “over time” message, and a nlue screen again lasting for a few minutes. I’d assume there may be some interoperability issues during the HDMI handshake.

As an industrial platform, Zidoo M6 is certainly not designed to be a gaming machine, but 3D graphics may still be used for complex UIs, or interactive kiosks may have some 3D games or interfaces. So I still planned to try some of the 3D games I normally use in reviews. Sadly, I was unable to install Riptide GP2 via the Amazon app, tried Beach Buggy Racing 2, but the developers bodged implementation of gamepad support and I could only play one trial, so I reverted to using Beach Buggy Racing with Tronsmart Mars G01 wireless gamepad, and maxed out graphics settings. 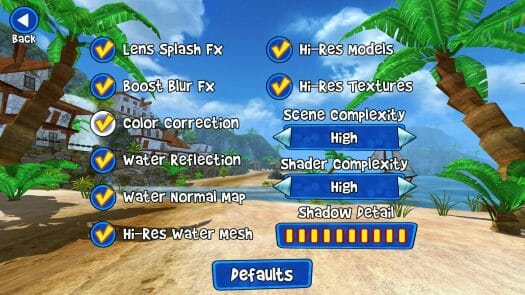 I played for about half an hour. The game was smooth and the device did not overheat during that time. The temperature was 37 and 44°C at the top and bottom of the case respectively, and CPU temperature only reached up to 63°C, which left plenty of legroom before eventual throttling. 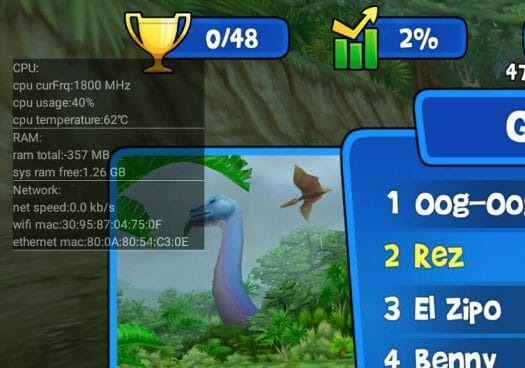 That’s quite typical of Cortex-A55 platforms that are much more efficient than Cortex-A53 cores, coupled with a recent, efficient Mali-G52 GPU. So the heatsink we’ve seen in our teardown is plenty enough for proper cooling.

Android 11 firmware for Zidoo M6 still needs some work, but Rockchip RK3566 has potential and a clear improvement over the Android platforms I tested in the past with faster 3D graphics, better handling of various 4K video codecs, and the mini PC itself is fitted with reasonably fast eMMC flash, and the networking part work well with both Gigabit Ethernet and WiFi 5 delivering good throughput. Zidoo M6 may be well suited as an IoT gateway with a mini PCIe slot for 5G, 4G LTE, or other mPCIE USB 3.0 wireless modules, but for anything requiring large and/or fast data storage, you’d need to find another solution. It’s also suitable for digital signage with HDMI 2.0 output and settings like built-in screen orientation, and if you’re going to use the board only you’ll also have access to eDP, MIPI DSI, and LVDS interfaces, none of which I could easily test here.

I’d like to thank Zidoo for providing M6 for review. The device is not available for purchase online, but you can check out the product page for the mini PC and board, and contact Zidoo if you are interested. I’ve also received a link with an Ubuntu image which I’ll use for the third part of the review.

this product supposedly have a android, ubuntu, etc firmware, but none of these are available to download in the website, so how do you change the firmware?

They seem to have abandoned the device. No download links, and no M6 section in the forum. Or they don’t bother sharing those directly, because the Zidoo M6 is for business customers.