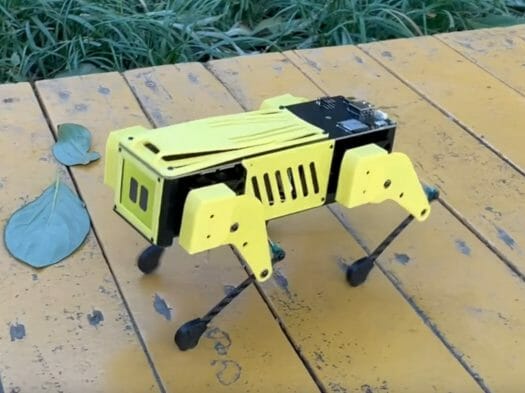 I understand the only difference between using a Raspberry Pi 4 or Raspberry Pi CM4 is that the latter enables a slightly thinner robot. The system runs Ubuntu 22.04 Linux OS with ROS2 or ROS1 robot operating system with the ability to control the robot with a keyboard, a web interface, or a mobile app. There’s no information about those just yet, but some tutorials can be found on the work-in-progress documentation website. The company also provides the source code for its robots on GitHub.

MangDang has launched the new Mini Pupper 2 on Kickstarter. Rewards include the $429 Mini Pupper 2 Basic Kit without Raspberry Pi and microSD card and the $529 Mini Pupper 2 Pro Basic Kit. There are also full kits that ship with a Raspberry Pi 4 or CM4, fully assembled kits, and a $299 upgrade kit for owners of the original Mini Pupper robot. Shipping adds $4.3 to $78 depending on the selected reward and destination country. Backers should expect their perks to ship in February 2023 if everything goes according to plans.

Interesting. It’s cool that they added servo feedback. I’ve been experimenting with this on our hexapod, and any time it walks on something not perfectly flat (i.e. always) it’s necessary, and helps detect bumps or even holes. I tried two different methods, pressure sensors under servo screws (totally inaccurate) and current measurement (not much accurate due to the way servos work). With digital servos that can provide position and current feedback it should be way more accurate, and seeing the number of pins on the board’s connectors above, I guess that it’s what they’re doing.

You can modify a normal servo by soldering a wire onto the middle pin of the pot, then you can read the analogue value and get the position from that. It is only about as a curate as the servo itself is and has quite a bit of backlash but it will probably do fine for your application. I am planning to use it on a hexapod I am going to build.

I’m wondering why not try quadruped. 🙂

Exactly, you are right.
But why not try quadruped? 🙂