Just like the original design, MangDang’s Mini Pupper is open-source, based on Ubuntu and ROS (Robot Operating System), and designed for robotics education in schools, homeschool families, enthusiasts and others, with notably students being able to learn out to use ROS, SLAM, navigation, and OpenCV computer vision through online courses that will come with the robot. 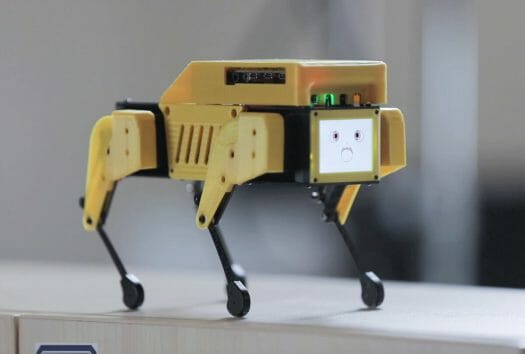 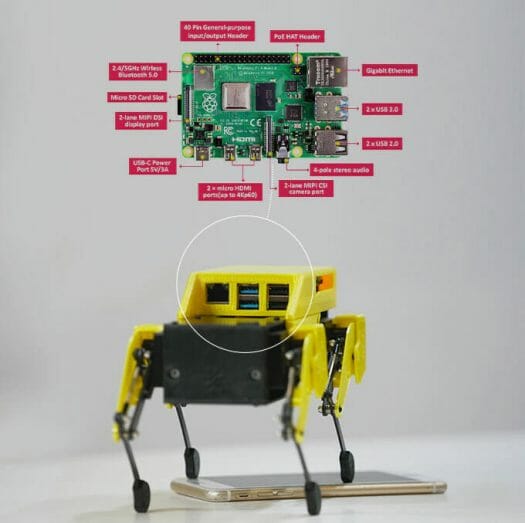 The robot is available in various kits:

The company also offers one optional accessory namely an LD06 Lidar module, and recommends OpenCV OAK-D Lite 3D camera, although a standard USB camera could do to get started without the depth function.

One fully assembled and configured, the dog-shaped quadruped robot that can hop, trot, and run around, finding its way around using SLAM, Navigation, and OpenCV AI functions. Mini Pupper’s software relies on a fork of ROS based Champ Quadrupedal Framework led by Juan Miguel Jimeno, which you can also find on Github.  ROS2 support is also in the works.

MangDang promises to publish online courses about mechanical, hardware, ROS, SLAM, navigation, AI functions, and more, although there are few details about the courseware at this time.

The Mini Pupper open-source robot has raised over $300,000 US on Kickstarter so far with about 23 days to go. Most Super Early Bird rewards are gone, so pledges start at $279 for the Research Basic Kit, and you can still get the full-assembled Mini Pupper for $564. The retail price of the complete robot will be $940. 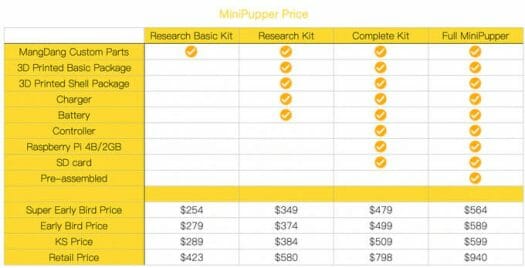 The Lidar module adds an extra $139. Shipping is $25 worldwide, and the robot appears to be ready since deliveries are scheduled to start in November right after the campaign ends.

Mini Pupper is not the first robot dog we’ve covered, and alternatives include Petoi Bittle (Arduino + Raspberry Pi) and XGO Mini Pro (Kendryte AI processor). Larger companies have also started to offer their own robots with, for instance, Xiaomi CyberDog and Amazon Astro, although the latter is more like a pet on wheels than a dog, and is designed for home monitoring, rather than education and/or reasearch.

Don’t forget pippy, spotmicroai,  and KiE which seems in libo 😐