Innodisk, better known for its embedded storage and memory chips, had announced its intention to turn to the AI market earlier and started with the launch of USB camera modules last month, but the company has gone a step (or two, or three) further with the introduction of the EXMU-X261 FPGA machine vision platform.

The EXMU-X261 is powered by an AMD Xilink Kria K26 system-on-module and features HDMI 1.4 video output, Gigabit Ethernet, four USB 3.1 Gen 1 ports for the cameras and other peripherals, as well as two M.2 sockets and a terminal block for expansion. 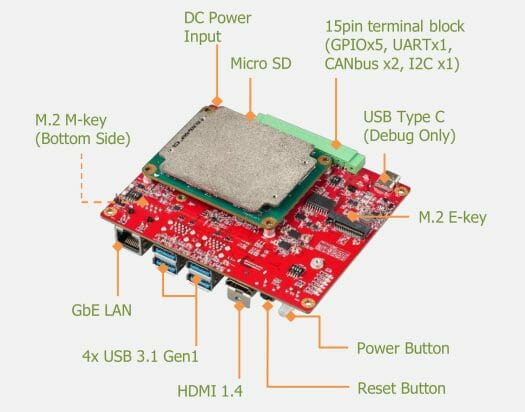 Going from designing and manufacturing storage chips to AI processing with a high-end FPGA seems like a risky proposition, but I’d assume the devkit relies on AMD Xilinx’ Ubuntu 18.04 image with Linux 5.4.0 and FPGA tools, and Innodisk mostly worked on the carrier board which appears to be a modified version of the Kria KV260 Vision AI Starter Kit, as well as the Innodisk’s AI Suite SDK with an FPGA Model Zoo, iCAP (Innodisk Cloud Administration Platform), iVIT (Innodisk Vision Intelligence Toolkit), and InnoAgent to support out-of-band (OOB) remote management.

Innodisk EXMU-X261 FPGA machine vision platform can notably be used for surveillance, industrial, and automation applications. The company especially highlights automated defect inspection that can be performed much faster with the kit compared to human inspection which typically takes an average of three seconds per item. Availability and pricing information was not disclosed. More details may be found on the product page and press release.