Some of the details about the Intel Processor N100 and N200 processors were leaked last fall, followed by the Core i3-N300 and Core i3-N305, but at least it is now official, and we have more details so let’s dig into it. 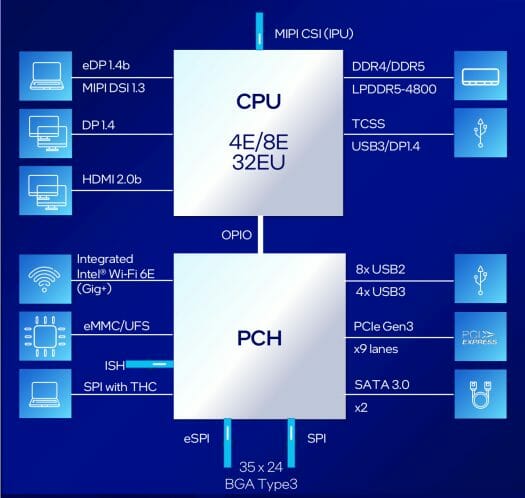 Multimedia improvements include support for 10-bit HEVC & VP9 Encode/Decode, AV1 decode, and Intel claims a 10-hour battery life for HD video playback. The highlights and differences for the four new SKUs can be found in the table below.

The Alder Lake N-Series processors are mostly designed for education and consumer products that required a lower price point. Intel has been collaborating with Acer, Dell, HP, Lenovo, and Asus on more than 50 designs that are expected to launch in 2023 with ChromeOS or Windows. Further details may be found on the product page and CES 2023 announcement. [Update: Alder Lake N-Series processors are now listed on Ark, and there are embedded SKUs namely Intel Processor N50, Processor N97, Atom x7213E, Atom x7211E, and Atom x7425. So the Pentium and Celeron brands may be dead, but the Atom brand is apparently here to stay…]

They are downplaying the CPU performance. It could be as much as triple Jasper Lake’s multi-threaded performance with good cooling. Gracemont adds support for AVX, AVX2, FMA3, and AVX-VNNI instructions.

The Intel graph suggests even more than tripled with the i3-N305’s ‘per core’ CPU performance being shown at +180% compared to N6000 (having half the cores). I doubt that since having added the ability to benchmark different cores individually a while ago with @Linuxium’s help. Gracemont vs. Tremont at same clock is below 120% difference per core.

We should treat these graphs as what they are: marketing departments at work.

They don’t explicitly mention it, but some of the benchmarks in Crossmark most likely benefit a lot from AVX2, AVX-VNNI which is where I assume most of the gains to come from.

Is it normal to have recommended customer prices for mobile socs? cause to me it suggests sockets in laptops…

Quite normal, I’m 99% those will be BGA, especially since they will be in cheaper devices.

Was already the case with at least Gemini Lake SoCs. But the numbers were (and most probably still are) complete BS since ODROID H2 based on Celeron J4105 had a retail price close to Intel’s ‘recommended’ SoC list price.

Recommended prices are just a way for a vendor to make all their resellers agree on a reasonable price for a given set of features, that allows them to preserve some margins until one of them breaks the deal. Usually they last until a next generation appears, after which resellers try hard to get rid of all their previous stock at any price.

I was shocked when Intel sullied the Pentium/Celeron brands by using them to market Atom cores. But I am gob-smacked by them sullying Intel Core™ with Atom cores. So Alder Lake i3-N is now ambiguously equivalent to Skylake i3, at least in single thread. Maybe slightly ahead of Skylake i3 for multi-thread. And honestly the efficiency isn’t a whole lot better than Coffee Lake U/H. I think this is a last ditch desperate attempt to hang onto the entry-level market, by snake-oil rebranding Atoms as i3, so their vendors can market “i3” laptops against the coming Snapdragons with consumer muscle-memory… Read more »

I’ve always found their naming extremely confusing, even at the Pentium-M era where the CPU had nothing to do with a Pentium and was faster clock-for-clock than a P4 and way more efficient. Their Celeron-M was the same core with a tiny cache and a much lower frequency. Since then, “Atom” has meant plenty of things, like the crappy N450 that powered my previous netbook and that was nothing more than a high-frequency 486, the powerful E3825 with a large heatsink that easly routes 10 Gbps and does line-rate crypto in our entry-level appliances, and the slow x5-z8350 that can… Read more »

Single channel? Throw it into the bin.

Single channel is not so much of a problem with DDR5 memory as each connected DIMM is configured with 2 smaller independent channels. So while a mult-channel processor is always going to score better on benchmarks these CPUs are going to gain quite a boost over their older DDR4-only brothers due to higher DDR5 MT/s rates and channel configuration.

DDR5 halves the size of the independent channels, so that doesn’t matter. Jasper Lake e.g. N6000 supports 2 memory channels, Alder Lake-N supports only 1 (not counting the subdivision). The roughly double overall bandwidth from higher transfer rates (e.g. DDR5-6400 instead of DDR4-3200) is negated by halving the number of channels. Maybe LPDDR5 is another story, but the memory situation sure looks like a sidegrade rather than an upgrade, at best. Could be even worse for a cheap model using DDR4. Now let’s pay $500 for it.

Even N200 with a PCI-e slot would be nice for a twin SFP+ router. Does something like that exist?

BTW: you list ‘Max Turbo Power (MTP)’ in the table above while ARK talks about TDP instead and that matches more with reality.

Thanks, I’ve updated the table. Intel uses Max Turbo Power in the product brief, but they indeed list the TDP on the product page and Ark with the same values…