The design looks very similar to another white brand fanless network appliance with six 2.5GbE ports and an Intel Gemini Lake processor that we covered last year. Besides the faster processor, the new system replaces i225-V controllers with i226-V controllers, some of the USB ports have been upgraded to “USB 3.2”, and DisplayPort output was added for dual display setups. 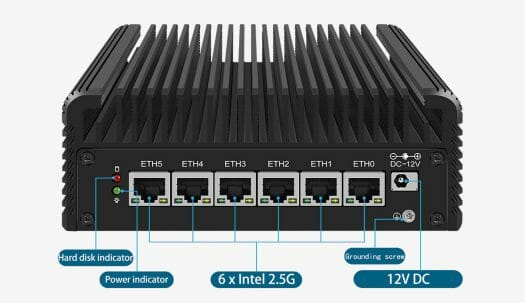 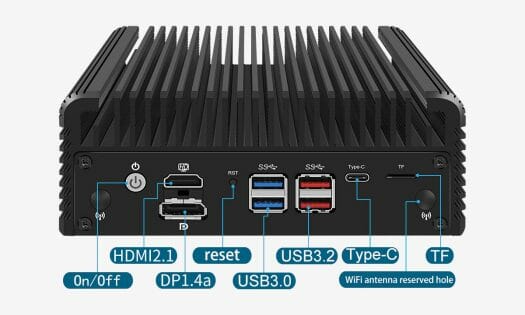 The network appliance / mini PC can also be mounted to a VESA mount through an adapter using the screw threads on the bottom plate. It is offered as a barebone model, or with RAM and NVMe SSD with Windows 11 Pro apparently preinstalled on the system. Most people will probably install other operating systems such as pfSense, OPNsense, Proxmox, and so on that are better suited to the networking capabilities of the computer.

A forum user on Chiphell tested (installed) several operating systems including Promox VE, Windows 11, and Unraid, but failed to install Esxi 8.0 on his device. He also posted various external and internal photos showing the hardware design. 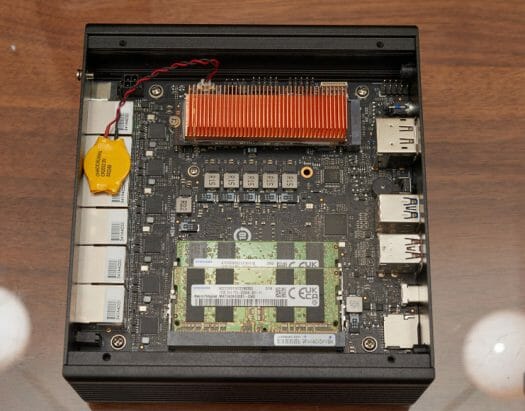 The Alder Lake network appliance is sold on Aliexpress for $369.45 and up, and you may find it from other sellers as well at the exact same price at the time of writing. The fan does not seem to be included, nor are the antennas and WiFi module so you would need to purchase those separately if needed.

It looks nice and great, but I’m having some doubts about the relevance of such an E+P CPU for network processing where you generally want something fairly balanced. If the E cores are sufficient to process most of the traffic, then the P cores are overkill as well (or needlessly inflate the price). So I don’t know well what to think about this.

…then you still need 11-12 PCIe lanes for the six i226-V and the two M.2 sockets. Intel CPUs only featuring Goldmont Plus/Tremont/Gracemont cores w/o P cores are limited to 6, 8 or now 9 PCIe lanes.

In fact it depends. Usually boards with many ports involve a PCIe bridge. In practice you only need two Gen3 lanes for six 2.5G ports. But in such small devices it’s pretty rare to find PCIe bridges.

(Not really related to this article, but could you please add a 2.5GbE news-tag?)

I’ve added one: https://www.cnx-software.com/news/2-5gbe/
I’ll try to remember to add it to new relevant articles.

I wouldn’t go for it until there is more info available about the i226v problems.
https://www.techpowerup.com/303854/psa-intel-i226-v-2-5gbe-on-raptor-lake-motherboards-has-a-connection-drop-issue-no-fix-available