The Storaxa is a multi-purpose device powered by an Intel Celeron N6005 Jasper Lake processor which works as a 5-bay SATA NAS, which also happens to take up to four NVMe SSDs, a 4K media center with HDMI and DisplayPort interfaces, and a WiFi 6 router equipped with four 2.5GbE ports.

The solution is fitted with 16GB RAM, comes with four 10 Gbps USB 3.2 ports and two USB 2.0 ports, and runs Proxmox VE to handle both TrueNAS SCALE and OpenWrt for the NAS and router functions respectively. 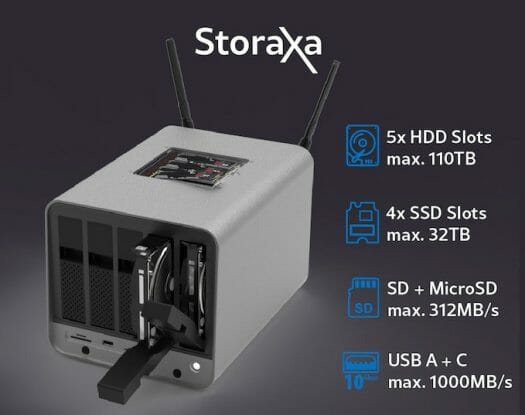 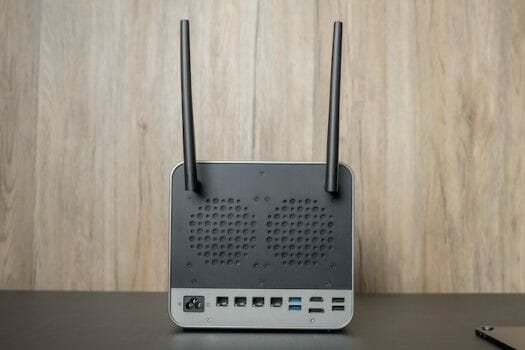 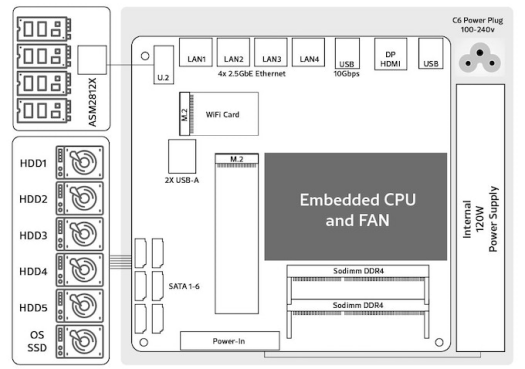 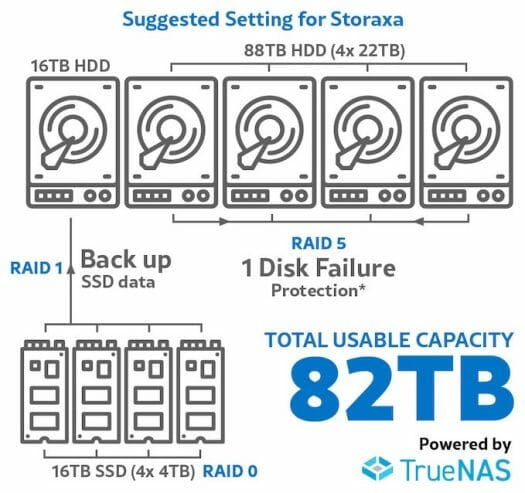 It’s unclear to me what are the advantages of having SSD drives in the Storaxa, as one of the advantages of SSD-based NAS like the QNAP TBS-464 and upcoming TBS-574X is their thin design, but it’s obviously not the case here. QNAP says the TBS-574X will also be suitable for real-time 4K video production and business IT applications, so maybe the SSDs may help here too although the Intel Celeron N6005 used in the Storaxa will not be quite as powerful as the Intel Core i3-1220P 10-core Alder Lake-P processor found in the QNAP NAS.

A Kickstarter campaign is now running for the Storaxa, and it has been fairly popular so far with over $800,000 raised from close to 2,600 backers. Two rewards are offered for the Storaxa: $239 for the Chinese New Year promotion, and $279 once CNY is over or all 240 first units are gone. Shipping adds $25 to $35 and deliveries are scheduled to start in June 2023 if everything goes according to plan.

Thanks to Mihai for the tip.

Yes, it looks like they may be using the Topton N6005 mini-ITX motherboard indeed, the board layout looks the same.

Not exactly since Storaxa claims to attach the ASM2812X PCIe switch for the four NVMe SSDs via U.2 and that’s missing on the Topton board.

Storaxa also claims the M.2 slot for the boot SSD could be switched between SATA and PCIe/NVMe and each of the i226-V would have an own PCIe lane.

Which in combination with 6 more SATA sockets sounds weird on Jasper Lake limited to 8 Gen3 PCIe lanes and 2 SATA ports.

maybe a m.2 to u.2 adapter? they’re pretty cheap

Possible. On the Topton board are two M.2 Key M slots (x1 each) and Storaxa still talks about 2 usable M.2 slots (one for Wi-Fi), the other 2280 slot capable of both NVMe and SATA.

Topton uses a JMB585 (x2 capable) controller to provide 5 SATA ports needing at least one PCIe lane. 4 lanes are occupied by the NICs so only 3 lanes left that then need to feed the ASM2812X PCIe (x4 capable) and the two M.2 slots.

or it’s a complete scam.

ocam’s razer would suggest it’s USB for the M2 E-Key and 2 lanes for the U2, that would explain the ASM2812X

Well, at least it’s obvious that this amount of storage/network connections doesn’t fit Jasper Lake’s I/O capabilities that are far too limited (and those Alder Lake offerings w/o P cores just add another PCIe lane).

Adding to this: people who play RAID with this setup are just fooled since what will they do once any component fails?

> or it’s a complete scam

Let’s wait and see. Some of the backers already asked ‘Do you just take our money and run?’ 🙂

It’s Storaxa’s 1st such campaign and their backers seem absolutely clueless about what they’re about to do: thinking of buying a product instead of realising that they’re ‘investing’ into an upcoming product/project (that is supposed to even) fail.

The user of NVMe storage is to act as a buffer for the mechanical drives. However, the hardware is most likely not potent enough in this case for it make a big difference.

In keeping with 3-2-1, copy data to the high speed SSD’s. Let that data be mirrored to the HDD, which you then EJECT and store offsite.
The big issue is this only backs up 16TB of your 66TB RAID (1 drive lost to redundancy checks). Also, some RAID 1 setups write to both drives at the same time, forcing your 16TB SSDs to be as slow as HDD in the mirror.

The one drive is not lost to ‘redundancy checks’ but to an anachronistic concept from the past when spinning rust’s capacity was measured in GB and not TB. RAID5 with 22TB spinners is terribly stupid today since rebuild times are measured in days or weeks (then w/o redundancy any more).

Especially here where the origin of the SATA ports is unknown: Jasper Lake has only 2 native SATA ports! Are SATA PMs involved? All/some ports behind a SATA HBA?

The mix of slow and fast storage let’s this system act more like a SAN than strictly a NAS. You could offer block storage mounts from the nvme to external hypervisors for performant VMs / Containers, and then offer the HDDs as NAS storage for VM guests, etc. And if all you’re asking the processor to do is digest network and storage tasks, it’s probably just enough to do it really well.

> it’s probably just enough to do it really well

That’s for the potential CPU limitations but what about the obvious I/O bottlenecks? 4 x 2.5GbE isn’t 10GbE with LACP even if 101% of the consumers backing this thing might believe otherwise.

Jasper Lake SoCs are limited to 8 Gen3 PCIe lanes and 2 SATA ports. According to Storaxa 4 PCIe lanes are gone for the NICs, the M.2 slot for the boot SSD is SATA/PCIe, how is the optional Wi-Fi card connected (PCIe again?). How are the 6 SATA ports provided?

Yep, especially ‘NICs vs. NVMe’ is weird: the NICs providing a combined 10 Gbit/sek bandwidth get 32 GT/s assigned while the SSDs ‘wanting’ 16 Gen3 lanes get a single one.

Maybe this is just a Jasper Lake bifurcation limitation and only 2 x x4 or 8 x x1 work but nothing in between?

“Proxmox VE to handle both TrueNAS SCALE and OpenWrt for the NAS and router functions respectively.” OpenWrt is the weak link here. I would use Proxmox VE’s built-in backup server for the NAS, not OpenWrt. TrueNAS SCALE is nice but is it needed? I would not run a router/firewall on OpenWrt, especially on a full-up x86 machine. Instead use Debian Linux or OpenBSD Unix running Free Range Routing (FRRouting). FRRouting replaces Quagga, Quagga replaced Zebra. For the firewall iptables/netfilter is for Linux and PF/ALTQ is in BSD there are plenty of GUI front-ends for either. Jellyfin is a FOSS light… Read more »

Simple solution
Openmediavault 6 with KVM plug-in.
Pfsense VM for router and remote access
Pi-hole docker for ad blocking
Any old pc laying around the house with 4 Sata ports minimum. A minimum of 3 nic cards.
Any wifi router configured as access point.
Built 3 for family members on 2010 generation PC hardware. Dropped in behind there internet router using IP pass through or DMZ if there was no other choices.

Why do you people insist on running Pi-hole, if you’re already running pfSense? You could just block ads and all from pfSense itself, skipping Pi-hole.

Just in time for wifi 7

Of course this will not be a CPU upgrade but a different motherboard. Though with 5800U AFAIK this will not allow to avoid the silly I/O bottlenecks the Jasper Lake base variant is plagued with since same count of PCIe lanes.

Based on Kickstarter comments majority of people sending their money don’t even get their role: thinking to buy a product instead of backing a product idea. As such you can tell them anything since they’re not getting it anyway.