The latest “STK1AW32SC” Intel Compute Stick, also called Sterling City, is powered by an Intel Atom x5-Z8300 processor with 2GB RAM and 32GB storage, and pre-loaded with Windows 10. There’s also a version with operating systems dubbed STK1A32SC, but currently only the Windows version is available on Amazon US. That doesn’t not mean you can’t try to install other operating systems on the TV stick, and that’s exactly what Ian Morrison has done with Android 4.4 & 5.1, Phoenix OS, Remix OS (alpha), Chromium OS, and Ubuntu. 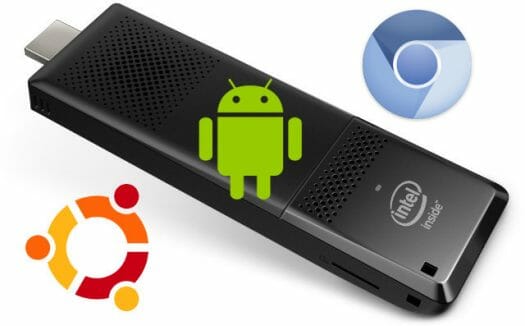 If you want to know how to install the operating systems, you can follow the instructions for Ubuntu , Chromium OS, or Android/ Remix OS/ Phoenix OS. Bear in mind that installing Android also require that you install Ubuntu first, and there are quite a lot of steps, and once you’ve installed Chromium OS, you could also run Ubuntu using Crouton. So there are many options for you to play with.

It is well know that Atom Cherry Trail processor do not support HDMI audio in Linux, since Intel is not putting resources into supporting Linux on those tablet SoCs. and the only way to get audio is to use USB sound card, which costs as low as $1 or $2, as I did on Mele PCG03 when I tested Kodi in Ubuntu 15.04. But are there other limitations? Ian sorted it out for you, and the good news is that WiFi was supported by all operating systems.

There are a few footnotes:

It’s also interested to note that YouTube maximum resolution varied a lot in Android operating systems, with Remix OS offering the best resolution with 720p. Both Chromium OS and Ubuntu could play YouTube videos at 1080p in the web browser.

He tested the performance by running Google Octane 2 benchmark in Chrome or Chromium web browser in each operating system.

It should be possible to adapt most of these instructions for other Intel Atom Cherry Trail mini PCs and TV sticks, although your mileage may vary with regards to WiFi depending on the module used.

what about Bluetooth sound???

Is this better than Amlogic S905 for HTPC purpose?

@Pepe
It depends on your requirements, and what kind of S905 box. If MINIX NEO U1 or WeTek Hub, then it’s debatable.
Also if you are going to run Linux on the Compute Stick, there will be issue (e.g. HDMI audio), unless you install one of linuxium images.