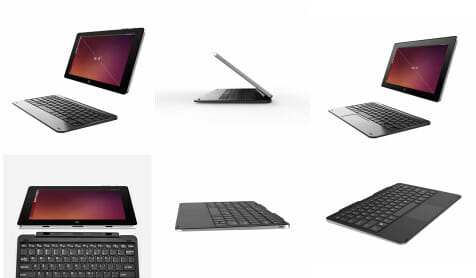 There are four models – Tanto, mini Tanto, Wakizashi, and Katana – with the following specs:

They don’t say which version of Ubuntu is running on the tablets, but it’s likely that the tablets will be upgraded to Ubuntu 16.04 once it is released next month. It’s also unclear whether the company have resolved the usual issues with HDMI Audio output on Cherry Trail processors. They also plan to offer the users option to install Elementary OS, Linux Mint, Red Hat, OpenSUSE,or Kali Linux instead.

The promo video on Indiegogo only shows just a woman talking about how great the tablet is for “you”, “the consumer”, without actually ever showing the device, so I’d recommend avoid wasting your time watching it, and instead you can have a quick look at a demo done with a prototype.

MJ Technology is aiming to raise $200,000 on Indiegogo (fixed funding) to go ahead with mass production of the tablets. Mini Tanto tablet starts at $230, while Katana goes up to $500 with a 250GB SSD. Shipping adds $15 to the US, and $35 to the rest of the world. Delivery is scheduled for August 2016. There’s been several crowdfunding failures with Linux based tablets, and the company addresses that with mentions of Jolla tablet and Ubutab in the Risks & Challenges section of the campaign, saying that they’ve already manufactured & shipped Android tablets in the past with MJ7HDTV Tablet released in October 2015.

So, pretty all issues with Ubuntu and Cherry Trail are solved? We can boot Ubuntu also on other Atom x5 devices like CX-W8 pro? I hope so! The sound is not an issue for me, it’s only important that I can boot it!

I tried 4K video output there, but at 1080p resolution it should just work as well as on Bay Trail mini PCs, minus audio, WiFi and Bluetooth, with the last two depending on your luck.

So 4GB only in the premium model. Sigh.

Out of curiosity blu, why the sigh over the 4Gb RAM capacity?

Would more be useful for a given application you use?

I simply ask because I would like to see what people are wanting in a Linux tablet.

Wonder if the HDMI output has audio?

@Steve
Most probably no audio.

Even some of Intel’s own NUCs are affected. Been that way for the last, oh, 15 month now?

Was doing some reading up on this tablet and went to look at the IndieGoGo page. I see they are now offering a dual-boot option of Ubuntu Linux / Windows 10 Home 64bit. It will come pre-installed, configured, and activated with a confirmed order for one of the tablets. I think they have to do it this way due to the MS Windows Licensing structure about installable device types. Maybe this will help spark some interest in this tablet series. I say that because I want LInux to succeed in the general public and I dislike Apple and Android both.… Read more »

@RK
Mainline won’t work, but there are some images for Bay Trail (stuck at Linux 3.16) with all features working.

$1 USD for Windows 10 Home? I think it would be OK with the version 8.9″ display and 2GB RAM, but I think you’d have to pay a complete license for anything above 9″ display or 2GB RAM.

I would disagree on this device not happening. The IndieGoGo campaign has been only going for a little over a day. I don’t see it as a failure, maybe a bit of a slow start, but word takes time to spread, even on the Net.

I think the Windows Home lincense price is so low due to MJ Technology being an OEM manufacturer and they are buying them in bulk numbers. I hope Windows Server 2016 would work. Could build a very handy portable network monitoring system when I am traveling.

Take 2 with openSUSE -> https://www.indiegogo.com/projects/first-true-linux-x86-and-x64-tablet/x/1760545#/
They have not changed much, and looks like they used the same marketing company for the video… but replaced the woman by a man… Lots of talk, no demo. On the plus side, an openSUSE developer appears in the video, and it’s been mentioned @ https://news.opensuse.org/2016/11/22/mj-technology-tablet-has-opensuse-dual-boot/