Star Cloud PCG02U is one of the rare device selling pre-loaded with Ubuntu 14.04, and MeLE, who owns Start Cloud brand, sent me one sample for review. While many Android & Windows devices can be “hacked” to run Linux distributions such as Ubuntu, Star Cloud PCG02U is the first device that I’ve ever received that’s actually shipped with Ubuntu 14.04. So it will be very interesting to find out how it performs, but today, I’ll check the device and its accessories, as well as the hardware design.

The TV stick ships  in a Ubuntu orange retail packaging with Star Cloud branding, and mention of Ubuntu and Intel. 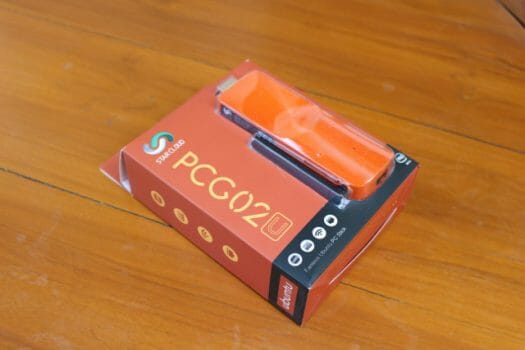 I had already published the specifications in my first post, a confirmation on the package is always good.

The TV stick ships with a 5V/2A power adapter and multi-country plug adapters, a female to female HDMI adapter, a Quick Start Guide in English, and a notice reading “Caution Hot” that warns you the thing may get hot. It’s not really reassuring, but the case is made of metal used to dissipate heat from the processor, so that’s probably why.

The stick has two levels of thickness due to the Ethernet port on one of the ends.

Other ports include an HDMI 1.4 male port, a Kensington lock, a full size USB port, a micro USB port for power only, the power button, and a micro SD slot. There’s also an external WiFi antenna. 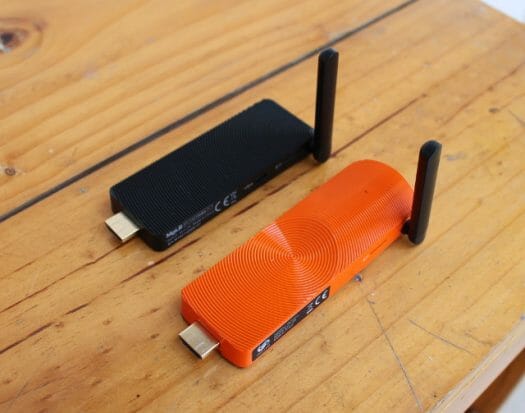 Finally, I’ve taken a picture with MeLE PCG01 TV stick to show PCG02 is both longer and thicker due to the Ethernet port.

You’ll need some sharp tool, preferably in plastic, to take out the metal cover on the bottom. 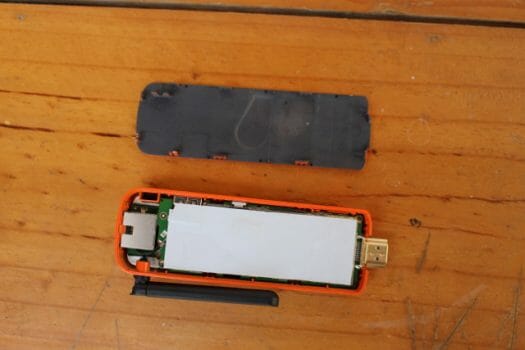 They’ve installed a thermal pad to conduct heat to the enclosure. 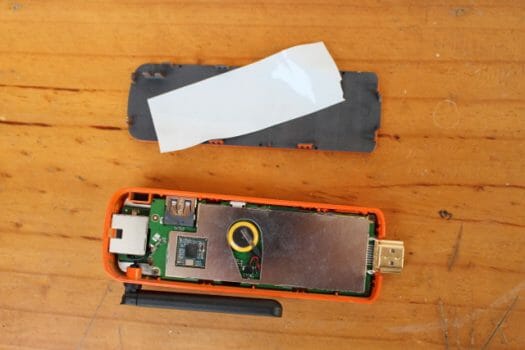 Removing it reveals Realtek RTL8723BS 802.11 b/g/n WiFi (2.4 GHz only) and Bluetooth 4.0 module, and the RTC battery seen through cuts out of a metal shield. I’m not sure Bluetooth is supported by the included driver, as MeLE did not list this feature in their specs.

After removing the shield we can see FORESEE NCEMBSF9-32GB eMMC flash (32GB), and two Samsung K4B4G1646Q-HYK0 DDR3 ram chips (2 x 512 MB). The next step is to loosen the three screws to take out the mainboard from the case. Be careful not to damage the Wifi antenna wire, or the wires connected to the Ethernet daughter board during this step. 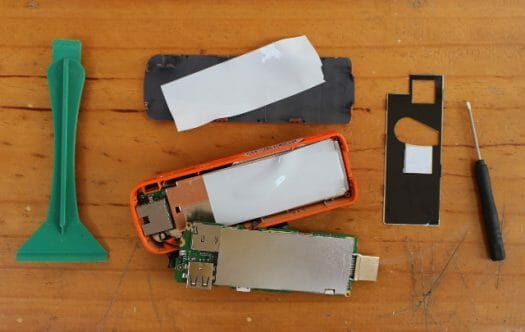 There’s also a metal shield on that part of the PCB, and more thermal pads and various metal plates for cooling the fanless stick. Three or four bit of the shield go through the board, and a folded to open it in place. So first I had to straightnen out those, and I could remove the shield.

One that side, we’ve got Intel Atom Z3735F Bay Trail processor,  two more Samsung RAM chip that brings the total to 2GB, and AXP288D PMIC. I’ve finally removed one more bock with a metal sheet, a metal plate, and a thermal pad to uncover the Ethernet “daughter board”.

Ethernet is implemented with AXIS AX8872CLF USB 2.0 to Fast Ethernet controller, M-TEK H16107SEG 10/100M Ethernet transformer, as well as what should an EEPROM to store the MAC address. One more thermal pad and metal sheet have been installed to make sure the device cools properly. At least, they’ve made some serious efforts working on the thermal design, but we’ll have to see how well it works.

I’d like to Thanks MeLE for sending Star Cloud PCG02U Bay Trail Ubuntu TV stick for review, and if you are interested you can purchase it on Aliexpress for $69.74 including shipping. Please note that MeLE PCG02U will not ship to North America (US, Canada, Mexico), as distribution will be handled by a yet-to-be disclosed third party.

“ok, lets bring a intel tv stick which is way cheaper due to lack of a windows license!”
“but, wont customers put a pirated onto it, cannibalising our product with real w10?”

“…we will just make the case freaking neon-orange.”

Looks like thermal design is ok (to this non-engineer), not too pricey, comes with Linux. Hope this is first of many!

@TC
I already ordered one piece. I apreciate this product a lot, because I always wanted a Linux only stick, without paying unneded Windows license. Why to pay at least 25USD more for something I will not use? And also I hope, that there will work everything under Linux – including WiFi, GPU acceleration, HDMI sound etc. I am looking for your next review of this stick.

@onebir
Yes! I hope, that there will be much more simmilar product with native Linux.

@Tomas Morkus
🙂 So this 4GB/128GB USB3.0 one should be ~$100 in Linux-only:
https://www.chinavasion.com/china/wholesale/Android-TV-Box-Stick/Windows-Mini-PC-TV-Boxes/Morefine-M1s-Mini-Pocket-PC/

@onebir
Yes, it should be about $90, if it contained Windows license (costs about $25), what would be great offer 🙂
But it does not contain any license, there is only “trial” version, aka pirated version 😉 Much better would be to offer it with full Linux support, say Ubuntu 16.04 with all hardware working and officialy supported.

Thank you for the breakdown and am looking forward to your review.

I have ordered one and am interested if there is a cec driver or if libcec be loaded loaded and cec-client used on it.

I’ve just received mine, and I’m unable to find the password for the default user “pp”

@MoiMeme
I have not used it much at all yet, only booted it once and no password required. But I now can see that’s a problem when wanting to use sudo… I’ll ask MeLE.

I hope it help someone 😉 Have a nice day.