The company has sent me a sample for evaluation, so as usual, I’ll first have a look at the hardware in the first part of the review, before reporting my experience with the mini PC in a few weeks.

The company has done away with the black and green package for their Android TV boxes and Windows mini PC, and instead went with a purple and (Ubuntu) orange package.

I already wrote the specifications in the announcement post, but here they are again on the back of the package. 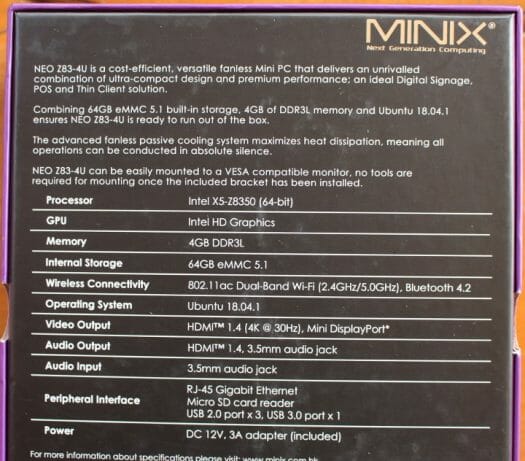 The main difference, in terms of terms, against MINIX NEO Z83-4 Pro (Windows 10 Pro) mini PC is that the storage has been upgraded to 64GB flash since we don’t need to bother with Windows retail license terms here which limits the capacity to 32GB for discounted licenses.

The content of the package is mostly the same as the one I got with MINIX NEO Z83-4 Pro mini PC, except a different 12V/3A power supply is provided together with EU, US, and UK plug adapter. I had only received a EU cord with the Windows 10 Pro mini PC. Other items include a WiFi antenna, a VESA mount, an HDMI cable, a user manual in English and German, and a product brochure. 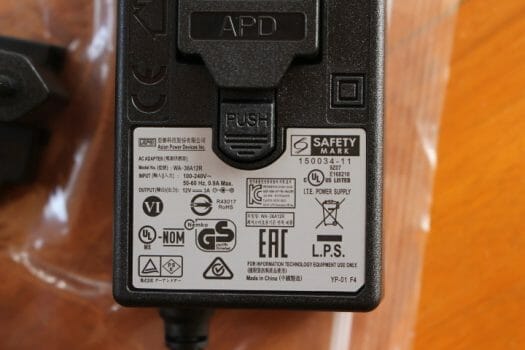 Unsurprisingly, the company re-used NEO Z83-4 (Pro) enclosure and the mini PCs look exactly the same from the outside with the power button, a micro SD slot, four USB ports on one side, a 3.5mm audio jack, a mini DP port, an HDMI port, a Gigabit Ethenet, and power jack on the back, and the WiFi antenna connector, reset pinhole, and Kensington lock on the other side. 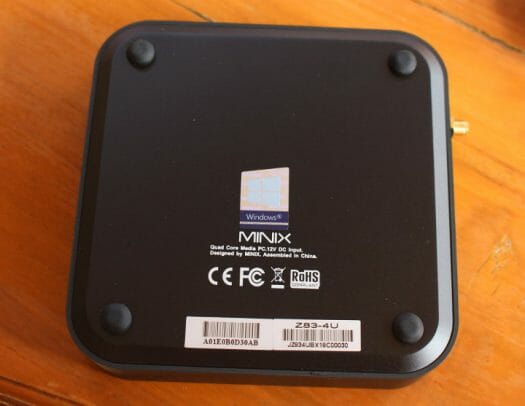 The method to open the case if the same as usual, remove the four rubber pads, loosen the four screws, and the bottom cover should come easily. One oddity is the Windows “Genuine” sticker on the cover, which should definitely not be needed for an Ubuntu mini PC :), and the company confirmed this was indeed a mistake in the initial production batch.

MINIX seems to have taken good care of the thermal design again with a large heatsink completely with a blue thermal pad stick to the bottom cover.  For reference, I’ve included MINIX NEO Z83-4 Pro teardown photo below, and as you can see it’s exactly the same as far as I can tell.

The board sticker is now NEO Z83-4 8CXB-C8B02-220 instead of NEO Z83-4 8JXB-C7704-330, but I’ve not sure what those mean exactly. The only real difference will be the 64GB flash that replaces the 32GB flash in the Windows model. For reference, I already did some stress testing on NEO Z83-4 Pro using Aida64 Extreme for 2 hours and temperature never exceeded 69°C in a room whose ambient temperature was just under 30° C. I’d expect the Ubuntu mini PC to perform just as well under load, but I’ll confirm it again in the second part of the review.

The review will likely be slightly different than usual, as an Intel Cherry Trail processor is not the best option for an entry-level desktop machine for 2019, and MINIX does not promote it as such, instead recommending it for commercial applications such as digital signage, PoS (point-of-sale) and thin client solution. So after testing main features work, stress testing the mini PC, I may try to install a Linux based open source digital signage application and run it around the clock for a few days for evaluation. I used to play with Xibo digital signage client (and server) several years back, but they eventually gave up on the Linux client, until of the middle of last year that is, and now they have an alpha client, so it may be a good opportunity to give it another try, unless somebody proposes an alternative.

MINIX NEO Z83-4U will officially launch on March 4, 2019, but the first batch has already mass-produced and limited quantities are being sold on GeekBuying and Aliexpress for $178.10 and up. Please note there’s also a 2GB RAM version called MINIX NEO Z83-2U that sells for under $165 including shipping.

I think this could be a decent media-center and I’d like to see some related tests in the second part review, thanks.