When Xiaomi AIoT router AX3600 launched in April for around $135, we noted that while it was the most affordable WiFi 6 router we’d seen so far, the other 802.11ax WiFi 6 routers had also come down in price significantly.

But now the company has come up with a really inexpensive router: Xiaomi Mi Router AX1800 which I first discovered on Gearbest for just $67.50, but also available on Aliexpress for about $60 shipped. If you are in China, you should be able to get it for 329 RMB (around $46). 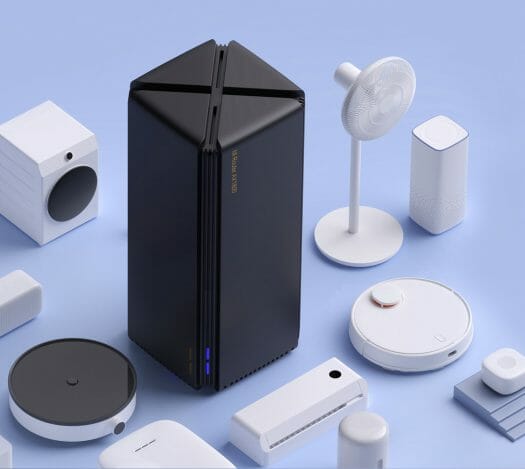 Just like other Mi routers, Xiaomi Mi Router AX1800 runs MiWiFi operating system based on OpenWrt and can be managed via the router web admin interface,  and/or Android/iOS MiWiFi mobile apps. The router ships with a user manual, an Ethernet cable, and the power supply.

But why making a WiFi 6 “AX” router with speeds that can be obtained from WiFi 5 “AC” routers launched 6 years ago? That’s because, besides the theoretically faster transfer rate, 802.11ax also performs better in high-density environments thanks to 1024QAM OFDM modulation support, and potentially lower power consumption of connected devices thanks to TWT (Target Wake Time), although I’m not sure the latter is supported in Xiaomi router.

Can users still trust the brand?

” Xiaomi smartphones reportedly tracking privacy web usage and phone usage for millions of users.
A seasoned security researcher found disturbing amounts of usage being tracked and data being harvested that could reveal individual identities.
While only the Redmi Note 8 was caught red-handed harvesting user data, firmware for the new Mi 10, Redmi K20, and the MI Mix 3 also had the same browser code, proving the expensive flagships aren’t quite innocent either. “

In my opinion no more as much as before, I won’t buy another phone after my A2 (+3 Redmi Note7 in the family) for the following reasons: A2 is a Google one handset, with gigantic SW problems. I’m stuck with march android 10, burning energy and lagging. Yesterday even all audio failed until a proper shutdown and start (reboot didn’t help). showing large sw q problems. MIUI is not to my taste Apps spying and showing ads throughout is not what I buy a handset for, neither do I feel like finding and following de-ading guides before using a phone.… Read more »

@CNX is there anything I could do to get out of the moderation queue after reverting my nickname back to the current one?

I’m not quite sure why all your comments are moderated. That’s not the usual behavior.
Do you mean you are using the same email as before but changed the nickname? If so, I’ll try to have a look.

Exactly I once by mistake changed it when I got my new phone, then it needed moderation once and after it was normal again. Now I decided to go back to the original Nick with same mail, but now im stuck with moderation queue.

One thing comes to mind – two quotes in his nickname. Might be a bug.

> Can users still trust the brand?

No. You can’t trust brands, companies or even people. They’re not immutable. You can somewhat trust open source when there’s enough third parties reviewing the code like upstream openwrt or lineageos. So, wait until it’s supported by upstream openwrt and flash it.

The best would have been to use the gain in efficiency for a better concurrency scheme. Either make the standard channel narrower, so that no channels overlap and then start bonding channels intelligently, or use the whole band at once and do clever OFDMA. Again a lost opportunity… Now here we have the stupid situation that all network providers preset 1/6/11 so you loose 13 if they would preset 1/5/9 they wouldn’t loose anything and those who know what they are doing can set their router to 13, which not all clients will use thanks to manufacturers not knowing of… Read more »

Btw. talking about the standard 802.11ax not this specific device 🙂

You may not be aware that the 802.11ax standard dues use OFDMA. Even 802.11ac had support for a more basic configuration with far fewer channels to allocate from.

What i mean is to get rid of the problematic of the overlapping channels ruining throughputs of whole neighbourhoods. Not OFDMA within one SSID. But whatever we won’t solve this here in this comments section 🙂

128MB eMMC? Not every like, eMMC doesn’t come in that small sizes, so that’s either GB, which is also unlikely, or simply some plain old flash memory.

Can this be found for sale for shipping within in the EU (European Union)?

For custom and impost fees reasons.

No. Europeans are rich people.

what about the cpu of the ax3000 compared to this xiaomi?