LilyGO has launched yet another ESP32 WiFi & Bluetooth IoT board. As its name implies, TTGO-T-PCIe board includes a mini PCIe socket that coupled with a SIM card socket allowing users to insert a 4G LTE mPCIe card to add cellular connectivity.

The company also offers optional SIM7000 2G or SIM7600 4G LTE modems that come with LTE and GPS antennas. (Finally most probably not) 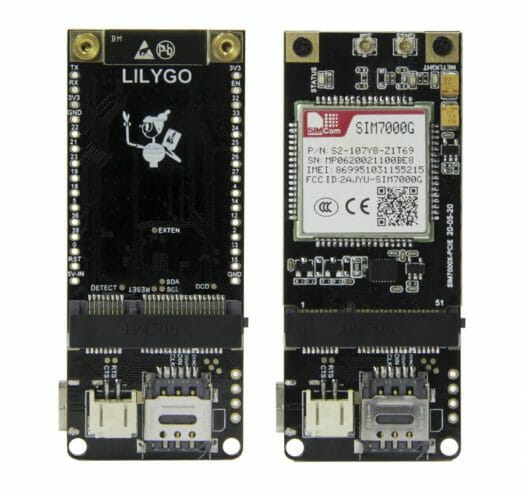 The four optional SIMCom mPCIe cards offered by the company:

Arduino and Platformio samples based on TinyGSM library, as well as schematics and datasheets, can be found on Github.

LilyGO TTO-T-PCIE board is sold on Aliexpress for $8.66 shipped with headers and battery wires. The wireless cards listed above can be found on the same link for $25.20 for the 2G mPCIE card, and $35.49 for the 4G cards. The recently-launched Rockchip RM310 4G LTE mini PCIe card ($16 plus shipping) might be an interesting add-on provided it’s electrically compatible [update: very likely not compatible] and gets a port to Arduino’s TinyGSM library.

I’m really curious to understand how this is supposed to work. The mPCIe modems have USB interfaces, but the ESP32 doesn’t. According to the example projects on the GitHub repo, the connection from the ESP32 to the modem is via UART. But mPCIe doesn’t specify UART signals on the connector (https://pinoutguide.com/Slots/mini_pcie_pinout.shtml). So it seems that maybe some of the reserved pins are being reused for this, but if that is non-standard, how likely is it that the mPCIe modem that you choose will be wired appropriately?

Good point that’s probably proprietary and other cards won’t work. Somehow I was thinking about the USB OTG port inside ESP32-S2, but there’s none here. I can see USB on the mini PCIe connector, but it looks it can only be accessed by a host via the 4-pin USB header on the board. So it looks to be usable as an external USB modem using the 4-pin USB header.


Not exactly sure how this works, but the UART pins may initially be disabled and then the host does something to turn them on. That would stop them from conflicting with PCIE signals. For a real PCIE socket you’d use the USB signals and leave the UART disabled. The host would only instruct the module to turn on UART mode if the host knows it is safe to do so.

SIM7000 is a Linux device with lots of memory, CPU and I/Os, including audio! Why would anyone cripple it by connecting to a ESP32?