Five or six years ago we started to see Android TV boxes with a built-in camera meant to be placed on the top of TVs, and used with Skype to Google Hangout for video calls, besides the usual video streaming features of TV boxes.

The concept never really took off, as few people were interested in making video calls via a big screen TV. But with the lockdowns in the last year, there may be renewed demand as more people are stuck at home, and MECOOL Now, a Google certified video calling & media streaming device aims to fill that void, and it can also be used for business needs, for example in a conference room when connected to a video projector. 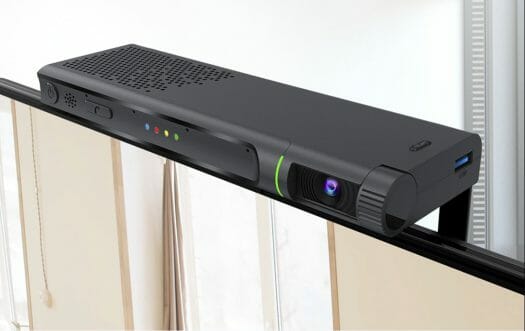 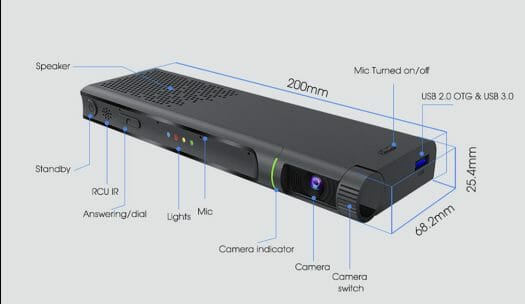 MECOOL Now runs the official Android 10 on Android TV meaning it’s certified by Google and will be able to work with Google Assistant as well as most streaming services including Youtube, Amazon Prime Video, and Google Play Movies & TV. But it also adds the ability to make video calls on the big screen using the Google Duo app, or create short videos for Tiktok thanks to the built-in camera.

The Android TV box is not only designed to be placed on top of a TV, as the company added a thread for tripod installing as well. It’s possible to control the device with the built-in buttons, the provided Bluetooth voice remote control or a remote mobile app. 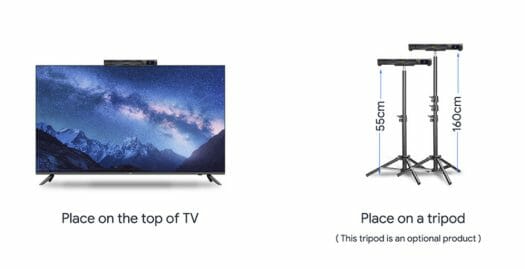 MECOOL Now is up for sale for $143.99 on MECOOL Store, but it’s also available for a cheaper price on Aliexpress.

@CNX, why are cheap USB webcams for Android TV box’s not available?

USB webcams can work too, but there’s no guarantee since most companies will not test it and make sure it works since it’s a niche use case. When I reviewed TV boxes with USB webcams several years ago there were often problems. I don’t know the status now, maybe things have improved.

Given that a TV is usualy farther away from the viewer, what is missing here is a zoom lens.
I also use my TV for video conferencing via a MiniPC connected on HDMI, but what makes the experience confortable is the attached 10x optical zoom PTZ camera and the wireless speaker phone.

It’s very fun (and probably scary) to see that it took a few decades to switch from “big brother is watching you” to “let’s install the monitoring camera ourselves in the living room” so that we can be spied over and racketed.

the pro-fear attitude tires me. these are capabilities. blaming the capabilities, to connect, to communicate, on the bad software some of us allow ourselves & each other to use is more than regrettable. it’s a distracting avoidance of how cool stuff is, & how much better we need to be doing for ourselves, embracing & making these capabilities ours. it’s cheap & easy to blame the tools, & in this case, humanity must better craft it’s uses.

Maybe that’s because you never hard to deal with computer intrusions and their consequences. Here it’s simple, in 6 months remote exploits for this stuff will start circulating and kids will harrass each other over social networks after having taped them touching in front of TV. I’m fine with using technology, but I will not grant it more trust than it deserves because at one end of the chain there’s a vendor who knows that time-to-market is key and that vulnerability fixes have never increased sales, quite the opposite.

none the less, very excited to have a camera-onboard cased sbc. and amlogic chips have gotten good upstream support, so this could be a really interesting, useful platform.

I have been waiting for a nice product like this since the Logitech TV Cam HD (for Skype) was retired – they just switched off the servers 🙁 Having a cheaper solution is always possible (TV-Box plus WebCam), but for me the full package makes the deal. Have an indicator for incoming calls (speaker and light, even though the TV is still off), having a single button to accept a call. Having hardware switches for cam and mic is a great security feature. And full Android will enable other video conference tools to be used. So my only question left… Read more »

Banggood has it available for less than 100 Euro.