I’ve already written articles such as the “Best Android TV boxes in 2018” to help people select a TV box that matches their requirements, but today it will be a little different.

GearBest provides a speadsheet with discount and coupons to bloggers and YouTube reviewers ( link here), and this time I noticed they also list the top 10 best sellers in the TV box category. 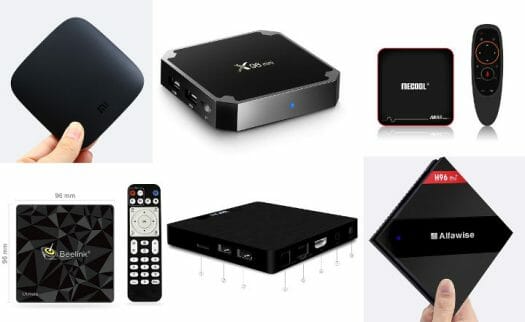 Those may not necessarily the best TV boxes, but at least many other people bought them, and you may get unofficial support via communities such as Freaktab or LibreELEC.

Withoutany further delay, here’s the list in no particular order and with prices for reference only as listed in the spreadsheet:

Just a few comments. First, it’s clearly Amlogic territory, and Rockchip based TV boxes did not make it to the list. Some models appears to be listed twice, but they have different memory or/and storage. Most models run Android 7.1 OS, but a few do run unofficial or official Android TV OS.  I may update the list in a few months or next year as it evolves.

I think that may be true for retail models, but I understand there are several official Android TV OEM models. For example some TV boxes from Geniatech: https://www.cnx-software.com/2017/12/01/geniatech-atv495-max-tv-box-gets-googles-android-tv-approval/

Mecool M8S Pro W listed here is unofficial (not licensed). Mecool is brand of VideoStrong (which licensed one of their boards) but keep in mind that S905W SoC is not licensed by Google to run Android TV. Only S905X is (for now). Geniatech will go to mass production with their ATV boxes soon (if they did not already). And difference between licensed and unlicensed ATV is pretty much obvious when you compare prices 🙂

So where are Amlogic boxes made?

Question: Last time in the 2017/2018 Android Box article you mentioned dual Android+ OpenWrt/Debian boxes. How is the dual installation done?

I found this article, but are there other methods with pros/cons, any links?

What RAM/flash mem do we need in the minimum?

It’s been possible to run a chroot in Android for a while. https://www.cnx-software.com/2012/12/13/running-ubuntu-in-android-with-odroid-x-development-board/

There are commercial solutions too: https://www.cnx-software.com/2014/07/20/volkspc-mini-pc-runs-debian-and-android-simultaneously-thanks-to-microxwin-framework/

The free solutions often do not support hardware acceleration. Recent boxes with dual OS firmware normally use a single kernel and two rootfs, likely with once chroot. I’m not sure of the details. Memory/storage requirements will depend on the apps / Linux OS you elect to run, but I think 2GB RAM should be the minimum.

Hi does any of this Android box support Alexa? The Amazon cube TV is underpowered with oudated hardware so am looking for an alternative.

Not sure about Alexa support, but If I’ve read the reports right, Amazon Cube TV is based on Amlogic S905Z with 2GB RAM, so you’d get similar performance with any of the TV boxes listed above.

As I expected (and wrote here at cnx), a new mi box is coming soon.

My guess is that it would feature s905X2 and Android P TV edition.

ROFL, it will be virtually the same Specs internally with a BT Voice remote with more buttons.

If the specs would be the same, why make a new model? Just for the remote?
And s905X2 should be available very soon, so it would be pity if it wouldn’t be utilized in the upcoming mi box!