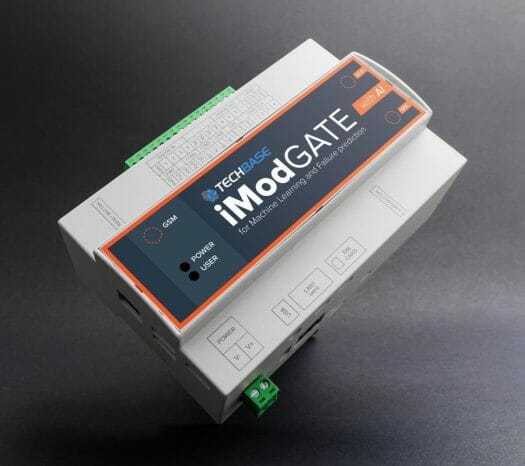 iModGATE-AI relies on the same custom motherboard found in ModBerry 500-CM4 gateway, but the AI gateway is designed to work as an AI-aided environment monitor using sensors, such as tensiometric beams, connected via the analog inputs.

Most of the predictive maintenance is offloaded from the Raspberry Pi CM4 module with the motion tracking module including a DMP (Digital
Motion Processor) to offload traffic processing algorithm calculations used to monitor shocks and vibrations, while the Coral Edge TPU module uses machine learning for computer vision and failure prediction. Applications for the system include HVAC, wind farm monitoring,  Smart Building & Cities, conveyor systems, robotics, and more. It’s currently being used by at least one of Techbase’s customers in a solution that monitors container ships.

We’ve been told iModgate-AI is available for purchase on iiot-shop.com, but there’s no pricing so you may have to chat with your requirements if you are interested. The company also highlights that “due to
pandemic and global electronics market shortages the availability is dependent on supply of Raspberry Pi Compute Modules, Coral from Google, 9-axis module and optional wireless modems”