Banana Pi BPI-W3 is yet another upcoming Rockchip RK3588 SBC but with a different set of features, notably the presence of two Gigabit Ethernet ports, a PCIe x4 slot, and a SATA port, besides to more common dual HDMI output, HDMI input, USB 2.0/3.0 ports, etc…

The board layout is somewhat similar to the company’s BPI-RK3588 SBC but with a system-on-module, and instead, the Rockchip RK3588 processor is soldered directly onto the board together with 8GB LPDDR4, and 32GB eMMC flash. 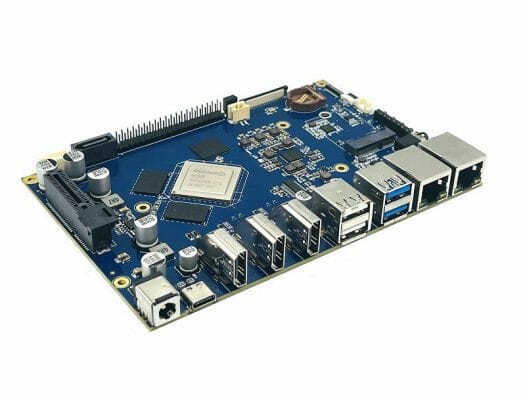 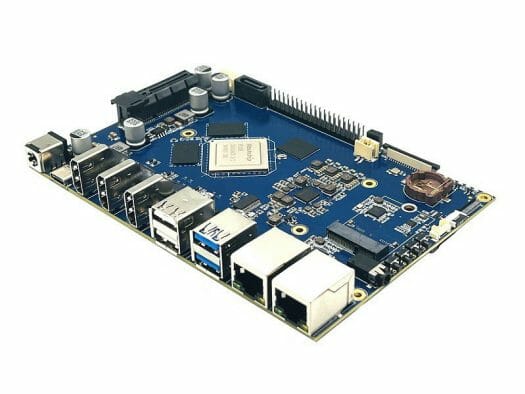 I can also see other connectors that could be for MIPI CSI or DSI, and others, but it’s not documented, so hard to say for sure. Banana Pi says “OpenWrt, Android 12, and Linux” will be supported. The Banana Pi BPI-W3 should eventually sell on Aliexpress, but right now, the company asks potential customers to contact them if interested. I doubt the board is ready, as the Wiki is light on details with no schematics, no Android or Linux images, and I even had to derive parts of the specifications from the board’s photos.

Never been a fan of Banana Pi, but do like the layout.

Basically my dream Nas/Kodi system. Let’s hope they actually care for the Linux distro.. I wonder where the SATA power connector is located… Is that the one in front of the pcie connector? Seems like a bad choos choice.. is pcie and SATA muxed?

They have a discussion thread on their forum. You might find answers there.

The power connector is on the left of the SATA port.
The capacitor in front of the x4 slot is going to be an issue though.