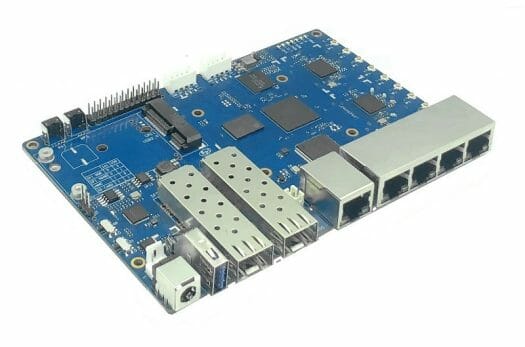 Banana Pi says the board can be used as an “internet service router”, a wireless router, a repeater, a home security gateway, an home automation gateway, a NAS device (using an M.2 to 5x SATA adapter), as well as other network and communication applications. Banana PI provides an OpenWrt 21.02 image with Linux 5.4 for the board which you can find, together with the source code and other technical information, on the wiki.

Besides the OpenWrt image provided by Banana Pi, the BPI-R3 board has also very recently been added to mainline OpenWrt as noted in the comments section.

You’ll also notice an SFP to RJ45 adapter in the thumbnail or video above. Note while there are many of those available online, they may not all work as expected, and the ones most likely to work can be pricey (around $500). The good news is that Banana Pi BPI-R3 apparently works with a cheaper SFP to RJ45 adapter sold for under $30 on Aliexpress.

Banana Pi BPI-R3 board can be purchased for $94 on Aliexpress. Additional information may be found on the product page.

[Updated: The post was initially published on March 21, 2022, and updated following the launch on Aliexpress]

Not sure why they’ve made the two 2.5G on SFP. One could be understandable for fiber modules, but that complicates the connection of the second one to the LAN. Also 2.5G modules are not that common and are at least as expensive if not more than 10/25G ones.

I am pretty sure the MT7531AE only has 5x gigabit PHY integrated, the extra two ports are intended to be SFP. I’m not even sure if they support SGMII, but SGMII PHYs were relatively expensive compared to RGMII or GMII last time I checked, so it’s probably just cost reduction by avoiding having the extra RJ45s.

Could be, indeed. SFP cages are very inexpensive so that could be an explanation.

The main SoC has a pair of HSGMII MAC interfaces. The matching PHY’s are less than $2 each, guaranteed.

Who feels like playing early adopter for a new board that (1) is by Sinovoip and (2) is based on a Mediatek SoC and (3) has – and will likely have for quite a while – a driver support and documentation up to the “standard” for either (1) or (2), let alone a constellation like this here combining both? I mean, on a purely empirical level: what could possibly go wrong eh?

If anyone does, please post a link to the video of your experience (including install,config,tests) here in the comments.

Its not a mobile soc, it’s coming from the networking group (ex ralink) those SOCs are usually better supported via openwrt, but obviously not yet now…

The rest about bananaware sounds reasonable 😸

This would be perfect if they added some SFP28 ports. Optics are finally affordable but there’s not reasonably priced hardware to use them with

This looks like it’s based on the feature reduced MT7986B, not the MT7986A, as it had native SATA support, plus ADC, RTC and IR support.

The R3 should be considered an upgrade to the BananaPi R64, which is based on MT7622 (2x Cortex-A53) rather than being an upgrade for the BananaPi R2 (which btw. is not based on MT7621 dual-core MIPS1004Kc, but rather based on MT7623, a quad-core Cortex-A7 SoC stuck somehow half-way between a smartphone and a router).
@Jean-Luc Aufranc (CNXSoft) maybe want to fix the first sentence in this article.

Openwrt has added support for the board 5 days ago in master repo[1], snapshot firmware[2] available too.

Is it tested with mikrotik os?

How would that work?