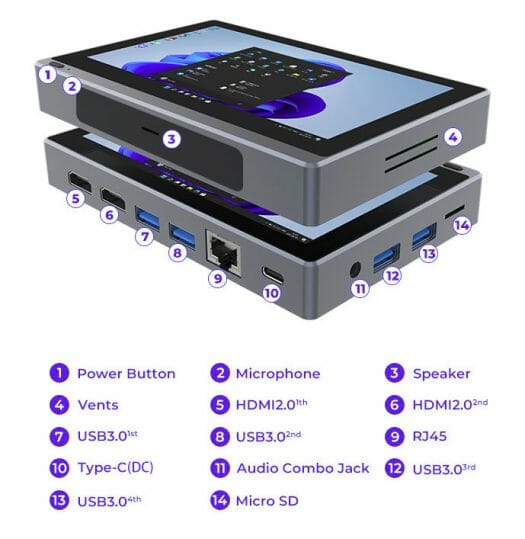 While the original GOLE1 would support Android 5.1 and Windows 10, the new GOLE1 only ships with Windows 11 Pro operating system, and Android has been dropped. Ubuntu and Linux are also listed as supported, although it’s unclear whether the company has tested them. It seems 12V-only power adapters with a USB-C port are now definitely among us, so the times when we could innocently plug any USB-C power adapter are over and done 🙂

HIGOLE launched the product on Indiegogo with a lowly ~$2,550 US funding goal. Rewards start at $199 for the early bird GOLE1 Pro with N4000, and $229 for the model with J4215 both with Windows 11 Pro preinstalled. Shipping adds about $20 worldwide and deliveries are expected for September 2022.

I’ve noticed Acer XC desktops with the J4125 have been dropping for $88 lately:

Potentially worth it for somebody, but I want to see newer Atom chips hit the bargain bin, and the arrival of the 8-core.

It seems 12V-only power adapters with a USB-C port are now definitely among us, so the times when we could innocently plug any USB-C power adapter are over and done 🙂

You talked about this on a different news post. What’s happening? Stuff blowing up?

Yes, if somebody use a 12V non-compliant USB-C power supply into a 5V USB Type-C device it will fry it. I’m not sure what happens if one plug that same 12V power adapter into a USB-PD compliant plug though.

That’s not how USB-C works. Whenever you plug a USB cable into a computer or device, the devices at either end of the cable handshake and ask each other what protocols are supported by each other. They then negotiate what role each will play to each other. Eg in the case of my portable monitor and laptop, my monitor tells my pc it supports 12V but can handle 15V (if 12V isn’t available from the laptop) then the monitor tells the pc it is a USB hub, and that it is a 4K monitor. The laptop then acknowledges what it… Read more »

And while standards compliant devices with an USB-C port should have overvoltage protection I doubt that every device I own supposed to be powered by ‘dumb’ 5V USB-C chargers or A-to-C adapter cables does implement this.

not Cool!, putting a hot girl on the video front and then having a weirdo guy who can hardly speak english doing the talking :p

( pd negotiation difficulties will get even more attention with USB4, being subdefinitions to Thunderbolt and possibly compliant, and 3.2/4.0 hubs and maybe cables/plugs not always treated like within best assumptions for protocol/standards definitions? How many customers know about hardcoded power limitations through cable resistances/wire dimensioning and resistances used on data lines? There are only few to none (cheap) USB-C hubs to USB-C devices (~100W each?) available, yes towards combined USB-A, net, HDMI/DP and storage SDHX, but with only <100W combined? )

Well, I thought both blog post and previous comments dealt with a clear violation of USB-C specs: using the connector as dumb 12V power source.

12V steady from device(s) might occur in future maybe with unforeseen configurations and adapter combinations (available, but maybe not compliant in all, but some, situations _ suppliers even might describe, but customers on their situation could misunderstand. Not a best situation for a universal SB port with up to 100(-240)W power delivery on maybe wrong voltages ( above 15V even intermediate voltages are possible https://www.usb.org/usb-charger-pd )
me, not convinced for all purpose usages (?)
( and maybe we see more like this example but with voltage control display instead of Wattage: https://www.amazon.com/Cable-Essager-6-6ft-Charging-Display/dp/B09RZQRY95/ref=sr_1_6?keywords=MCDODO%2BUSB%2BC%2BCable&qid=1658923041&sr=8-6&th=1 )

Everyone talking about USB power supplies and I’m just here loling at the 3 hours of battery life.