UP Squared 2 is a compact single board computer powered by either an Intel Celeron N6210 or Pentium J6426 “Elkhart Lake” processor with up to 16GB RAM, 64GB eMMC flash, 4K capable HDMI and DisplayPort video outputs, two Gigabit Ethernet ports, and more.

Slightly smaller than two business cards, the UP Squared 2 is an upgrade of the UP Squared SBC introduced in 2016 with Intel Celeron N3350 or Pentium N4200 “Apollo Lake” processor. The new board offers virtually the same features, except the two HDMI ports, have been replaced by one HDMI port, and one DisplayPort connector, the mini PCIe slot is gone in favor of an M.2 NVMe socket, the Altera FPGA has been removed, and the new system provides overall better specifications in terms of CPU/GPU performance. 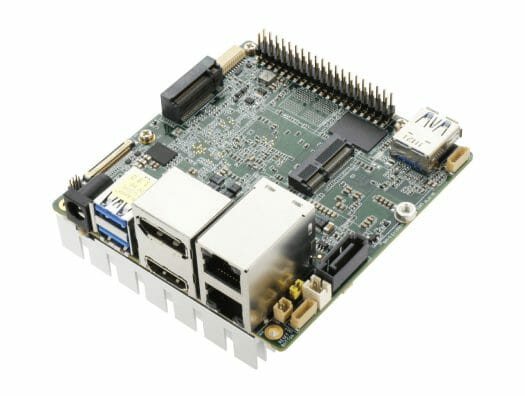 AAEON says the UP Squared 2 supports Microsoft Windows 10, Windows IoT Core, and Linux (Ubuntu, Yocto). It is designed for fanless operating with a large heatsink placed underneath the board, and the company promises long-term support with supplies available until 2035. The documentation and instructions will basically be the same as for the original UP Squared since the layout and ports are mostly identical.

AAEON is taking pre-orders for the UP Square 2 starting at $161 for the model with a Celeron N6210, 2GB RAM, 32GB eMMC flash, and going up to $323 with a Pentium J6426 CPU, 64GB eMMC flash, and 16GB RAM. The power supply, a WiFI module, and a 256GB M.2 SSD are offered as options at extra cost. A complete mini PC with enclosure, named UP Square 2 Edge, is also in the works, but no additional information is available at the time of writing. You can also check out the product page for more details.

What don’t you understand, why they didn’t include at least an HDMI 2.0 port? I guess you’d have to ask them. Gen11 graphics should not be the problem.

It could also have been a copy/paste gone wrong.

Who wants to run a display at 30 Hz? Nobody.

FPS does not imply games. Some people would like to use a 4K monitor for sharper text.

Could be interesting for some use cases.

The price calculator on their site doesn’t work, it always shows the same price for all models, you need to click “add to cart” and check the price there. While entry level models are affordable, these quickly reach the price of a NUC when you add RAM.