A TDP (Thermal Design Power) value in Watts will usually be provided for Intel and AMD processors to help manufacturers design an appropriate thermal solution for a given processor, and it’s often used to estimate power consumption by consumers.

But TDP is also often configurable, and manufacturers may decide to increase to decrease the value for higher performance or lower power consumption, so we’ll show you how to check the TDP value, or more exactly PL1 and PL2 power limits in both Windows 11 and Linux (Ubuntu 22.04). Note that TDP is being replaced by PBP (Processor Base Power) in newer processors, with PL1 (Long Duration) corresponding to BPB, and PL2 (Short Duration) to Maximum Turbo Power (MTP), at least on Intel chips.

Check the TDP values in Windows 11

You’ll first need to install HWiNFO64 program, then start it leaving all options unticked (default), and go to Control Processor(s) to select your processor. 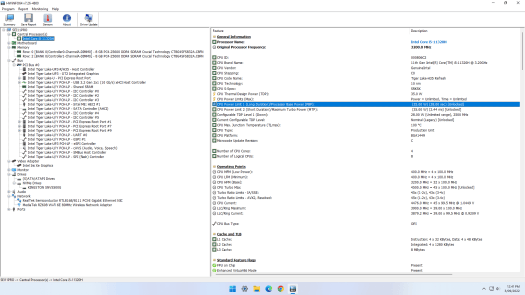 If you’d like to change the power limit values, you may want to check the BIOS/UEFI settings first, and if not available, there are tools such as RyzenAdj (for AMD), but some computer manufacturers will not let their users change the TDP.

We’ll use powercap-info command line utility to check the TDP settings. It;s found in powercap-utils package, can be installed as follows in Ubuntu/Debian distributions:

This is what the output looks like with an Intel processor:

If you’d like to change those, the best is to check the BIOS settings, but if it is not available, you may try to run the command powercap-set:

This will set a power cap of 25 Watts (25000000 uW) on zone 0, constraint 1. It’s somewhat complicated, so you may want to check out the documentation. The source code for both utilities and the library is also available on Github.

However, this is the output I have in Trigkey Speed S3 mini PC with an AMD Ryzen 5 3550H processor:

We don’t have such values with AMD, since the RAPL implementation is partial, except for more recent processors.

So instead, we’ll use RyzenAdj script.

We can now run the program to check out the parameters:

Based on the documentation, we have three power limits here expressed in Watts:

I could change all the Power Limits to 35W, and Tctl to 90 °C with the following command line.

Note it’s not always recommended to change those values, and you’d need to monitor your system temperature. CPU throttling may happen more often due to overheating and even lower the system performance and potentially longevity.

Most of the information was gathered from Ian’s mini PC reviews such as Beelink SEi11 Pro Review – An Intel Core i5-11320H mini PC tested with Windows 11, Ubuntu 22.04, and OS and Memory Impact on Mini PC Gaming Performance.

On Arch Linux the package is in AUR and named powercap