Radxa has been working on the ROCK 5 Compute Module (aka Radxa CM5) system-on-module compatible with Raspberry Pi CM4, but based on the more powerful Rockchip RK3588S octa-core Cortex-A76/A55 SoC.

Just like the Raspberry Pi Compute Module 4, it comes in a 55 x 40mm form factor, but instead of just two high-density 100-pin board-to-board connectors, the module includes three to cater for the additional I/Os from the Rockchip processor, just like they did for the Radxa CM3 equipped with a Rockchip RK3566 processor. 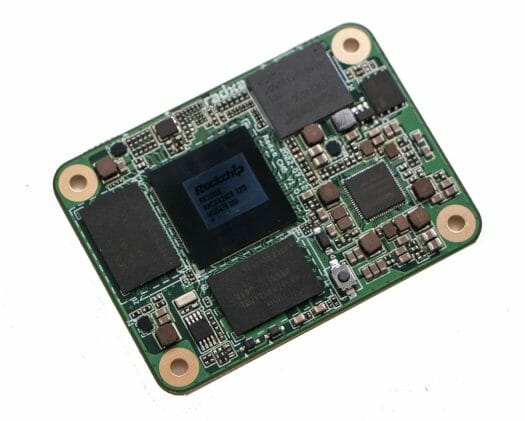 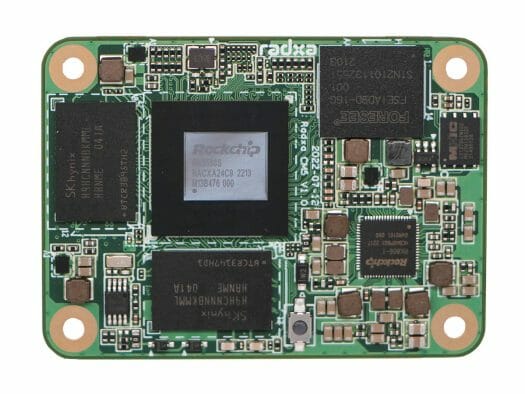 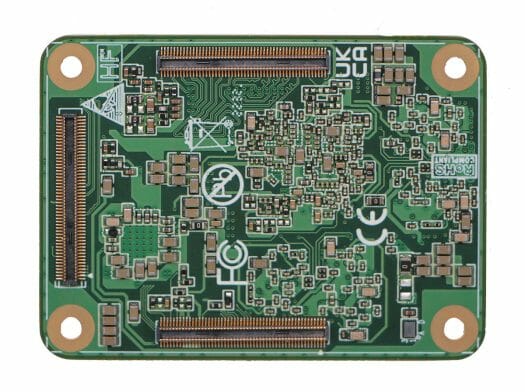 Radxa CM5 is designed to help people requiring custom carrier boards. It supports the same operating systems as the Rockchip RK3588-powered ROCK 5B single board computer including Ubuntu 20.04, Debian 11, and Android 12, plus Buildroot and the Yocto Project build system are also available.

The SoM can be used for Robotics, HMI, vending machines, Smart Home devices, IoT gateways, industrial controllers, medical equipment (TBC), and so on. It’s compatible with the ROCK3 Compute Module IO board, and should work on most carrier boards designed for the Raspberry Pi Compute Module 4 as well, although there are caveats, as we’ll discuss below. 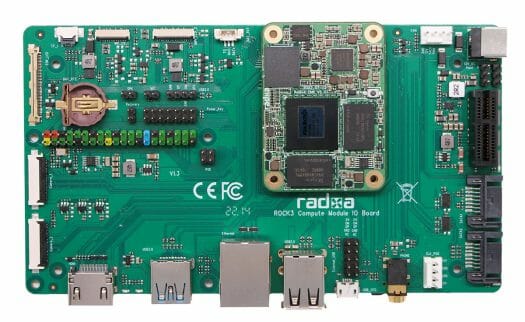 There will be exceptions, as some of the interfaces, such as the second HDMI interface, are missing, and the module is too small / the processor too big, to have enough space for a wireless module, so it would have implemented on the carrier board, or using a USB dongle. The module also lacks the Gigabit Ethernet PHY (such as RTL8211F) found on RPi CM4 and Radxa CM4, so I don’t see how Ethernet can work on existing carrier boards as well. Sadly, that means backward compatibility is limited and only works if you don’t need networking.

Besides working on a Rockchip RK3588S module with the Raspberry Pi CM4 form factor, the company is also prepping the Radxa NX5 SO-DIMM module that offers compatibility with NVIDIA Jetson Nano, TX2 NX, and Xavier NX system-on-modules. We’ll cover that one once we have more details.

Radxa guarantees the availability of the Radxa CM5 until at least September 2032, or a 10-year long-term supply commitment. We don’t have pricing information just yet, but I’d expect the Radxa CM5 to cost a bit more than the Radxa CM3 or Raspberry Pi CM4. A few additional details may be found on the wiki.

AS someone who signed on to the TuringPi 2 Kickstarter, would this be essentially the same as the RK1?

Read the details about ‘Ethernet PHY’. A ‘cluster’ without networking doesn’t sound that great, also needing to buy a carrier board for each module since this Turing thing uses SO-DIMM sockets.

The good news: on this picture a GbE PHY can be seen:

Hopefully with their partnership with RS/okdo they can start to deliver in quantities.

That is must have
as we will not be able to use it on boards like
https://www.cnx-software.com/2022/08/24/deskpi-super6c-mini-itx-board-takes-up-to-6x-raspberry-pi-cm4-modules/

If they ditched the Ethernet PHY just because they don’t have enough space on the PCB, they should rather ditch the eMMC memory. Most carrier boards have a usb/sd-card slot anyways

They should add a little to there product prices, then use the money on software support.

Care to elaborate on that? How should a board vendor provide a ‘mainline device-tree’ if the process as a whole is broken by design? In the sense of taking years until everything works (if it ever does). You should better know than most that upstreaming an ARM SoC usually takes until the hardware is obsolete.

Is there something for Rockchip comparable to linux-sunxi’s Status Matrix?

There is the quartz64 development page, but it is unfortunately pine64 specific.

> it is unfortunately pine64 specific.

Thank you! Reflecting more or less RK356x in general 🙂

RK3399 is a 2015 design that appeared on consumer hardware in 2016. Rockchip employees started mainlining in Aug 2016 (Armbian’s Chief Advertising Officer still tries to create the impression ‘Armbian’ would’ve done all the work) and when looking at Linux 5.19 changelog 6 years later there are still plenty of RK3399 (device-tree) related fixes.

Not true with Rockchip that work on mainline kernel and Linux 5.19 have already some parts of RK3588 drivers. But could take more time with GPU as ARM doesn’t release their specs and Rockchip probably have NDA, so Panfrost driver authors need to reverse drivers. Maybe the amount of work made on other generation will reduce the needs for this one? RISC-V opensource GPU progress step by step, hope we will see it soon in real (ASIC) hardware, with ARM or RISC-V CPU based SoC, this will greatly simplify the support process. I would really appreciate a good RISC-V Rockchip… Read more »

There are several Chinese Risc-V boards we outside China hardly hear about.

> Not true with Rockchip that work on mainline kernel Sure but the whole mainlining process will take years as we can see with RK3399. It happens in small slices and sometimes patchsets need up to 10 revisions which will take months for a simple feature like e.g. USB until stuff gets accepted and becomes part of vanilla mainline kernel. As such a board vendor can only provide ‘a basic DT’ if starting to collect the patchsets floating around maintaining themselves. As it’s done for example by Hardkernel’s Dongjin (tobetter) or Oleg (balbes150) with his media kernel. Only then a… Read more »

IMHO the kernel pieces for rk356x are already there, there’s a few rk356x boards working well (enough for me at least) on armbian 5.19 kernels including rock3a, but yeah I suppose those are still patchsets.