Xtreamer mxV is a family of TV boxes powered by Amlogic S905 processor, and supporting Android 5.1 and OpenELEC firmware provided by the company [Update: It looks like they simply used Vitmos/amlinux.ru image]. There are three models: mxV without tuner, mxV Plus with a DVB-T2 tuner, and mvX Pro with a DVB-T2/DVB-S2 combo tuners.

The device ships with IR remote control, a quick instruction guide, an HDMI cable, and a 12V/1A AC/DC power adapter. If the design and specs looks similar, it’s because mxV is based on K1 Plus, and mxV Pro on K1 Plus T2/S2. According to a post on Freaktab, mxV firmware either Android 5.1. called “Xtreamer Android TV OS” and supporting OTA firmware updates, or OpenELEC OS released by the company also work on K1 Plus devices. K1 Plus DVB TV boxes have supported OpenELEC (Vitmos build) for several months already, but the Xtreamer version appears to be officially supported by the company. 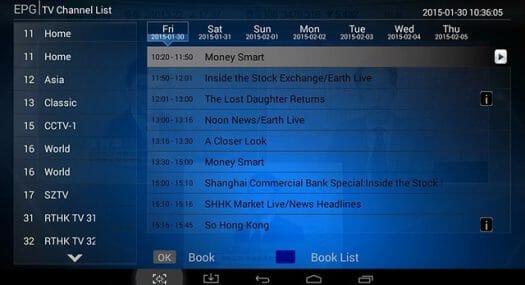 Xtreamer boxes are also reasonably priced with mxV selling for 39 Euros, mxV Plus for 49 Euros, and mxV Pro for 59 Euros. At first prices in Euros made me think it was sold from Europe, avoiding custom issues (e.g. “my” WeTek Play 2 has been stuck in customs for 3 weeks with basically no hope of getting it out) and extra duties, but it’s actually shipped from Hong Kong. You can find more information and/or purchase the devices on Xtreamer mxV product pages.

Thanks to Slowstream for the tip.

mxV is similar to Videostrong boxes. Does mxV Plus support DVB-C too?

@Gabe
I think it’s exactly the same hardware, so it should support the same features as K1 Plus.

@Abdulbasit
What are you doing with your boxes?

I bought k1 mainly as a DVB-S2 and thought it might be useful as Android device for surfing the internet and watching YouTube but the YouTube app can’t play any video , the apps are extremely slow and google play doesn’t open either . So i bought K1 plus from AliExpress and slightly better than k1 but the problem is still with slow apps (YouTube works but exits every few minutes). I installed KODI and added youtube plugin but that isn’t convenient and i use it now as a “normal” DVB-S BTW, do you recommend any Android/DVB-S2 that can run… Read more »

@Abdulbasit
It was fine during the review, but maybe overtime the memory gets “eaten” so 1GB could be the issue here.
I can’t recommend it yet since I have not tested it, but WeTek Play 2 would fulfill your requirements.
Videostrong K2 Pro too -> http://www.aliexpress.com/item/KII-PRO-S905-DVB-Android-5-1-1-OS-Amlogic-S905-Quad-core-64-bit-TV/32716909454.html

I have mxV Pro. Software for android is terrible, DTV app used to watch tv displays some items off-screen. And it looks like Android TV, but it’s not. UX of DTV is terrible, when i run it, it ask me if i want to use DVB-T or DVB-S tuner. Second system is Openelec, it work good as video player like any devices like my Orange Pi One, but i have bought it for DVB-S2 and in this position it’s slow. I’m using Tvheadend client and server which i have to install manually so maybe i made some mistakes. It wasn’t… Read more »

@Jean-Luc Aufranc (CNXSoft)
Thank you. For now i’m testing image from http://amlinux.ru/image/905/ and it’s much faster than factory OpenELEC, but still it’s really slow in comparision with enigma 2 box.

“OpenELEC OS released by the company also work on K1 Plus devices”
Xtreamer did not do themselves, they used free firmware from amlinux.ru

@alex
So they just took that version (Vitmos), and claimed it as theirs?

Well, sorry for the tip then 🙁

@slowstream
Still a good tip, as it eventually showed the malpractice of the company.