Rockchip RK3288 quad core Arm Cortex A17 processor was first released in early 2014 with Android 4.4, and TV boxes that are still sold with the processor – e.g. Lenovo G66 – often still come with Android 4.4 or Android 5.1, and development boards do barely better as ASUS Tinker Board supports Android 6.0.1, while Firefly-RK3288 may never get its expected Marshmallow update.

However, Ugoos decided to support their RK3288 TV boxes for a longer time, and has now released a beta version of Android 7.1.2 firmware for Ugoos UM3, UT3, and UT3s TV boxes.

Some of the features and Ugoos specific settings available in the firmware include: 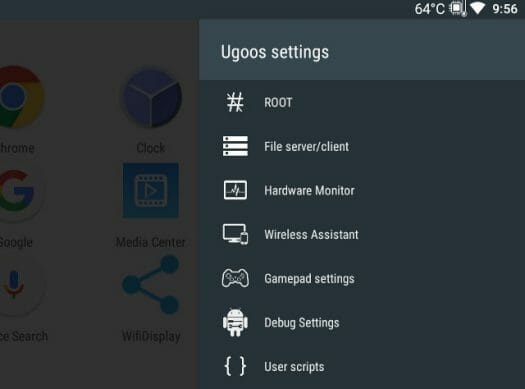 If you want more details about what each setting does, read the post about Ugoos settings.

Try try it out with your Ugoos TV box, download the firmware file from MEGA, and flash it with Android Tool in Windows. I you own a Ugoos UT3+ TV box, you’d have to wait a little longer, since the company is still working on HDMI input in Android Nougat.

Amazing. I ever thought there is no way to get Android 7 on the RK3288 because of it is an 32bit soc. And from Android 7 and up google will support only 64bit architecture.
I did download it for my UT3 but not tried to install it yet. I am some kind of a burnt child if it about upgrading ARM based devices. I tend to brick them.
I am still sad for my ZTE Open C. All debricking tips did not help. Anyway..

Hurray to Ugoos! That is a long supporting time.

Android 8 is out now though….

Great, news unfortunately my Ugoos UT3s just died like a month ago, so I had to replace it with a H96 PRO, which is way weaker on the graphics side and it crashes more often compared to Ugoos UT3s. It was the lack of options that pulled me to H96 PRO, it has his pluses too, but from many points of view it wasn’t an upgrade.

UM3 fw on my cloudnet cr12 box w ap 6330 wifi. Loaded with Android tool under firmware update mode , no issue. Wifi working and Ethernet. However the box randomly shuts off showing a red light. There are options to see the cpu activity but they are tiny to the eye. I’m letting it cool down at the moment then if when at resting there remain issue will try other 7.1 ugoos firmware.

@cnx… To add to & end with on the Ugoos nougat 7.1.2 fw, I have it running on a Cloudnet cr12 rk3288 with no issue at this time. Earlier though the unit shut down due to overheating. Partly due to a loose heatsink and too many process’. I reboot the unit and install Kernel Auditor, under clocked cpu from 1750 to 1200 , set governor to conservative SC thru developer options limited to 3 background process. cpu temp is running st 64-72 °f rather than 98f before so i won’t put 50 apps on s 4 yr old box but… Read more »